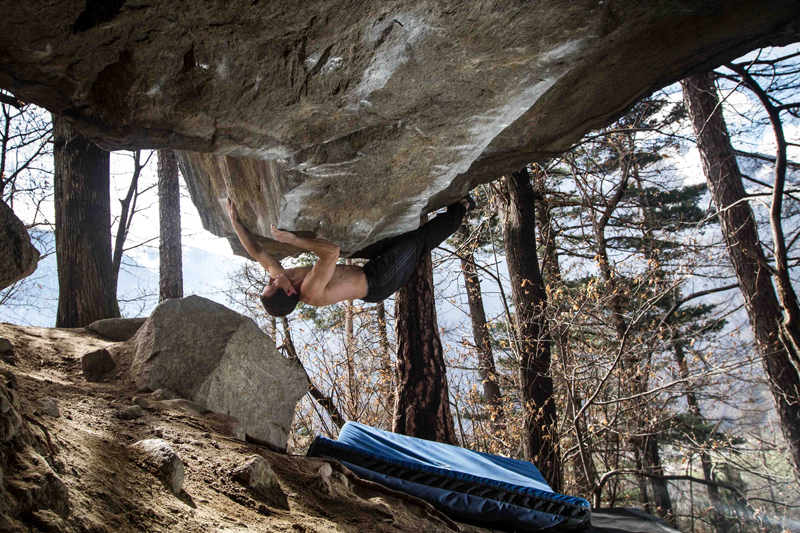 “It really started to get in my head,” Traversi told Rock and Ice “and even as I continued to get stronger on the problem, my motivation waned. I felt like I had already climbed the problem so many times, it was getting harder to want the actual send.”

Traversi’s prowess when it comes to sending V15s quickly has become internationally known. In fact, just last month Traversi took a trip to Red Rocks, Nevada and dispatched the V15 arete Meadowlark Lemon in a matter of days. But The Story of Two Worlds still kept Traversi at bay.

“Punted off the easy finish of The Story of 2 Worlds today and I am definitely starting to feel the drain of such a mental battle,” wrote Traversi on Facebook. “In the past I have gotten used to always being able to pull it together quickly in the clutch, especially on outdoor climbs. For some reason, this particular problem is hell bent on taking me for all that I have.”

Traversi stuck with it, however, making a total of three trips to Cresciano, Switzerland, to finish off Dave Graham’s testpiece, The Story of Two Worlds.

Rock and Ice caught up with Traversi to learn more about Traversi’s hardest send.

How did your battle with The Story of Two World’s begin?

After finishing The Dagger V13/V14 in 2010, I immediately began checking out the lower moves that comprise The Story Of Two Worlds. I managed to climb from the start of the Story into The Dagger fairly quickly, but didn’t put much time into trying to finish the line that trip. It was my first trip to Switzerland and I didn’t wanted to delve into any massive, time-consuming projects. However, after that trip the idea that The Story was possible for me always lingered in my head. A return was necessary.

Can you describe the problem?

The Story of Two Worlds is the low/sit start to The Dagger. It adds a 6 move V12 into The Dagger. But The Dagger is a fairly involved, long problem to begin with. So simply adding moves really takes things up a notch. The start hold situation is fairly complicated at this point. Each method has it’s own story and rationale behind it. I’m not really willing to delve into that history. The important thing to me is that I climbed the boulder from where I wanted (and was originally told) to start it and this happened to be a few moves lower than where the first ascentionist [Dave Graham] started. I wanted to finish the battle from where I had always started it.

I know this problem put up a fight. What was happening? Was it mental, physical, or both?

I returned to Switzerland this past fall with the intention of finishing the problem as the temperatures cooled down in late November. I spent a day re-learning the moves and then the next day managed to fall off the finish. It then rained for the remaining 4 out of 5 days left in my trip and on the final day I fell off the finish a number of times. It was heart breaking to leave, but I accepted the failure and vowed to return when I was allowed back into Europe (Schengen only allows 3 months in, followed by 3 months out). When I returned to Swiss a few weeks ago, I set to work immediately and on the first day got close. And then I managed to fall off the last hard move for at least 4 more days. My beta was wired, my body was fit, but I was just making stupid mistakes. It really started to get in my head and even as I continued to get stronger on the problem, my motivation waned. I felt like I had already climbed the problem so many times, it was getting harder to want the actual send. Definitely one of the most difficult mental battles that I’ve gone through.

How did you finally break through?

I took a few rest days, healed some of the splits in my fingers that had been plaguing me, and returned fresh and ready to go. Sent first try of the day and it never felt easier. I actually made more mistakes on the send go than most of my other efforts, but I think mentally I was ready to finish it no matter what.

Is this you hardest repeat to date?

Yes. Considering the physical nature of the climbing and the mental struggle that it put me through, it definitely sits at the top of the list for now.

There are more five star projects in Ticino than I’ve seen anywhere else in the world. I’m psyched on trying to finish at least a few of them before returning back to the USA next week.