You’ve probably heard of Yuji Hirayama’s first ascents up to 9a+ (5.15a) and his speed ascents of El Capitan. Or maybe you remember that he was the first climber to onsight 8c (5.14b), climbing White Zombie, in 2004. He’s also won two Lead World Cups and has developed and bagged boulder problems up to V14.

It’s no secret that Hirayama has excelled at all disciplines of climbing during his long career. 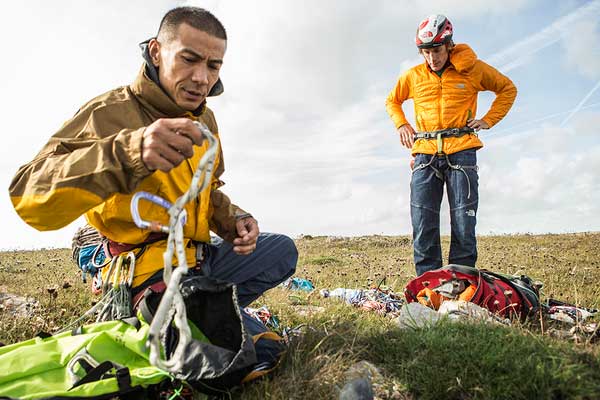 Now, the 45-year-old climbing polymath has traveled to Pembroke, Wales, to test himself on the infamous trad climbs of the UK. With James Pearson and Caroline Ciavaldini acting as tour guides, Hirayama warmed up on an E3 (5.11) and an E5 6b (5.12) before he turned to an area testpiece, The Big Issue (E9 6c/5.13+ R), which he quickly sent while placing all his gear on lead.

Hirayama then headed north to the sandstone walls of Nesscliffe, North Wales, where he headpointed the classic My Piano (E8/5.13 R).

Rock and Ice contacted Hirayama to hear his thoughts on UK climbing.

It was like steep 5.13c sport climbing, but you have to place trad gear. So climbing it was really physical, and you can’t spend too much time placing the gear because you can easily get pumped. You can only spend seconds placing the gear.

What do you like best about trad climbing in the UK?

I think the self-control. I know what to do when I look at a sport route, but I didn’t know exactly what to do in some of the dangerous parts of the trad routes there.

How did you feel after a few days testing yourself on UK trad?

I feel like I want to see more of the UK climbing culture! I’m happy that I could use my background in this kind of climbing during my time in the UK.