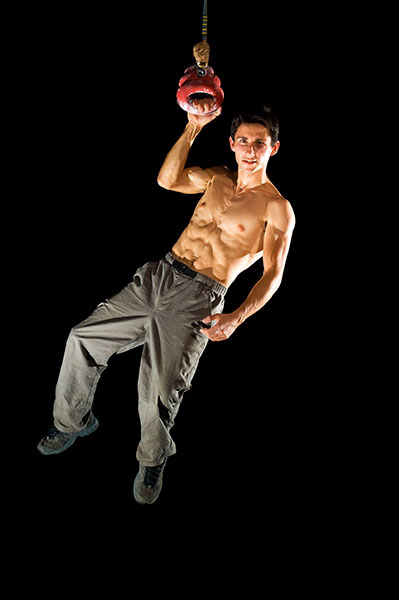 Ramon Julian Puigblanque has established three new 5.14 routes in Spain–one 5.14b, one 5.14c, and one 5.14d. This formidable Spanish climber has performed at the top level of competitions for years, often dominating the lead climbing circuit of the World Cup; but his skills on the rock are just as impressive. In 2011, he blew the American climbing community away by visiting Rifle, Colorado and onsighting Living in Fear (5.13d) and The Crew (5.14c) in one afternoon.

Recently, on March 24 Julian worked on a new 5.14d called La Parada de los Monstruos, or Stop the Monsters, in Montanejos, Spain. He ended up leaving the project unfinished for the day due to some wet holds. “Then on Sunday we went back and I tried to send the route,” Julian wrote on his blog, ramonjulian.blogspot.com. “On my second try I was finally able to send this impressive 45-meter route. I call it La Parada de los Monstruos and I propose a grade of 5.14d.”

Next up Julian went to the Pilas Alcalinas area. “I decided to try a climb called Exotica (5.14c) there, but I couldn’t do it because the crux was wet, and I encountered the same thing on the nearby project The Machinist (5.15a), which I also wanted to try but gave up on because it was wet.”

Still, Julian continued his parade of hard sport climbing and achieved a new link-up of two 5.14a’s in the Pont de Valenti area on Tuesday, March 26. “I was able to link up Orion (5.14a) and Mariscada (5.14a), still doing the hard parts of both routes, and ended up with a great 5.14b route,” wrote Julian.

On Thursday, March 28 Julian moved on to Monserrat to climb at La Balma de Gaiato. After warming up, he set to work on El noi de Manlleu (5.14c).

“I had been trying this route for about eight or nine years, and I knew there was a hard dyno from a monopocket to a sloper. After trying it again and working through the movements, I gave it two tries and fell both times at the dyno. Then finally on the next try I made it through the dyno and through an endurance section on tiny pockets, and finally sent the route, El noi de Manlleu, for which I propose a grade of 5.14c.”

Translations from Spanish by the author.

Top News of the Day