Some people would rather climb with two handfuls of flappers than go anywhere near a campus board, but training doesn’t have to be miserable. For those newer climbers out there who have already mastered basic technique and who want to improve without losing sight of the fun, there are a slew of ways to get creative with your approach to training. 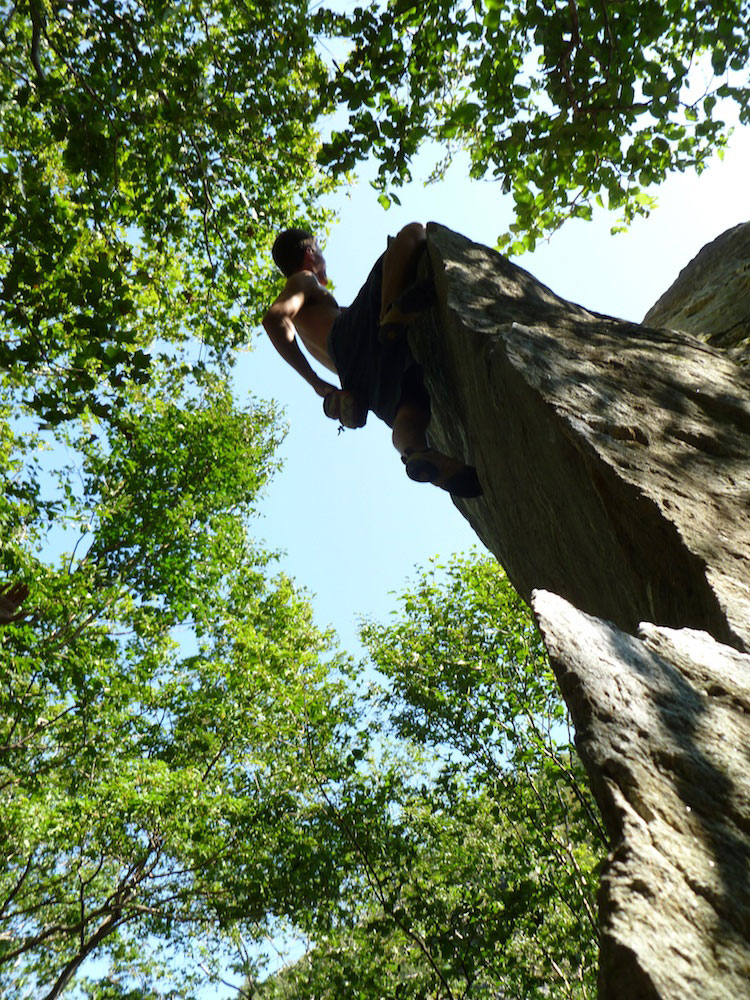 One surefire way to take the “blah” out of training is to bring it outside. Tony Yao, coach and 21-year climber, says he’ll climb outside with a specific fitness goal:

“For example,” says Yao, “I’ll go outside and go bouldering with the mindset that I’m going to get more power out of my climbing. And then I’ll go to a rope climbing area that I’m familiar with that has a large density of routes and I can train volume.

“The type of training depends on the area that you go to.”

Tilde Bombardo, director of programs at CityRock climbing gym and 15-year climber, also emphasizes the importance of taking the time to get outside.

“Climbing is an individual sport, but also a group sport where people share the pleasure of being outside, of being with other people, of camping, and hiking,” says Bombardo.

She adds an interesting perspective, as she is currently pregnant but climbs 5.12 in her regular state: “After a really long time of doing this, you realize how important the social aspect is, and having fun.”

The fun factor: Sun, real rock, fresh air, friends. All of it!

Elimination: Alone or with a group of friends, choose a boulder problem, route, or section of wall to traverse. Each time a climber sends or traverses through, that climber “eliminates” a hold and for the rest of the round, that hold cannot be used. The game gets continuously harder each time a climber cycles through and the round ends once everyone has fallen. Pick a new route or section of wall and keep playing! The larger the group, the faster each round.

Add-on: The opposite of Elimination—with a group, create a route hold-by-hold. After choosing a start hold, the first climber “adds on” the next hold while on the wall. The second climber must use the same hold as the first before adding another, etc. Each climber must use the established hold sequence to the end of the route before adding on the next. Once someone falls, he or she is either eliminated, gets a letter (like in P.I.G. or H.O.R.S.E.) or keeps playing, depending on what you feel like. There are many variations to this game, and its level of difficulty is completely up to you! Climbers can add one or more holds each turn, and footholds can be in play too. Or, try playing with all feet considered on (it’s both easier for climbing and for memory). Like Elimination, the round is over when there is only one climber left.

The fun factor: These games are social, can be played in groups of any size and ability level, and help stimulate a little healthy competition! 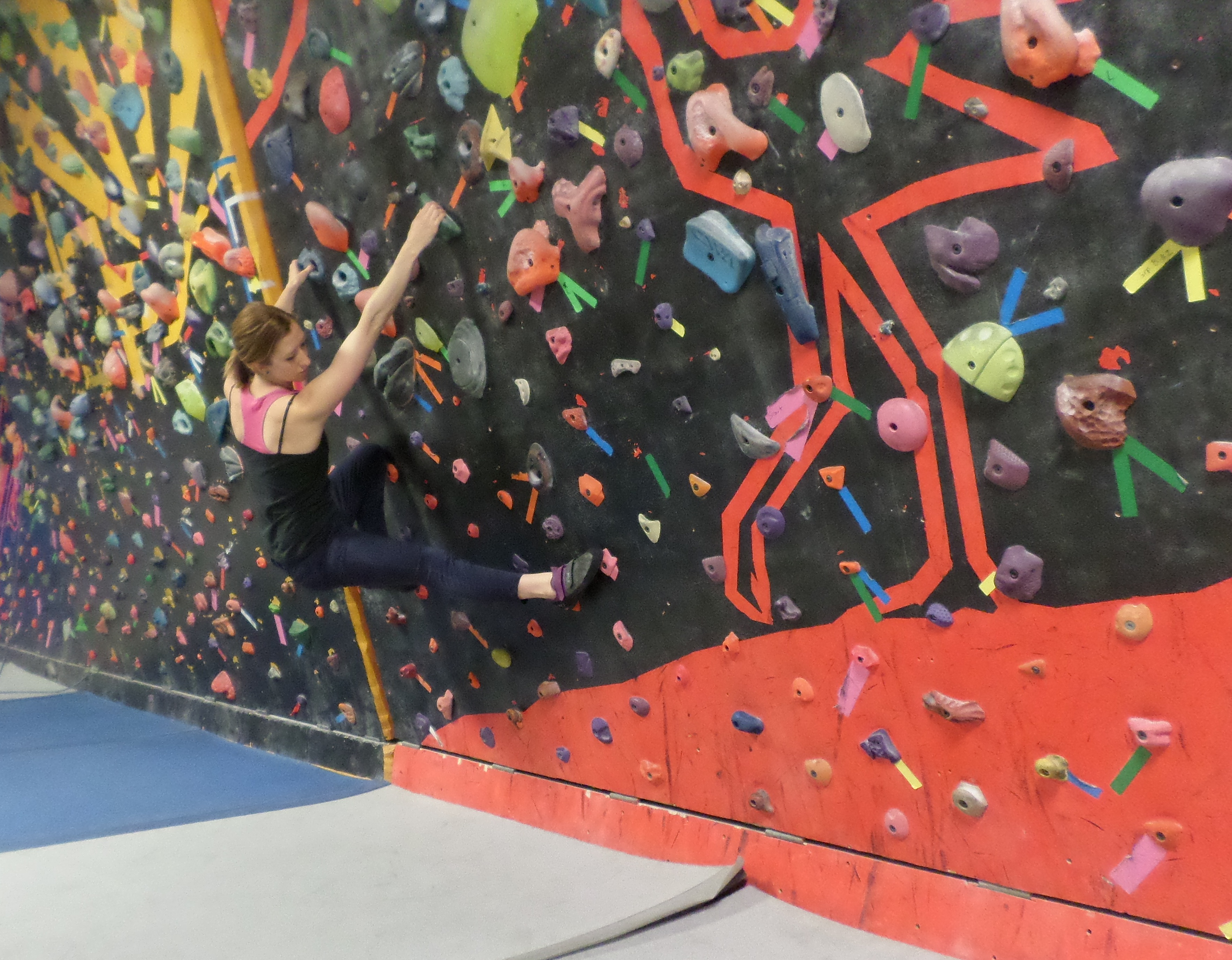 If you’ve been climbing for awhile, you’ve probably heard ten thousand times about the importance of footwork. But what can you actually do in your climbing to work on it?

Bombardo says, “It’s kind of funny, between the kids classes, youth program, and adults there is a kind of similarity: The [simpler] you keep the exercise, the more it’s enjoyable.”

She discusses two footwork-related activities that help both children and adults adjust their perspective and pay more attention to their feet: The “Quiet Feet Race” game, in which you touch each hold without making a noise, and the “Octopus” game, where you hold on to one spot with your hands and touch as many holds around you as you can reach with your feet.

And if you’re still not convinced of the importance of strong footwork, take Bombardo’s advice: “When you climb, sometimes it’s the [action] of that little bit of moving your feet, changing your position from where you’re going,” that makes the difference between accomplishing the next move and falling.

The fun factor: Try the “Quiet Feet” or “Octopus Game” on a traverse route or an easy sport route. Or, if you’d rather, imagine you’re a ninja and any noise you make on the wall with your feet will give you away. No need to feel silly: No one will know what’s going on in your head. Plus, if you’re doing it right, no one will notice you’re on the wall anyways.

Redpointing, or attempting to climb a route that’s at or just beyond your limit without falling, is an activity that combines many different training techniques, both physical and mental. According to Yao, first be certain that “you know all the moves, you’ve already rehearsed them, you can do them one by one.”

He adds an important note that you should be mindful of where to rest on the route so you’re not “hanging on the rope, but get recovered enough that you can keep going.”

In addition, pay attention to your beta. Make sure you’re not doing something different every time, but instead, know what each movement will look and feel like. The result is muscle memory.

“Your body starts to learn it and to climb more efficiently,” says Yao.

The fun factor: Set a goal for yourself to redpoint a certain number of routes in a week, or a grade you’ve never accomplished before. When you achieve it, it won’t seem like you’ve just completed any hardcore training—but your body and mind will know differently. 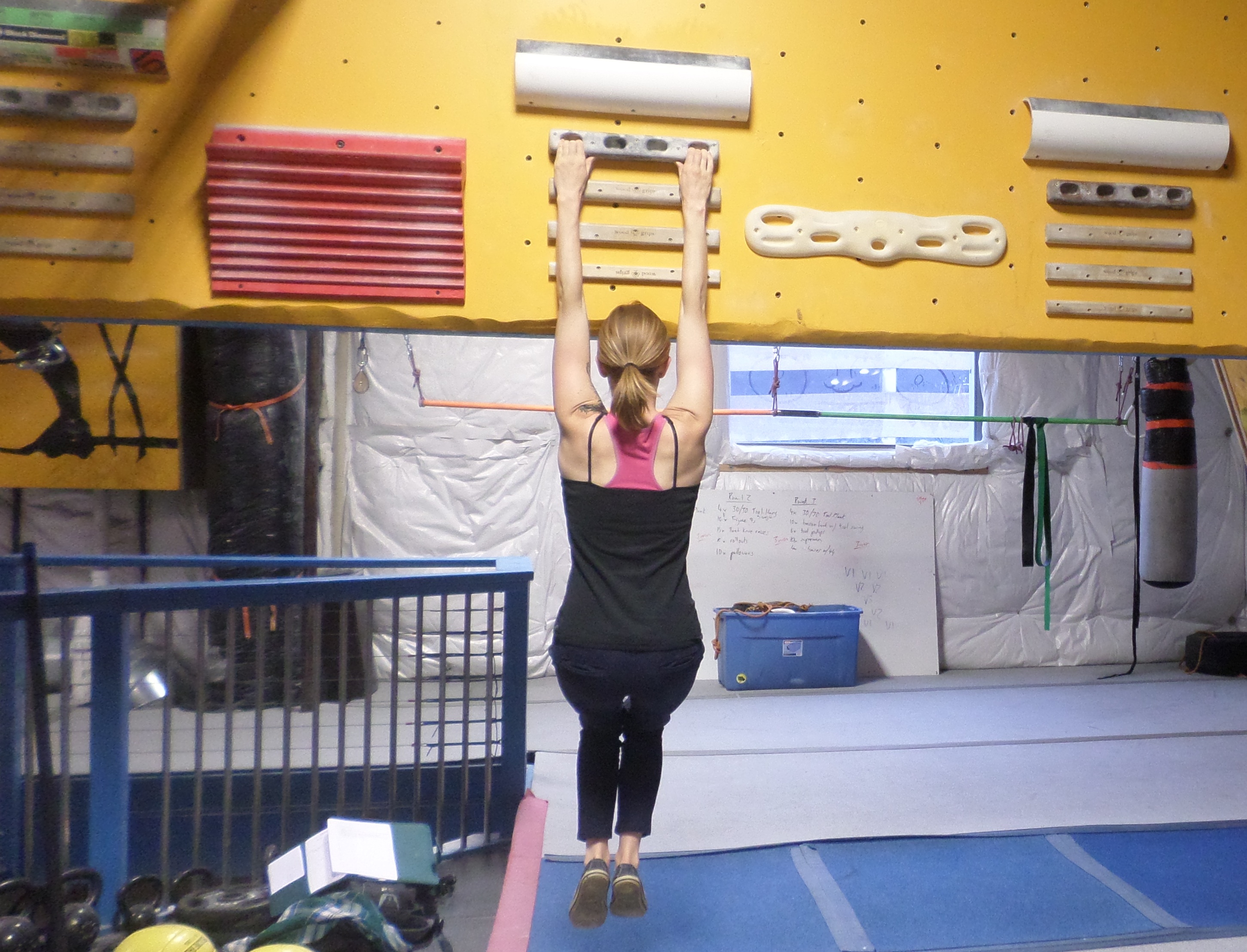 Dangling from a hangboard doesn’t provide the same adrenaline rush as trying out that new route or sending your project. But, there’s no better bang-for-buck activity to build finger strength.

Yao recommends “repeaters,” where you pick a hold on a hangboard and dead-hang for seven seconds on, three seconds off, for seven reps.

It’s easy to adjust the difficultly of the exercise by choosing different sized holds to hang from. For more advanced climbers, a smaller edge or added weight can increase the intensity. A pulley system, or friend to assist, can do the opposite by helping to take weight off.

The fun factor: Try these hanging repeaters on the holds of a favorite boulder problem instead of a hangboard, a sturdy ledge or doorframe at home, or on real rock outside.

Bombardo draws an interesting comparison between the youth she teaches and the adults. “The difference [with] the adults is that they are more conscious of how afraid they are. Kids are less conscious about it.

While the mental component of climbing is complex the subject of entire books (check out The Rock Warrior’s Way by Arno Ilgner or Vertical Mind by Don McGrath and Jeff Elison), here are a couple of fun ways to ward off anxiety and fear:

Try top-roping with a blindfold on. Because humans rely heavily on eyesight, taking it away forces you to pay extra attention to the position of your body and the feel of the holds—not to mention, it’s also a good endurance exercise because you’ll spend more time on the wall feeling for that next hold!

Bombardo recommends all climbers take time to stop and truly feel your body: “You can feel your muscle, the balance, you can actually feel where you are wasting energy.”

Another mental exercise is to practice falling from progressive heights, both while top-roping and lead climbing. Not only will this help eradicate fear of heights but it’ll also help you put more trust in your gear.

The fun factor: Mental training, unlike fingerboard training, can happen at any time during your climb. You can practice being more mindful of your clipping technique when leading, your precision when bouldering, and your head-to-toe balance while working a slab. Even in daily life, paying closer attention to your movements and feelings will later serve you on the rock.

Combining climbing with complementary activities like yoga, dance, swimming, running, or cycling offers a wealth of benefits. Bombardo says that when you approach the rock, “It makes you feel hard…it’s not like swimming, where you become fluid. You should be fluid on the rock.”

Bombardo recommends yoga as the perfect pairing for climbing, primarily for its breathing techniques. “[You’re] keeping your muscles contracted [while climbing] and thinking about the moves…so you should learn how to breathe.”

The fun factor: Cross-training not only improves your physical climbing with increased strength, endurance and flexibility, but revamps your passion by giving you a sometimes need break. It’s also a great way to prevent overuse injuries.