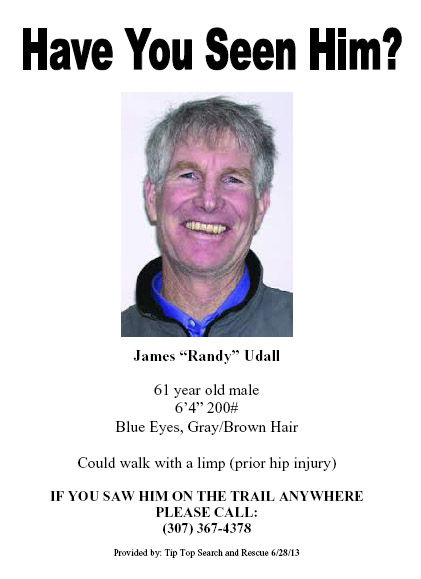 James Randall “Randy” Udall, 61, is reported missing in the Wind Rivers of Wyoming this week after failing to return from a solo backpacking trip last Wednesday.

A former Outward Bound instructor, Udall is part of two families prominent in political, academic and mountaineering circles, and has been active in the mountains for decades. Lou Dawson of wildsnow.com notes that Randy has pioneered remote ski-mountaineering traverses in the Sierra and on Baffin Island.

“If anyone could survive some sort of problem in the backcountry it would be Randall, so we are optimistic,” Dawson writes. “Nonetheless the clock is ticking. Many people have experience backcountry traveling in this area of the Wind River. If you do, apparently SAR could use your help in the ground search.”

Udall, who signed in on June 20 for a solo backpacking trip from the Elkhart Park trailhead, in the Wind Rivers, was expected to return Wednesday, June 26. He has logged many backpacking visits to the area.

Udall and his wife, Leslie Emerson, of Carbondale, Colorado, are both former Outward Bound instructors, and one of their three children is an OBS instructor.

Calvin Lee, an attorney and climber from Glenwood Springs, Colorado, who knows Udall through their mutual environmental activism, last “ran into” Udall and Leslie out hiking at the top of the East Creek drainage above Redstone, Colorado. Lee notes, “I do know he is a bright and resourceful guy, so hopefully he is just waiting for a rescue or making his way out.”

Randy Udall is one of the nation’s leading environmentalists, the founder and former director of the Community Office for Resource Efficiency (CORE), which according to Global Public Media achieved the state’s first solar-energy incentive program and the world’s first Renewable Energy Mitigation Program. He has written extensively on environmental issues, and is a particular critic of the practice of hydraulic fracking.

The son of Morris Udall of Arizona, 30-year member of Congress and longtime chair of the U.S. House of Representatives Committee on Interior and Insular Affairs, Udall is the brother of Senator Mark Udall of Colorado and the cousin of Senator Tom Udall of New Mexico, both mountaineers. Mark Udall is former executive director of Colorado Outward Bound and a longtime technical and alpine climber who attempted Everest in a party of six in 1994 (an early era for a small team). Mark has also climbed Kangchenjunga, Nepal; Denali, Alaska, via the difficult Cassin Ridge; and, in Argentina, Aconcogua via the steep and committing South Face (Messner Route). He also attempted Nanga Parbat and Cho Oyu in the Himalaya. According to the Outdoor Industry Association, Mark has additionally climbed all of Colorado’s 14,000-foot peaks, Mount Rainier’s Liberty Ridge and the Diamond Face of Longs Peak, Rocky Mountain National Park.

Leslie Emerson, a former school principal and now director of the Roaring Fork School District Pre-Collegiate program, grew up spending time in the Tetons, where her father was a climbing ranger. Richard “Dick” Emerson was an admirably solid member of the American Everest Expedition of 1963, which put the first American on top of the mountain and pushed the first ascent of the formidable West Ridge (see feature in Rock and Ice no. 211, Click Here to access the digital edition). Dick Emerson supported the offshoot West Ridge effort, a visionary and very uncertain objective, and was a perceptive and fair voice in team discussions. Emerson’s climbing partners and peers included Willi Unsoeld and Leigh Ortenberger, with whom, in 1953, he established a direct finish on the North Face of the Grand Teton. Tom Hornbein, who with Unsoeld ascended the West Ridge of Everest, was another longtime friend. Emerson was a professor of sociology at the University of Washington and a leading sociologist. The World of Sociology writes, “Richard M. Emerson influenced the study of social structure by introducing the theory of social exchange, which broke new ground.”

Steve Matous, a mountain guide, former Access Fund executive director, and longtime climbing partner of Mark Udall, tells us: “Never good to be overdue this long but knowing Randy I am certain he could survive if there is nothing major wrong with him. I worked as a staff member on a winter Outward Bound course for him and know he has the strength and knowledge to do well under any circumstances. As far as his technical background, he was never a ‘rock jock’ but certainly was capable in fifth-class climbing and very used to traveling third class in the mountains where many others would be using a rope.

“I [saw] Leslie last October and know they kept up with their outdoor adventures over the years. All the Udall men have spent a fair amount of time traveling alone in the wilderness over the decades so I see this as neither unusual nor concerning except for the fact of being overdue.”