Savvy always talked a lot about what she wanted in her life after college—what she might like to do, where she hoped to go. She told me she loved Chicago, where her parents live, because of things like the music scene and their donuts; she told me she would love to move West—maybe to Colorado, maybe California; she said she wanted to go somewhere with bubbling culture, but that also had easy access to the outdoors and great concert venues. She told me she wanted to make a positive influence on the climbing community with regards to eating disorders and people’s self and body images, things she had personal experience with. But at the end of the day, even with the mountain of things she was telling me still growing, she would just giggle and say, “There’s just too many things I’m passionate about—I just want to do it ALL,” and then let out a drawn-out exhale.

On March 28, 2018, Savannah Buik, 22, was climbing on the sharp end at Devil’s Lake, wearing her helmet as she always did while trad climbing, when she fell and ripped two of her pieces out and decked. A rescue call was made immediately, however there were no signs of a pulse and she wasn’t breathing. That evening I got a text message from a mutual friend with the news.

I first met Savannah in 2012 in Atlanta at a local climbing gym at a pre-Youth Nationals training camp.  She had just started climbing and was in high school and I was one of the US Team coaches. Most other participants in the camp had been climbing for years and were preparing to compete at Youth National Championships. Despite her comparative newness to the sport, Savannah’s desire to learn and to be great rivaled those who had already done big things. She would leave all of herself on the wall, screaming on gritty moves all while smiling in joy regardless of whether or not she found success.

After the camp, we tried to meet at the Red River Gorge a couple of times, but she was busy with college and working on laying a solid foundation for herself. Savannah struggled with an eating disorder and mental illness growing up and made a several attempts at recovery while she lived in Atlanta, but the first few attempts didn’t work out the way she wanted. After her first year at college, she decided she needed to move away and start from scratch to really recover and turn her life around, so she headed to Chicago, where her parents, Nina and Courtney, had relocated.

Savvy worked hard to take control and create a good foundation for herself, eventually recovering with the help of doctors, therapists, nutritionists, family and friends. And it was all on her own terms.

Through all of this, she kept in touch. Savvy always made an effort. Even seven weeks ago, as I was preparing for shoulder surgery, she called me and left a goofy, uplifting voicemail wishing me luck and letting me know she was with me in spirit. She liked to say,“Just reach out,” and that phrase cycles through my mind daily. 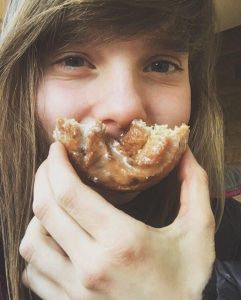 Savannah became like a little sister to me when she moved to Colorado in the summer of 2017 for an internship at the American Alpine Club, where I happened to be working, too. She would often sit at my desk with me or on the floor in a little nook between filing cabinets. We talked for hours about life, people, boys, climbing, school, careers, donuts, places to live and visit, and made plans for many adventures in our futures.  One day she said, though she had thought herself an introvert her whole life, “I’m not so much anymore, I’m learning that people really make me happy. I’m learning so much this summer, it’s my first time on my own.”

We had raucous, good times that summer. We road-tripped to her favorite town, Lander, for the International Climbers Festival along with a good friend, Alex Aristei.  Upon checking into our hotel, the front desk staff made a comment to us about Savannah being our daughter, and I was flabbergasted: How on earth could Alex and I look old enough to have a daughter Savannah’s age? But it stuck with us for the remainder of the trip—we took a family photo and everything.

One day last summer she came bouncing into my car telling me about an interview she had just conducted with Kris Hampton, of Power Company Climbing, discussing eating disorders. She was ready for her story to be told to a broader audience she said: “I really want to make a difference; I really want people to hear my message and maybe it will help them in one way or another.” She realized that she could make a difference for non-climbers struggling with eating disorders and so she sought out Project HEAL—a non-profit organization focused on prevention, treatment and recovery support for those suffering from eating disorders—after she began getting private messages from kids struggling with similar issues who were finding inspiration in her Instagram stories.

On March 16, 2018, less than two weeks before her final climb, Savannah posted on Facebook telling everyone that she was stoked that it was Devil’s Lake season. The temps were prime and her stoke was high. She was in the homestretch of her degree and had recently landed an internship with Project HEAL. Her life was just beginning and she had so many big dreams. The message of her post was one of optimism and hope: “You just have to come with an open, HUMBLE mind, and most importantly a forgiving spirit.”

To read some of Savannah’s own writing on climbing and eating disorders, visit her blog here.