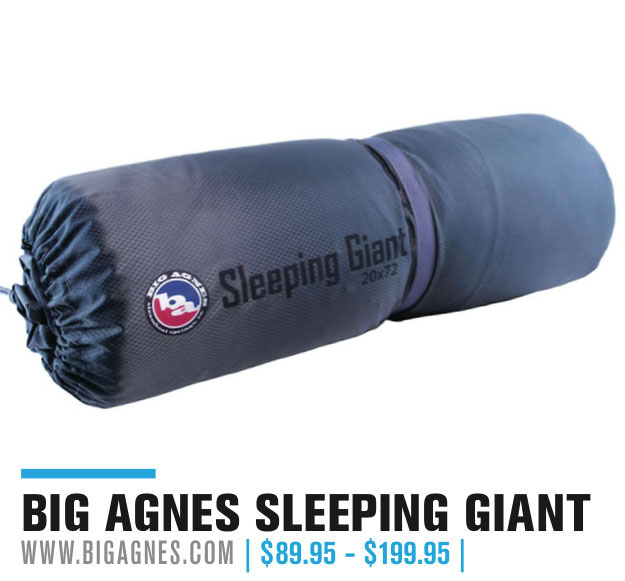 Sleeping under the stars is magical except for one thing: the ground. It’s called terra “firma” because it’s hard, and you don’t have
to be a princess for a pea/pinecone to give you fits all night. Enter the Sleeping Giant. This pad cover slips over any size or type of camping pad,
upgrading it to luxury. The Sleeping Giant’s secret sauce is a layer of “memory foam,” the dense space-age stuff developed by NASA to make air travel
more comfortable. The first night I slept on the Sleeping Giant was the last time I’ll go without it: I zonked right out and didn’t stir until dawn.

I used to pack a superlight alpine tent for car camping. Then one morning I had an awakening. Literally. I asked myself why I crammed
into a nylon coffin when my car didn’t care how much the tent weighed. 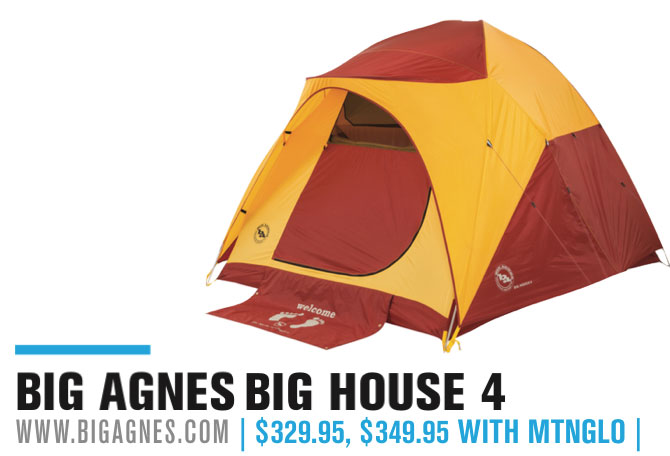 I switched
to the Big House, a spacious abode with room enough for four humanoids, or two with room to roam or scuttle into opposite corners and brood. I’ve used
the tent for over five years now, and have loaned it out for numerous school and family outings. It is always the hit of the trip. Fights have broken
out over who gets to live inside.

With a peak head height of five feet eight inches, the Big House is a tent you can stand in—crawling be gone! The Big House, though large, is easy
and quick to pitch, and a snap to break down and stow in its suitcase-style tote bag (packed weight is right around 10 pounds). Copious netting panels
keep the interior well-ventilated and bright. For folks who like to read or play cards at night, the mtnGLO version has LED interior lighting. My Big
House was the one without the fancy lights, but for $39.95, Big Agnes has a retrofit kit. 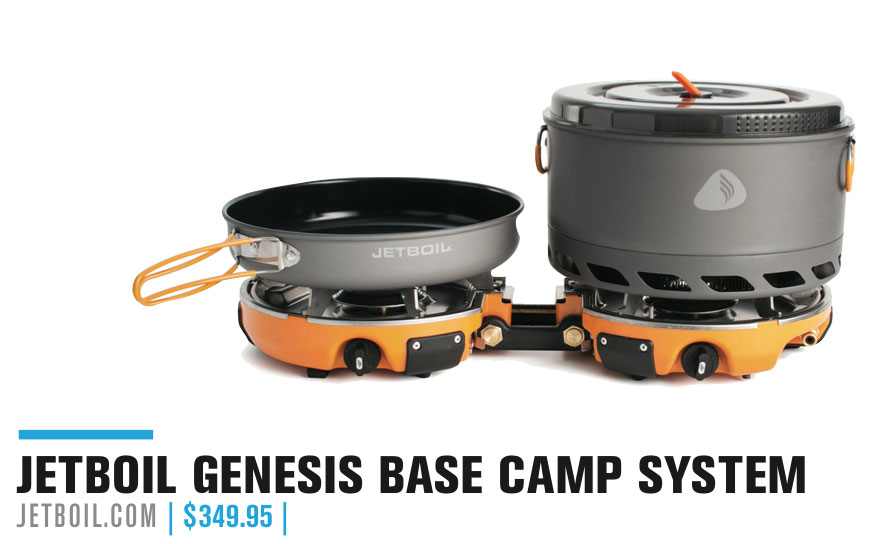 The Genesis, Jetboil’s new dual-burner propane stove, boils a quart of water in about two minutes and can do a gallon in nine and a half.
If that isn’t fast enough, cook over a volcano.

Boiling water, though, while critical for getting that first cup of joe down the hatch, isn’t the only measure of a stove. Equally important, and more
so if you want to really cook—say, you have a hankering for an omelet—is a stove’s ability to simmer. Not a problem. The Genesis has a
micro adjustment that dials the heat all the way down to a flicker. Rock and Ice recently used the Genesis Base Camp System to prepare nourishment
for 35 folks at the annual Photo Camp. It got the thumbs up.

Besides the stove’s impressive power and adjustability, the Genesis system shone by having a five-liter cook pot with a lid and a medium-sized non-stick
skillet, both with handles that stay cool. The pot, with a built-in heat exchanger, dispatches large orders but isn’t too much for two to use. Get
pasta noodles going in the pot on one burner, the sauce in the skillet on the other, and you pop the cork on the Chianti and settle in for a feast.
When you’re ready to move on, the Genesis folds in half and stows inside the pot. 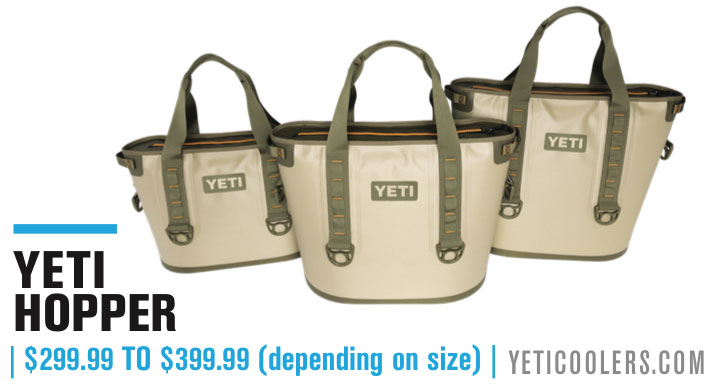 Suds are only good cold. Whether you’re hitting the road for the weekend or living out of your car, keeping your beverages and perishables
chilled is a necessity, and costs be damned!

The Yeti Hopper 20, 30 or 40—the numbers stand for the pounds of ice each can hold—is as close to refrigeration as you can get without a refrigerator.
These soft-sided coolers are made from the same material as whitewater rafts, are leak- and puncture-proof, and have an anti-microbial liner to keep
funkies at bay.

The 1.5-inch-thick closed-cell foam insulation keeps ice frozen for days, and if it melts, Yeti’s “HydroLok” zipper, designed after the zippers on Hazmat
suits, are watertight. You can toss the cooler in the car without danger of cooler juice leaving its mark. 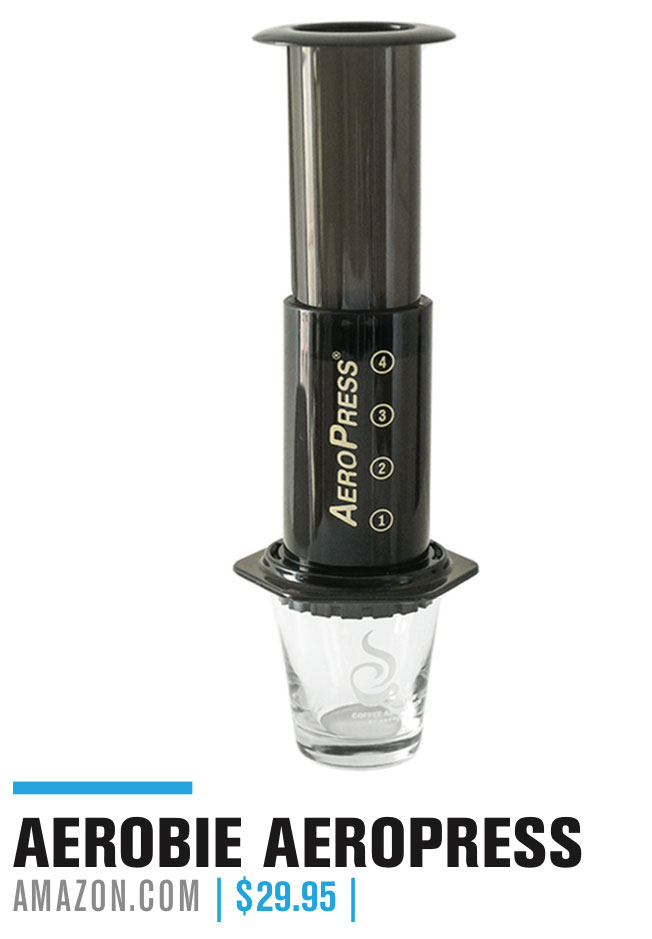 A yawn is a silent scream for coffee. With the AeroPress, your mouth will only gape in awe. This hummer wasn’t designed for camping—Alan
Adler, its inventor, simply wanted to make the best-tasting coffee in the world—but it just happens to be small enough to take on the road.

It works the same way as a French press, with total-immersion brewing and a plunger to create pressure. But unlike the filter on a French press, the one
on the AeroPress is at the bottom, not the top. This placement prevents clogging and makes the unit much easier to clean. The press also comes with
paper micro-filters that remove the finest of grit to produce clear, black gold. An added benefit is that the AeroPress can make both espresso and
American-style coffee, duality a French press lacks.

As for the flavor? Some swear the AeroPress makes the best coffee on the planet. I’m no coffee connoisseur, but it tastes pretty darn good to me. Brew
one up for an all-night push through the sparse climbing territory of the Midwest and be sending by morning, or get your caffeine fix before a day
at the crag. No more watery instant coffee or gas-station garbage. The AeroPress allows you to make high-quality sending sauce just like at home. 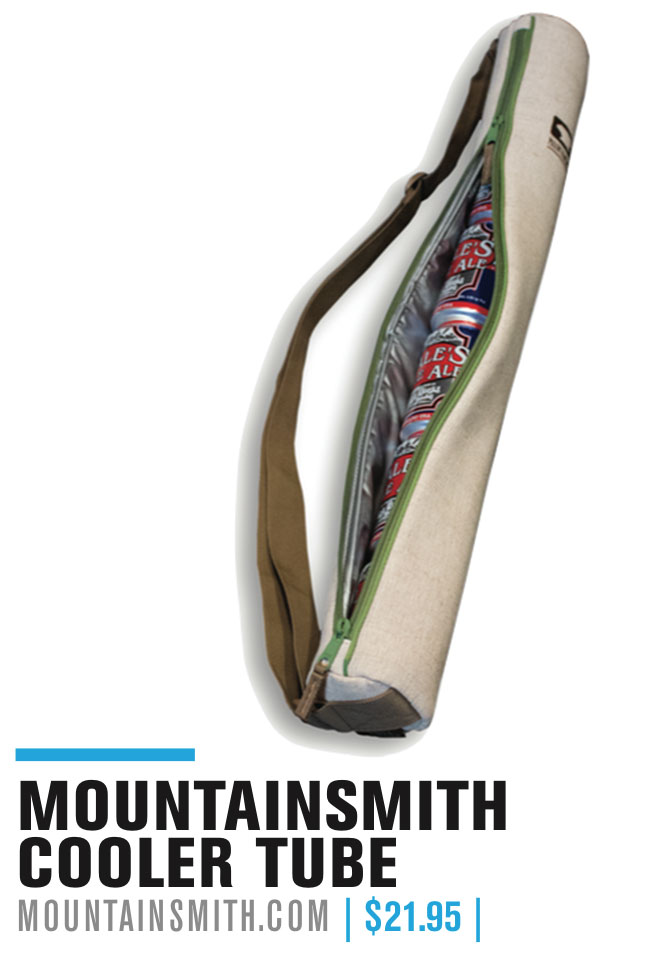 “If you hauled beer up this rock, you’re insane!” Jonathan Hemlock, a.k.a. Clint Eastwood, said when Ben Bowman offered him a drink in The Eiger Sanction.

Climbing and après-climbing beverages go together like, well, beers in a beer tube.

The Mountainsmith Cooler Tube is exactly what it sounds like—an insulated tube with a shoulder strap, designed to carry a wizard- staff of cans.
It can hold a sixer or, if you are bouldering in a tropical paradise such as Virgin Gorda, two bottles of Cruzan rum.

Best part? The Cooler Tube fits into a crash pad (also good for extra insulation). If you’re not bouldering, throw the sling over your shoulder and carry
it to the crag or … even the top of a desert tower.

This article originally appeared in Rock and Ice issue 236 (August 2016).