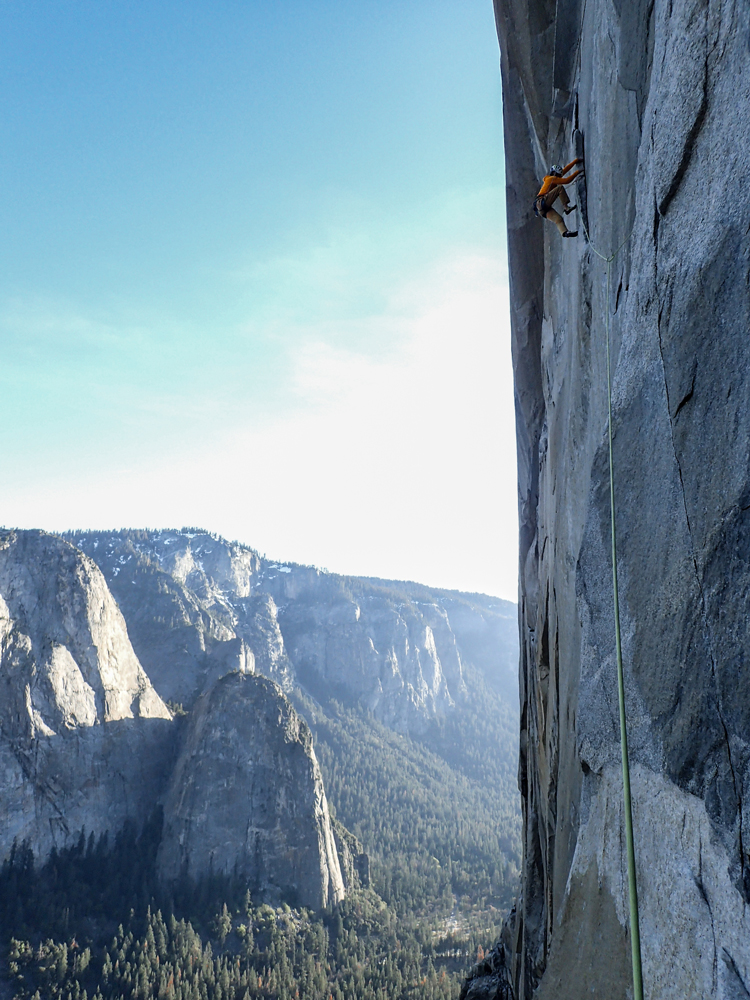 the Huber brothers Thomas and Alex’s first free ascent earlier that year. Like the Huber brothers, Hammond and Houlding spent three
days on the wall. They onsighted or flashed all but two pitches—pitch three (5.13b) and pitch five (5.13c), the crux. Between them, they only
took two falls on the entire 30-pitch route. It was also Houlding’s first trip to Yosemite.

Phillips thought El Niño would be a nice introduction to Yosemite climbing. Cook, who already had four Yosemite trips under his belt, “…was
‘my guide,’ as such,” Phillips joked. “So we went straight for it.”

The physical crux comes early, three pitches of 5.13—13b, 13a and 13c—after two easier pitches. They redpointed the pitches—and both
took massive whippers in the process, Cook’s was featured as a Weekend Whipper—and
despite feeling “pretty wrecked,” the next morning they pushed upwards to pitch 11.

But then bad weather settled in the Valley. They were moving too slowly, not working well as a team. Phillips admits that his inexperience with Yosemite-style
climbing was holding them back. So they bailed. They left a stash of gear at the top of pitch 11 for another attempt once the weather passed and returned
to the valley floor to reorganize.

“The weather remained pretty bad,” Phillips says, “so we climbed other routes.” He used the time to get in as many miles of climbing as possible, “…getting
spanked on 5.10s, 5.11s at first,” he says, before he started onsighting 5.12s such as Separate Reality, and the classic 5.13a crack The Phoenix,
on toprope. 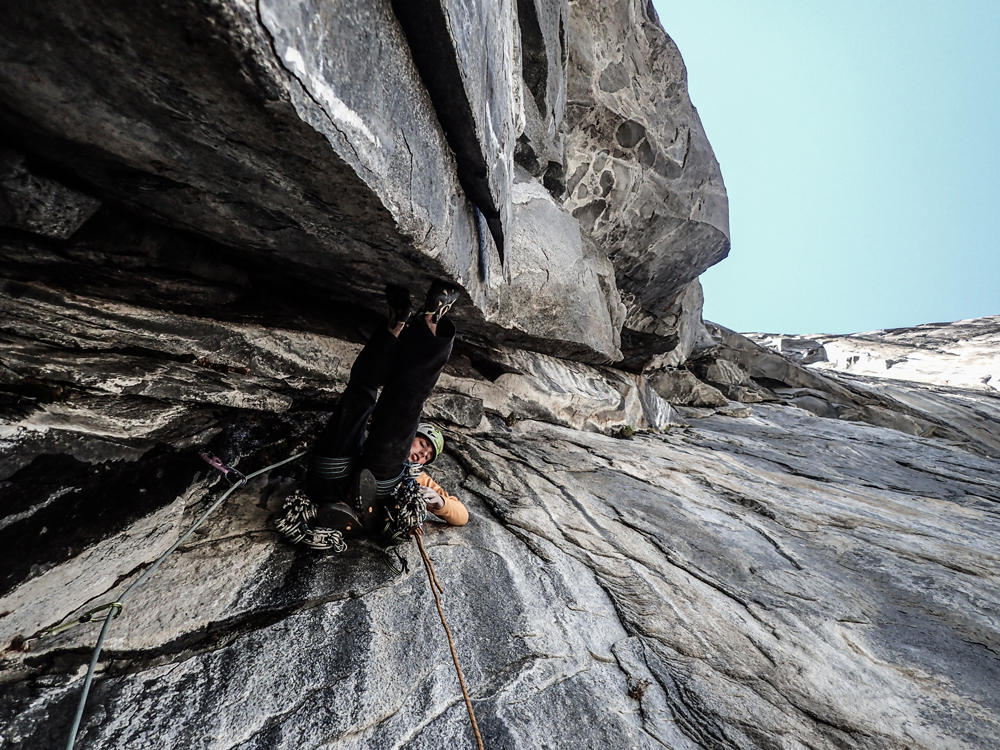 Phillips and Cook re-led all pitches to their previous highpoint of pitch 11 and bivied. They swung leads, playing to their strengths, but both climbers
freed all pitches either on lead or second.

“I’ve found that in Yosemite, 5.11s and 5.12s tend to be cracks and corners, specific features, whereas 5.13s and above tend to be face climbs that are
very crimpy and technical,” Phillips says. “I actually thought that the 5.13s felt easier than the easier grades since I’m more used to that style.
Jacob took all the weird pitches.

“We kept on managing every pitch as they came along.”

They planned to be on the wall for six days, and other than the first two nights, they hung their portaledge in a new location every night. “No mental
portaledge parties this time,” says Phillips, but like true Brits, “We drank a lot of tea. But then one day it was gone!

“Our bag full of tea bags must have fallen. It was really depressing. We had to drink Clif bars in hot water in the mornings. It was pretty awful.”

Nevertheless, tea-less but a little lighter, they knocked down pitch after pitch. On day five, they reached the final 5.13-pitch, which is notorious for
always being wet and has shut down many climbing parties. It was wet.

Cook, out of sight from the belay, peeled off and returned to the ledge. He thought that the pitch might be impossible in its condition. Phillips, however—who
has a knack for sticking to wet holds, like on his and Willis Morris’ ascent of Paciencia (8a/5.13b) on the Eiger North Face last fall—was gunning to give it a go.

He went out and, using some of Cook’s beta, pushed the line higher. They discovered a way that avoided the wet holds with one hand, while still using the
soaked holds with the other. “But at least only half the holds were wet,” he says. “It was a team effort.” They had one day of food left and decided
to bivy for the night so they could start fresh in the morning.

“The difficulty with El Niño is its sustained nature—and Jacob agrees,” Phillips says. “There was no pitch that didn’t have some sort of
difficulty to it even if it was a low grade. They were either bold, technical or physical and occasionally all three. 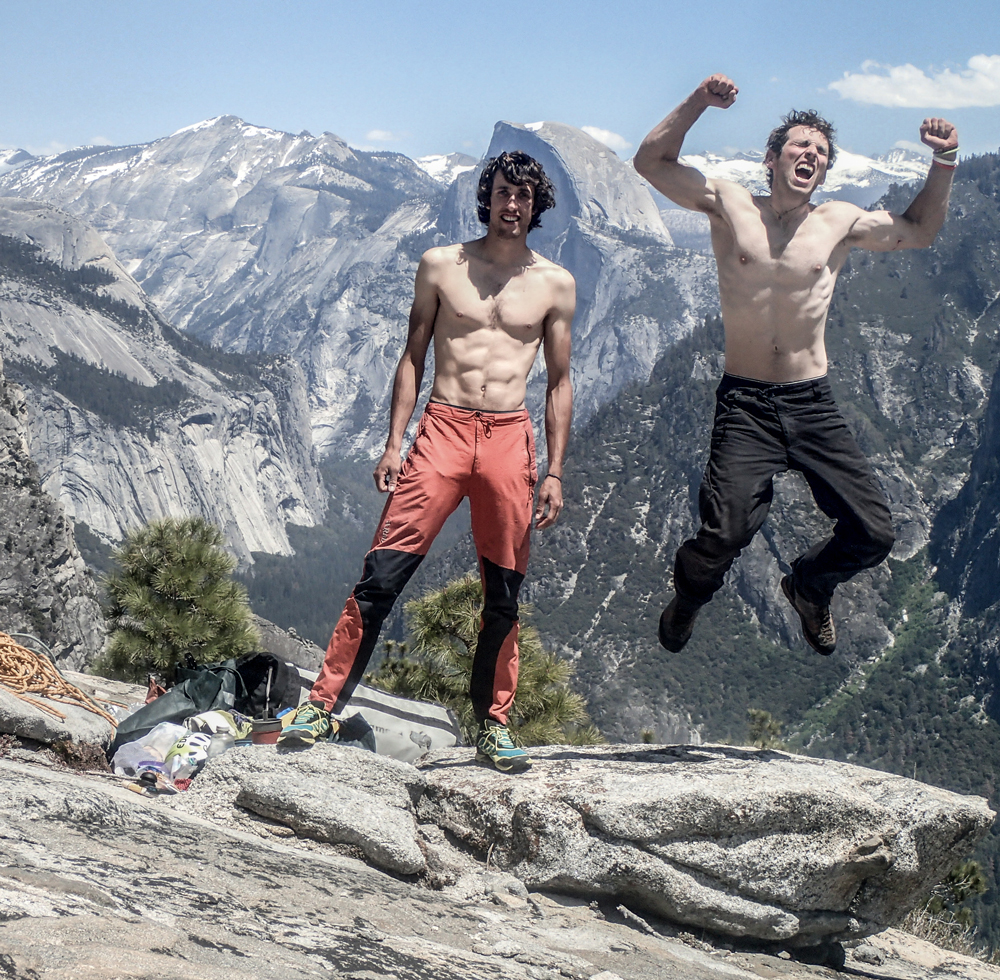 “The 5.13c pitch was physically the hardest but the crux of the whole route was that it’s just a lot
of pitches that you basically can’t fall off of because it would be a huge waste of energy and time. You basically have to climb consistently at 5.12+
onsight.”

Phillips and Cook did fall on a couple 5.13 pitches, like the wet 5.13a. Fortunately though, on their last day, they both sent the wet 13a second go. “We
somehow managed to get through it,” Phillips says, “and kept blasting up to the top.” They reached the summit on Saturday, May 14.

“Topping out El Niño was definitely the best moment of the climb. There were so many moments that we were unsure if we were going to do it. And
it felt epic not to be on portaledge anymore.

“The night we spent above the Black Roof was the most exposed position I’ve ever slept in. Actually, I think that’s where I dropped the tea.”

Weekend Whipper: Back Slapper Off Bold (and Extremely Slabby!) Route

*El Niño goes 99 percent free with one 25-foot rappel, as per style of the the first ascentionists Alex and Thomas Huber.