Nick Carpenter joined the United States Navy at 19 to pay for college. His first deployment was to the Western Pacific as a Fire Control Technician on the USS Topeka, SSN 754—a submarine. Carpenter was in charge of the weapons systems, SONAR tracking and the ship’s safety.

After two years of submarine life, Carpenter was cross-rated to the highly sought after field of cryptology and intelligence. He began working as a Cryptologic Technician in Washington, D.C. with the Intelligence Community (known as “The IC”).

His last deployment—the one that gave him the most “trouble”—came in 2011. Carpenter worked with Special Forces in Afghanistan in support of Operation Enduring Freedom. 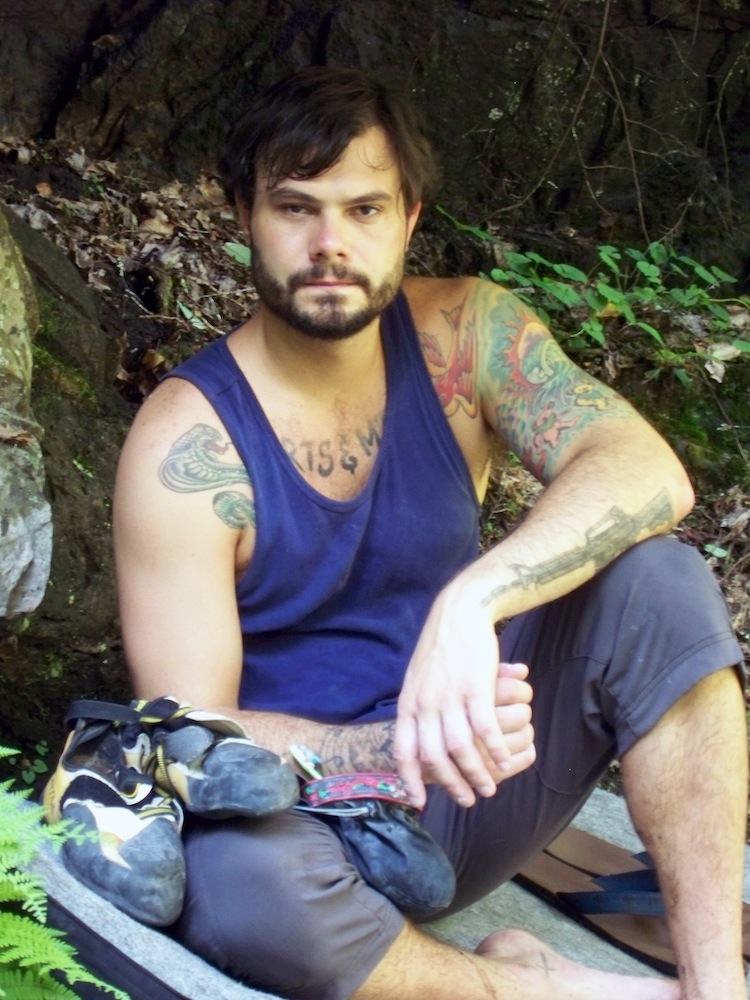 It all changed when I returned home. I planned the deployment to coincide with my EOAS (End of Active Service). I had a good contract lined up to keep doing what I was doing, just with exponentially better pay. Life had other plans.

After returning from Afghanistan, I started going through what would be a two-year divorce. I left the IC, moved back down to Chattanooga, and barely kept my sanity. “PTSD” as they call it.

In a little over a year, I lost two close friends to suicide, watched helplessly as my five-month-old nephew took his last breath, and buried my Granny.

My friend, Justin Norcia, pushed me to climb. Even on days I didn’t want to leave the house, he would show up anyways, and by the end of the day, I always felt better. Rock climbing became my sanctuary.

I have a very active mind. It’s a blessing and a curse. It served me well in the military, but in the civilian world, people see me as being paranoid. At all times, I am very aware of my surroundings.

When I climb, though, everything goes quiet. It’s focusing on the next crimp or sloper. It’s figuring out where to place a heel hook or knee bar. There’s no time to think about anything thing else, just climbing. It truly is the only time that I feel at peace.

I was raised in the boulder fields and crags of Chattanooga, Tennessee and started climbing when I was 14 years old. It was a tough transition going to a submarine, but I made due by doing a lot of pull-ups wherever I managed to find a spot—usually in the torpedo room or on a random pipe.

I tried to climb as much as possible while I was in port, but I just didn’t have the time. Sometimes I could get to Joshua Tree or the Santee Boulders. For the most part, though, climbing went on the back-burner during that time.

My last deployment came in 2011. This is the one that gave me the most trouble. There is not a lot I can say about it, honestly. I worked with some of America’s top Special Forces in Afghanistan, in support of Operation Enduring Freedom.

We were based out of Jalalabad in the Nangarhar Province and ran operations in Northeast Afghanistan in an area near the Pakistan border. We did “God’s work” there. I was young, but I had a lot of guys’ lives in my hands.

In July of that year, I made a decision that resulted in the death of one of ours. I felt the weight.

I’m tired of burying my friends. I have looked up from the bottom and climbed my way out of the depths of despair. We all have our peaks we must concur in life.

Climbing has saved me from a downward spiral that would have resulted in me taking my own life or drinking myself to death. I’m thankful I have friends, like Justin Norcia, that recognized where my life was going. He knew that climbing is where my heart is and will always be.

Nick Carpenter lives in Chattanooga, Tennessee with his girlfriend Sarah and Blue Heeler, Mountain Girl. He is finishing a degree in business marketing at the University of Tennessee.

If you have a question, comment, or want to share your own story with Nick Carpenter, he invites anyone to contact him by email at carpenterns@bellsouth.net.