An international team comprised of Ines Papert (Germany),
Joseph Pfnür (Germany), Luka Lindič (Slovenia) and Paul McSorley (Canada) has established a 520-meter trad route in the Du Toits Kloof Mountains of South Africa—ground up and without the use of bolts.

“The climb was really outrageous,” McSorley writes Rock and Ice. “Quartzite lends itself to really athletic but flow-y movements. The wall is
quite intimidating because it is so overhanging so it felt quite engaging. Overall, the rock quality was excellent.”

The four climbers began their trip to the Slanghoek region of South Africa with a repeat of A Private Universe (ED1 A1 7a/5.11d 550 meters), previously
the only established route in the quartzite amphitheater. Dave Cheesmond called it “one of the last great problems” of South African climbing before
a team of South Africa climbers, Hilton Davies, David Davies and Mathew Sim, completed the route in 2002. They placed around 100 bolts for anchors and protection. Dave Birkett of the U.K. and Tinie Verseveld of South Africa later freed A Private Universe at 7b+ (5.12c).

With A Private Universe checked off, Papert, Pfnür, Lindič and McSorley turned their efforts to an unclimbed line up an “obvious corner system”
on the right side of the wall.

“Ground-up style seemed the only logical way to attack such a steep cliff, since top down rarely delivers a ‘natural’ rhythmic climb on such a big feature,”
McSorley writes. “Our motivation was to open a quality, repeatable route that would still have a high adventure factor.” They were prepared to use
bolts, if necessary, McSorley writes, “but after the first recon, we realized that it could be climbed naturally so we left the drill behind. In a way, that was the challenge: find a line that is direct, but didn’t need bolts.”

In a way, that was the challenge: find a line that is direct, but didn’t need bolts.

They tackled the climb as two teams of two, Parpert with Lindič and Pfnür with McSorley, and each day one team pushed the line higher. They set a blistering pace, onsighting the first nine pitches and coming to within a hundred meters of the top, before the storm of the century hit, “smashing mature timber like toothpicks, depositing snow in the mountains and causing widespread flooding throughout the Western Cape of South Africa,” McSorley describes. Their timing couldn’t have been better, though, since they had descended from their initial push just before the storm struck. The climbers escaped inland to Rocklands and Montague to wait out the storm.

Upon returning, on June 15, the four climbers along with photographer Franz Walter, re-climbed familiar ground to a bivy ledge on top of pitch 9. “The first two (low angle) pitches were a bit scruffy but after that, every pitch was good!” McSorley writes. “There was one definite crux pitch, which was a steep changing corners pitch. At least three other pitches were quite stiff.” They climbed as two separate teams, but shared the work of hauling and anchor building for efficiency.

After spending the night on the bivy ledge, they pushed for the summit the following day. “The most memorable [pitch] for me was pitch ten, a devious 11+ that took me a while to psyche up for and send,” McSorley writes. “When I finally topped out on the belay ledge, my reward was getting attacked by biting ants.”

That day, they completed the climb and Ruby Supernova was born. “The name is a bit of an offshoot of the original route on the cliff, A Private Universe,” McSorley writes. “We used ‘Ruby’ because of the color and gemlike quality of the stone and ‘Supernova’ because there is something pretty cosmic about this amphitheater—it’s hard to appreciate without spending a night up on the bivy ledge.”

“Definitely, this wall has more potential,” McSorley continues. “There are a few lines I’d consider going back for, but I think my next trip to South Africa will involve visiting other areas.

“This country has so much more than just the Rocklands, Waterfall Boven and Table Mountain.” 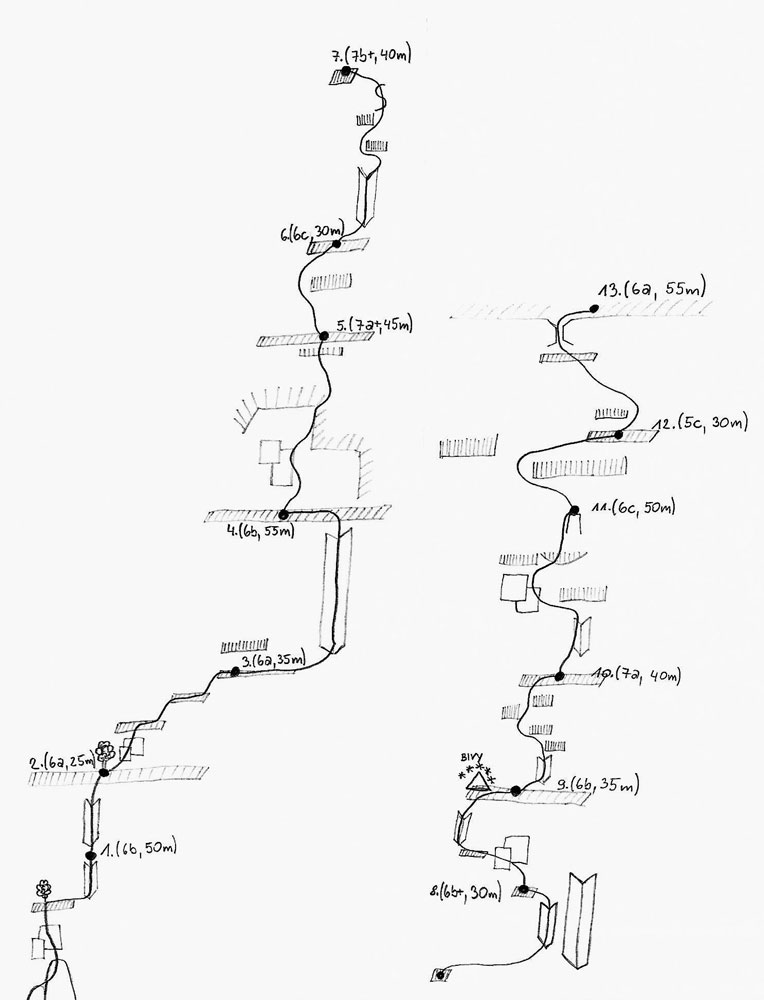 Sasha DiGiulian Cranks the First Ascent of a 5.14c in South Africa