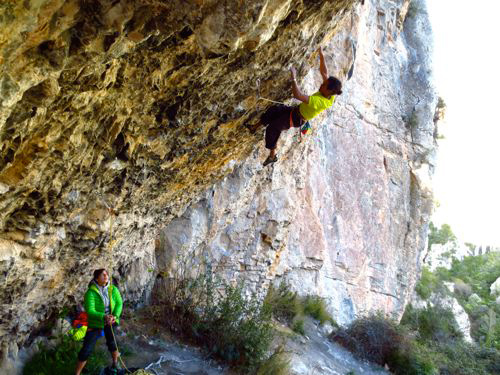 The Swedish climber Said Belhaj surprised himself with a second-try send of Supernova (5.14d) at Vadiello, Spain. Belhaj reports that the send was totally unexpected, writing on his blog: “On my first red-point, with no expectations, I just wanted to feel how that upper section would feel, probably arriving there pumped like hell. I just went for it, climbed every section perfectly (even better than when working the moves individually which has never happend before) and finally found myself on top of the route.”

Belhaj claims that his fitness was “terrible” prior to climbing Supernova, so as a result he had planned to spend three weeks trying the route. But he believes his low expectations contributed to his performance. He writes: “This was for the me a new step in red-pointing, climbing so perfectly was defenately the key to succes. No expectations another.”

Said Belhaj is a globe-trotting professional climber and musician from Gothenburg, Sweden. He is an exceptional onsight climber and his music has been described as having an “afromoroccan traditional/spiritual style.” For more on Belhaj check out the video below following his climbing and musical adventures in Morocco.