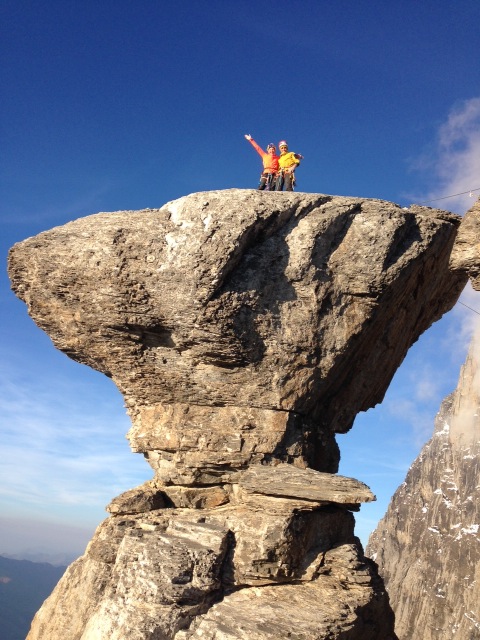 In a rare moment of sunshine, Sasha DiGiulian and Carlo Traversi topped out the iconic mushroom feature of Magic Mushroom (7c+ 5.13a) on the North Face of the Eiger, Switzerland. DiGiulian and Traversi are the first Americans, and DiGiulian the first female, to free climb the route.

“This has been a long journey, made longer by Mother Nature, and we have had to stay strong, positive and open minded,” says DiGiulian.

DiGiulian, 22, and Traversi, 27, have been attempting to climb the Eiger’s North Face for weeks. Their original goal was to free climb La Paciencia (5.13b)—the most difficult rock route on the North Face of the Eiger. They dubbed the project Eiger Dreams, in reference to the Krakauer book.

But after weeks of terrible weather and multiple attempts, the team set their sights on 20-pitch Magic Mushroom instead, also on the Eiger’s North Face. Magic Mushroom appeared to be less affected by the recent storms and winter-like conditions.

Roger Schäli and Christoph Hainz opened Magic Mushroom in September of 2007, but it was Stephan Siegrist and Ralf Weber who completed the first free ascent in June 2009. Schäli returned to the route and on August 17, 2011, he claimed its first one-day free ascent.

On August 26, DiGiulian and Traversi scrambled the west flank of the Eiger to the summit and bivied. They rapped the face the next morning to suss out conditions. It looked dry enough to climb and they began their ascent as soon as they reached the base.

Three days later, on August 29, DiGiulian and Traversi stood on top of the route’s namesake—the balancing mushroom. “Free climbing on the Eiger, and standing atop one of the most recognized routes on this iconic peak is an incredible feeling,” says DiGiulian, “and one I am grateful to have achieved.

“Carlo was the perfect partner. I could not have done this without him and his optimistic outlook and steady reinforcement.”