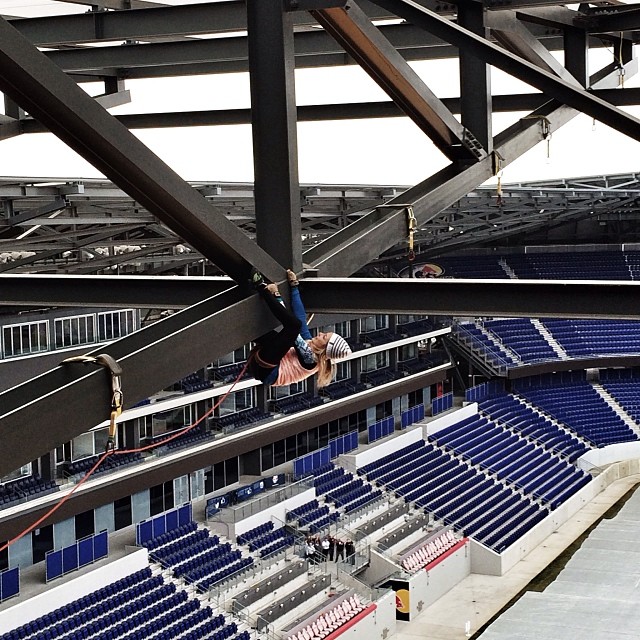 On March 17, Sasha DiGiuilian captivated a 25,000 seat stadium as she hung from the rafters and waved to the crowd from the top of the Red Bull Arena in Harrison, New Jersey.

Though for the past three years DiGiulian has made waves throughout the climbing world with notable achievements such as becoming the first American woman to climb 5.14d, or the first woman to send Bellavista (5.14b)—Alex Huber’s alpine multipitch in the Italian Dolomites—she has now made headlines again by climbing the roof of a stadium for spectators at the opening soccer game of the season.

But DiGiulian’s experience climbing in arenas began at an early age. In an interview with Three Strings Media after Sasha’s first female ascent of Pure Imagination (5.14d), her mother, Andrea DiGiulian, said, “Sasha always climbed. She climbed everything.” She went on to say with a smile, “The joke was, when I would say, where is Sasha, they would say, ‘Look up!’” Sasha recently wrote on her blog that she could be found scaling the rafters while her brother, Charlie, played ice hockey.

Rock and Ice contacted DiGiulian to find out the back-story behind climbing the Red Bull Arena. When asked what inspired climb, she said casually, “I was with my friend at a soccer game at the arena and were trying to think what would be like to climb in the stadium.” Looking up, she found that the scaffolding was the prime choice with its big holds.

With Red Bull and Petzl’s support, DiGiulian used heavy webbing and quickdraws to make this spontaneous idea a reality. The route ran along the roof’s support beams, over 100 feet above the arena. Right before the start of game between the Red Bulls (Red Bull’s soccer team) and the Colorado Rapids, DiGiulian climbed out to the jumbotron and retrieved the game ball.

Concerning the actual climbing DiGiulian says, “It was pretty easy climbing except that you were upside down for eleven minutes repeating the same motion.”

When asked how she prepared mentally for this performance and if she was nervous, DiGiulian replied confidentially, saying that she was “purely excited.”

She went on the explain: “It was a fun event for me because it was a fresh avenue of climbing. I pour my energy into training for competitions and am always competing against myself.” DiGiulian commented that the event was a welcomed change of pace.

When asked what kind of effect she thought her performance had on the audience, DiGiulian replied:

“I bet some people could relate when I was climbing. Others were just astonished and I bet a lot just thought it was cool I was up there climbing.”

While interviewing DiGiulian by phone this past Friday, her voice faded in and out due to the yells of a crowd in the background. DiGiulian had taken the time to talk while competing in the Open Sport Climbing Series Nationals in Santa Ana, California. She placed second behind Delaney Miller, and again put on a show for the audience by down climbing from the top of the finals route to clip a bolt she missed, and then climbing back to the top to clip the chains.
Check out this video of DiGiulian’s Stadium ascent.