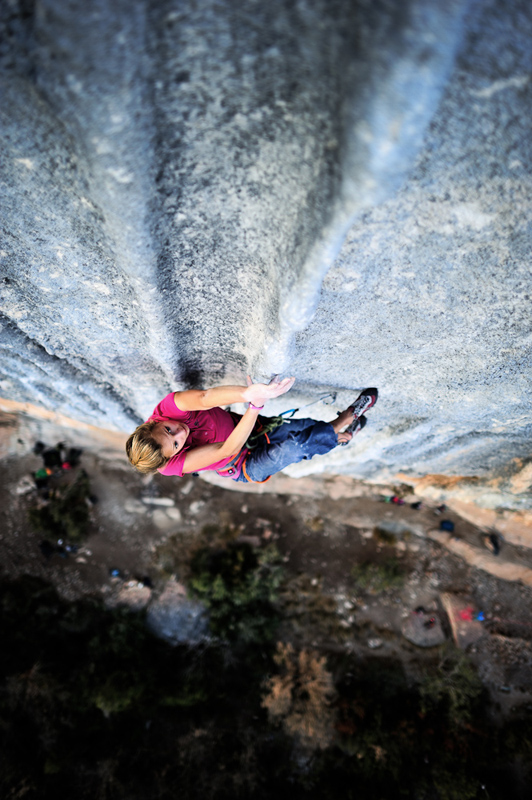 Keith Ladzinski ” />Sasha DiGiulian is back at it again sending some of the hardest sport routes in the world. On Friday, March 22, DiGiulian climbed Fish Eye and Los Humildes pa Casa during one day at Oliana, Spain. Both are 5.14b.

DiGiulian spent five days in Oliana climbing. She climbed for two days, took a rest day, climbed one more day, and then came back and sent.

Fish Eye is a 180-foot long endurance climb with a technical slab section at the end. The route was first bolted by Chris Sharma in 2009.

“I fell after 50 meters of climbing at the last bolt of this climb. It gets to you!” DiGiulian told Rock and Ice. “Sending Fish Eye kind of felt like an afterthought a little bit becausethe time before that I thought that I would for sure send yet I felloff at the last clip.”

Just after climbing Fish Eye, DiGiulian got on Los Humildes pa Casa, a 180-foot route that follows a gigantic tufa to the top. At one point, the tufa splits into two separate tufas and climbers have to keep stemming up to reach the finish. “My legs grew exhausted from stemming and smearing so much,” DiGiulian said.

“Clipping the chains to Humildes pa Casa felt incredible. I had just tried the route before putting up draws and my heart was literally in my throat then because the climb is so intimidating,” DiGiulian said. “I only had five days total in Spain so while climbing new projects I needed to make quick work of figuring out beta and sequences to fire. However, sending this route was so totally unexpected and reaching the top I was like ‘Wait, No Way?!'”

DiGiulian has been balancing her climbing career with life as a full-time university student–she is just finishing up her first year at Columbia University. “Columbia is very rigorous and academically demanding. Yet, when I was injured and unable to climb for two months I really realized how much it mattered to me to find the balance and to integrate climbing back into my life when I could. I missed it. When you don’t have something that you are so used to having for granted, you really can realize the true significance that that passion has on your life.”

DiGiulian has been climbing since she was 7 years old and started climbing 5.13 by the time she was 11. She has previously climbed Era Vella, a 5.14d route in Spain, as well as numerous 5.14c and 5.14b routes.

Check out video below of her sending Era Vella: