Roger Schaeli (Switzerland), Robert Jasper (Germany), and Simon Gietl (Italy), have established what is now the hardest route on the North Face of the Eiger—Odyssee (8a+/5.13c).

“After we were able to concentrate on Odyssee 100-percent, we were able to put the single pieces of the puzzle together and finally the moment came: Yes, we did it!” Schaeli writes on his blog. “To me, Odyssee is obviously a personal milestone.”

Odyssee ascends a swath of limestone parallel to Paciencia (5.13b), the route coveted by the DiGiulian/Traversi and Phillips/Morris parties in August. The two routes share a bivy ledge before Odyssee’s tenth pitch.

Pitch ten, the crux of Odyssee, cranks 25 meters through one of the Eiger’s steepest sections with a stout boulder problem lurking beneath the anchor. “It took 17 attempts until I was able to redpoint the pitch,” Schaeli writes. “I can’t remember having to climb such a hard single move with so much air between myself and the last bolt… To me it’s an 8a+ [5.13c].”

At 5.13c, Odyssee dethrones Paciencia as the most difficult route on the Eiger.

The crew wrestled with the Eiger’s tempermental weather for nearly three weeks, forced into a cycle of ascending and rappelling fixed ropes. The party climbed and bolted in sync with brief weather windows, retreating to seeping bivy ledges as the summer storms rolled in. Gietl, who joined Jasper and Schaeli intermittently throughout their attempt, left to visit his wife and newborn child during poor conditions.

Schaeli acknowledges the route’s wetness as a necessary evil. “Our route had to run through the biggest and obviously grey, very overhanging streak of water. This is where the neighbouring routes Paciencia and La Vida es Silbar [5.12d] arch to the left and right and follow far less steep terrain.” As rain and snowmelt trickle from the summit, calcite dissolved by the precipitation is deposited on the Eiger’s face to form climbable limestone features.

The “Dream Team,” as Schaeli calls them, climbed the route team redpoint-style, meaning at least one of the three climbers led each individual pitch.

“We agreed that everyone had to face their own music, meaning that whoever bolted the pitch had to lead it,” Schaeli writes.

The team protected the climb with a mix of cams, hooks and bolts, a method that Schaeli christens, “Smart bolt: Place as few bolts as possible in the right places… We really only used bolts where we had no other possibilities.” Ethic in mind, they nicknamed their drill “Judas.”

Schaeli topped out Odyssee’s final pitch, an airy 5.11b, as the sky darkened and fog obscured the twinkle of Grindelwald below. “It took endlessly long and it often seemed impossible… Eiger live!”

But a nagging dream still squirmed in the back of Schaeli’s mind: “After I was able to first ascend Odyssee and repeat La Vida es Silbar in 2003 I was missing Paciencia to complete my Tschechenpfeiler trilogy.”

Read more about the climbers and their recent expeditions on their blogs: 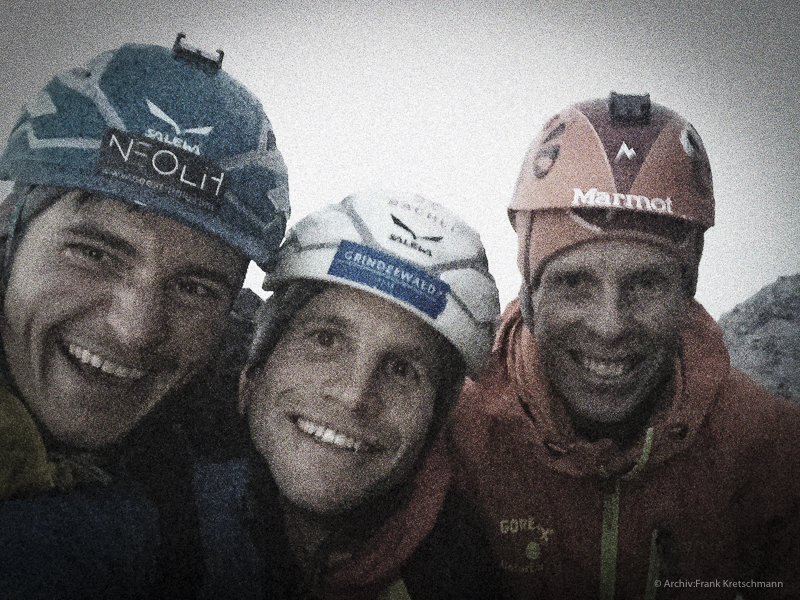 Correction: A previous version of this article incorrectly stated that Paciencia and Odyssee share the first nine pitches. They do not. Robert Jasper, thank you for the correction.