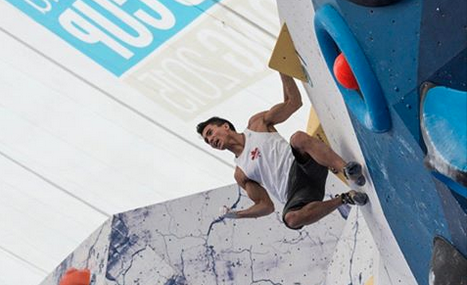 “The problems of this World Cup were not super hard compared to previous competitions,” Noguchi wrote on Facebook. “But that meant they were challenging our flash ability more. This really challenged our mentality till the very last problem at finals.”

“I’m really glad to have more than one [bouldering] win because someone can always say the first was a fluke,” McColl told Rock and Ice. “With a second win, you’re proving to yourself that it wasn’t a fluke.”

Only two Americans attended, with Nathaniel Coleman making Semi-Finals to place 18th and Sierra Blair-Coyle placing 21st, one place out of Semi-Finals.

Qixin Zhong of China and Mariia Krasavina of Russia won the men’s and women’s speed competitions, also held in China this past weekend.

The fifth IFSC World Cup competition will be held on June 26 and 27 in Haiyang, China, and will include men’s and women’s bouldering and speed climbing.