Sean McColl took first place at the Adidas Rockstars invitational bouldering competition in Stuttgart, Germany, narrowly beating out Jongwon Chon of Korea in a head-to-head race in the final round.

McColl and Chon climbed identical problems set side by side on a stage in front of an audience of 3,500. McColl slipped on the top-out, barely hitting the buzzer before Chon and winning the 20,000 euro prize.

“It was a crazy finals, filled with minor mistakes and trips everywhere,” McColl posted on Facebook. “In the end I beat Jongwon Chon to the buzzer faster than Stage 4 of American Ninja Warrior,” referring to his performance last week on the popular television show.

“Hold your breath for the buzzer beater,” posted McColl on his Facebook, “and know that I laughed time and time again watching the replay.” 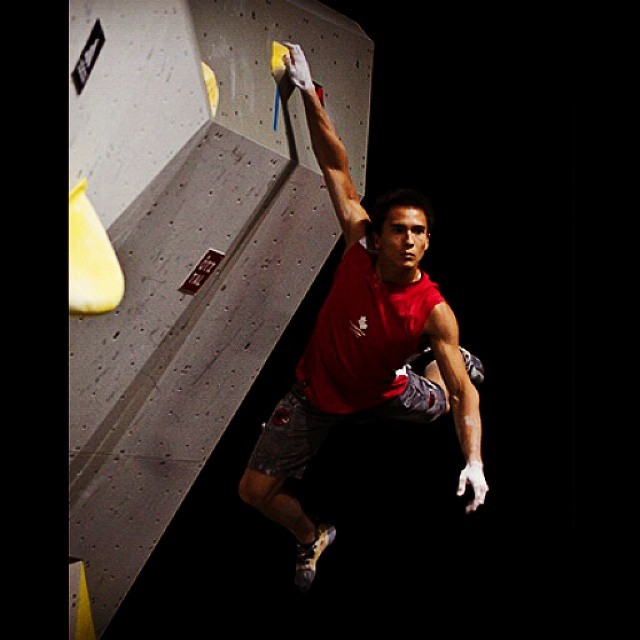 The Adidas Rockstars competition is held in the same manner as other IFSC bouldering events until the finals. The best six climbers from the initial rounds qualify for finals, where they climb two problems in a knockout format. The top three attempt a third problem to decide who moves on to the “superfinal,” where the last two competitors climb concurrently to send a matching problem in the fastest time.

The event attracts both climbing fans and music lovers. A live rock band plays while the athletes climb, providing “the intoxicating musical setting for outstanding sports performances on artificial rock,” according to the event’s website.

In addition to the 3,500 spectators, 33,000 tuned in to the live stream, and individuals from 45 countries followed the competition on Facebook.