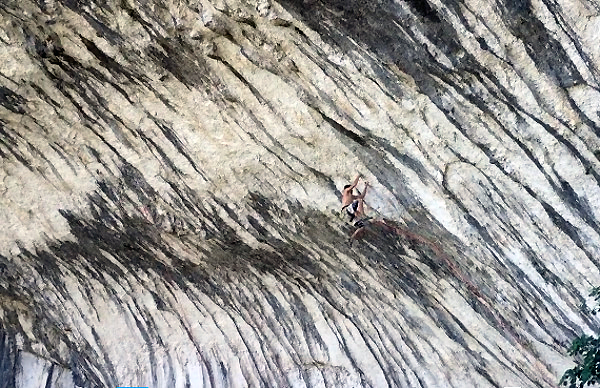 France’s Seb Bouin has taken the transnational send train from Norway to the Verdon Gorge for a first ascent of A Muerte Bilou. Bouin proposes 9a (5.14d).

A Muerte Bilou ascends 150 feet of 60-degree overhanging limestone through the steepest section of Verdon’s Ramirole cave. Antonin Rhodes, who bolted the route, is responsible for opening many of the cave’s hardest lines. According to 8a.nu, Ramirole hosts at least eight routes clocking in at 8b+/5.14a and harder.

Bouin just returned from a trip to Norway, where he had his sights set on Flatanger Cave’s Thor’s Hammer (9a+/5.15a). Projecting the route before Alex Megos and Jakob Schubert, Bouin had to leave before he was able to redpoint Adam Ondra’s opus.

This first ascent marks another accolade for Bouin to chalk up on his summer list. Just six weeks ago, Bouin secured the first ascent of Kmira (9a+/5.15a) at Pic St. Loup, France. Bouin also became the second Frenchman to climb 9b/5.15b with an ascent of Spain’s Chilam Bilam in May.