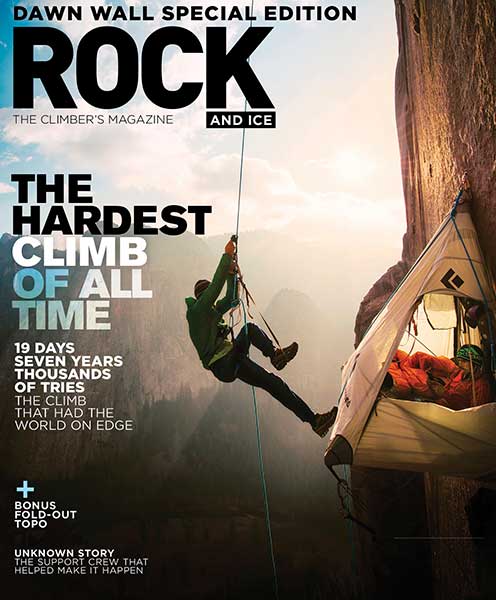 We are proud to announce that the Dawn Wall Special Issue has been completed and will be available to subscribers in less than 16 days.

Last night, the Rock and Ice Editorial staff celebrated the completion of what we believe to be our greatest issue of all time. The reason we are so psyched is because of the remarkable content that poured in from the best climbing writers and photographers in the game.

For starters, a beautiful photo essay by Corey Rich, Brett Lowell and others will cover 23 pages of the issue, complete with caption-contributions from Kevin Jorgeson and Tommy Caldwell.

Rock and Ice Editor at Large, Andrew Bisharat, focused his column on the evolution of big-wall free climbing and gives readers poignant information on the style in which the Dawn Wall was climbed.

“Kevin sounds leery and doubtful, ” writes Long.” He ‘s got a fine girl, a new house, three squares a day.”

Paul Piana – who partnered with Todd Skinner on the first free ascent of El Cap – reflects on the difference between their ascent of the Salathe in 1988 and the world’s reaction to the completion of the Dawn Wall. 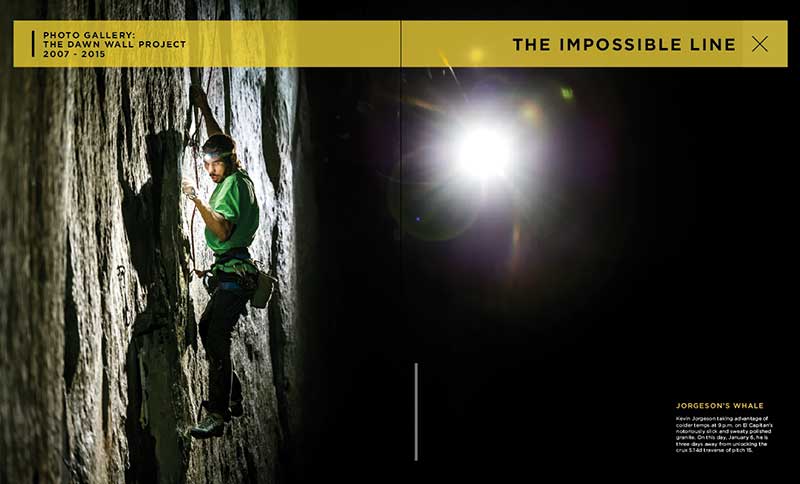 An essay from the Dawn Wall’s first ascentionist – the El Cap rebel Warren Harding – is included for an historical perspective on the advancement of our sport.

A candid, behind the scenes account of the final, 19-day push on the Dawn Wall was penned by James Lucas. Lucas was involved in the day-to-day inner-workings of the Dawn Wall support team, which made it possible for Caldwell and Jorgeson to withstand the rigors of three weeks on the side of El Cap.

Also included is a one-of-a-kind fold-out topo of the Dawn Wall, drawn by Jorgeson and Caldwell, with the exact details of the climb, such as who led each pitch.

If you would like to receive an early copy of the one-of-a-kind Dawn Wall Special Issue, SUBSCRIBE TODAY.