Much has been written and broadcast by Western pundits about the recent tragedy on Mount Everest where 16 Sherpa died in an icefall above basecamp while preparing the route for their guided clients.

We’ve heard that Everest is closed. That Sherpas are refusing to work. That they won’t be paid. That the Sherpas have threatened climbers still desiring to head up the mountain.

Much of what has been reported is incomplete at best, and completely wrong at worst, gleaned from the coconut-telephone that these days passes for reporting.

Missing from the conversation has been the voice of the Sherpas themselves. Within this small and tight-knit and typically reticent community, the loss of so many fathers, brothers, sons and friends has been devastating. And the mourning continues—the funeral puja for head guide Ankaji Sherpa, 36 and father of six, was held yesterday. 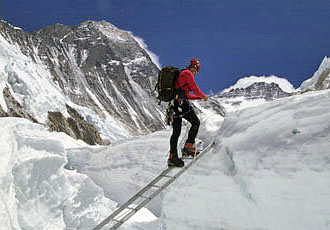 What follows is an interview with Sumit Joshi, founder of the Nepalese guide service, Himalayan Ascent, as relayed by his wife Sabita Rana. Himalayan Ascent lost three Sherpas in the icefall including Ankaji Sherpa. Two remain missing.

Are the Sherpas on the south side all ceasing their work on Everest?

Maybe some 90 percent have left, there are expeditions still packing up. So far no one has gone through the icefall again. The ice fall doctors are still there in case anyone wants to continue, but so far it seems as though nobody has moved up the mountain.

Is this just for the pre-monsoon season? Will they return for the post season?

Yes this is just for this season. Most [Sherpas] are still mourning and they feel uncomfortable crossing the ice fall so close after the deaths. They will work again in the autumn season.

Will the Sherpas be paid even though they won’t be working on Everest?

I think most companies will pay their Sherpas except for the summit bonus. We paid our guides. The 13-point list included a point that everyone would get paid even if they don’t continue. Most of the major expedition companies agreed to this.

About how much, per Sherpa, will be lost by not working, and will they be able to find other work to fill in?

The pay depends per company and what job they are doing. It’s difficult to estimate how much they’d lose, but I am assuming most got paid. Unless they get some replacement jobs as a trekking guide or trekking peak guide so late in the season, I doubt many will find another job.

Are the Sherpas not working out of respect for those killed, or due to conditions that are too dangerous, or both?

Both. Out of respect and due to the dangerous conditions. There are still three bodies missing in the ice fall. The Sherpas don’t want to cross the ice fall knowing that the bodies of their friends are still there. They feel it’s disrespectful to “cross over” their bodies so soon after the accident. It doesn’t feel right. But they are also fearful for themselves and their families are pressuring them to return home too.

Do you think any teams will climb the South Col route without Sherpa support this season?

No, highly unlikely unless they are true climbers. Certainly not a commercial expedition.