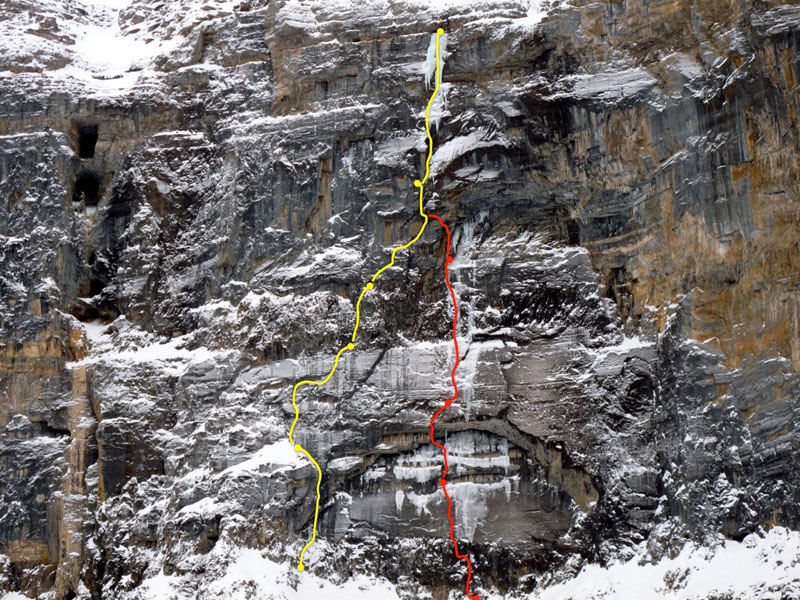 The Stanley Headwall, or THE Headwall of the Canadian Rockies, has had another big and hard route added, done ground up and in good style. The God Delusion (M8+ WI 5, 110 meters of new climbing) was completed by Raphael Slawinski, Juan Henriquez, with help from Wiktor Skupinski and Jerome Yerly. The line connects the dots of thin-ice features to the right of 2011’s Man Yoga, and includes three and a half new pitches before joining Man Yoga at pitch four.

Slawinski spied the line several years ago, getting especially interested when he repeated Man Yoga last year and this season saw that the line had formed more than in a typical season.

“’Formed,” says Slawinski, “is a relative term. Having said that, you do need some ice for this route. This season the wall is more icy than average, but there’s some ice on it every season. If I had to guess, I’d say the route’s probably doable every other season.”

Henriquez and Slawinski began work on the imposing line in November, climbing ground-up and always reclimbing the lower pitches to their high point. Four days of effort later, they connected with Man Yoga. Spending another day working the M8+ crux second pitch, Slawinski redpointed the entire climb on the sixth day.

“I thought the second pitch through the big arch would require figure-fours and similar shenanigans,” says Slawinski, “but in the end there was a break through the roof that allowed you to (mostly) keep your feet on.” 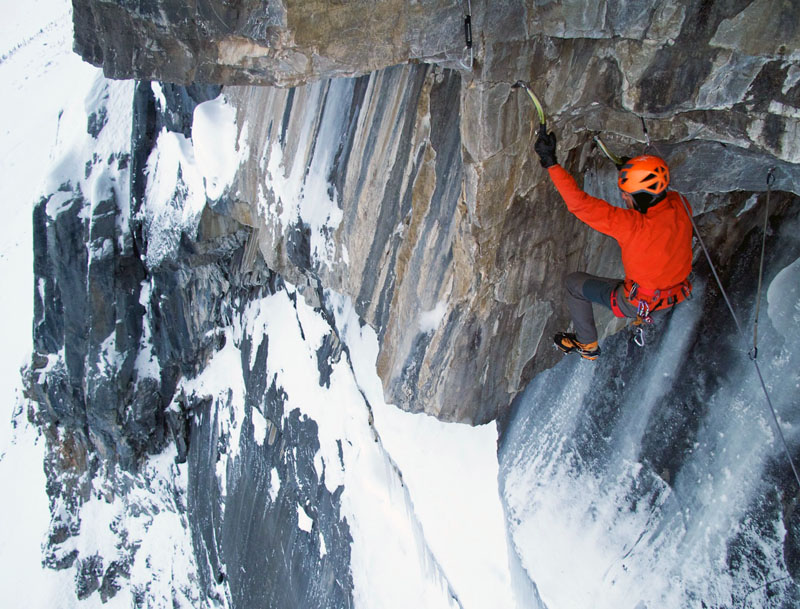 The route, though thin, is mostly ice with only occasionaly dry tooling. “However, the ice being either too thin or too hollow for screws (in a good year!),” says Slawinski, “the climbing is mostly bolt protected (though finding the bolts might require some clearing of snow and ice).” Forty bolts were placed counting anchors.

Slawinski notes that pitches one through four are completely bolted and have a few fixed pins. Pitch five is all natural pro.

Slawinski also adds that, like Man Yoga, the God Delusion is natural with no drilled placements. “I find it interesting that while the chipping of rock routes has largely gone the way of tight lycra,” says Slawinski, “drilling holds on drytooling routes seems to have gained greater acceptance. If I had to guess, I’d say places like the Playground are rationalized as being nothing more than fun outdoor gyms. And drilling placements on drytooling routes in general, big or small, is deemed OK because climbing with tools is chipping anyway, so why not throw the power drill into the tool box?” 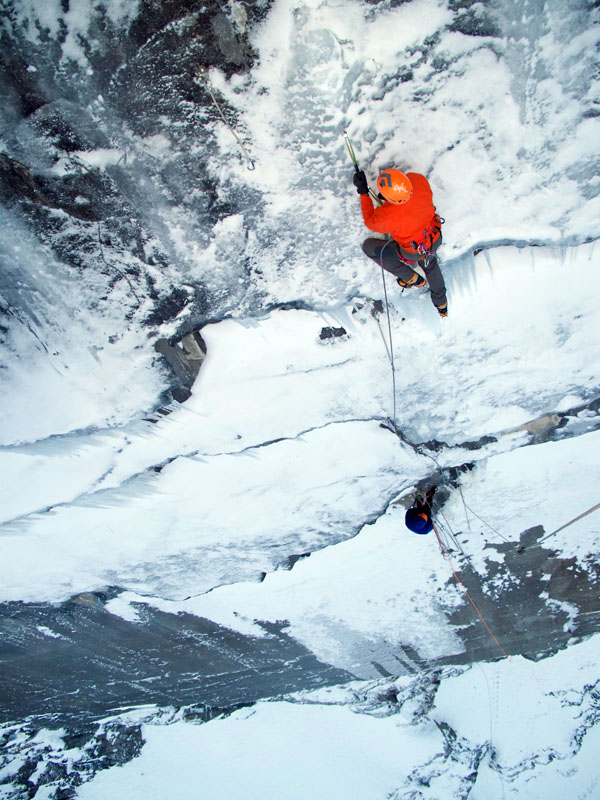 Counting God Delusion, the Headwall now has some 20 lines and major variations, plus another 10 or so one-pitch routes in the Thriller Cave, a bolted mixed sport area.

Slawinski, who in 2008 added five new lines to the Stanley Headwall including Clucking (M6 WI 5, 200 meters) and An Ideal For Living (M6 WI 5 x, 100 meters), says that while God Delusion is not the area’s hardest nor the most serious, “it’s definitely one of the most sustained. … you have to stay focused essentially throughout.” 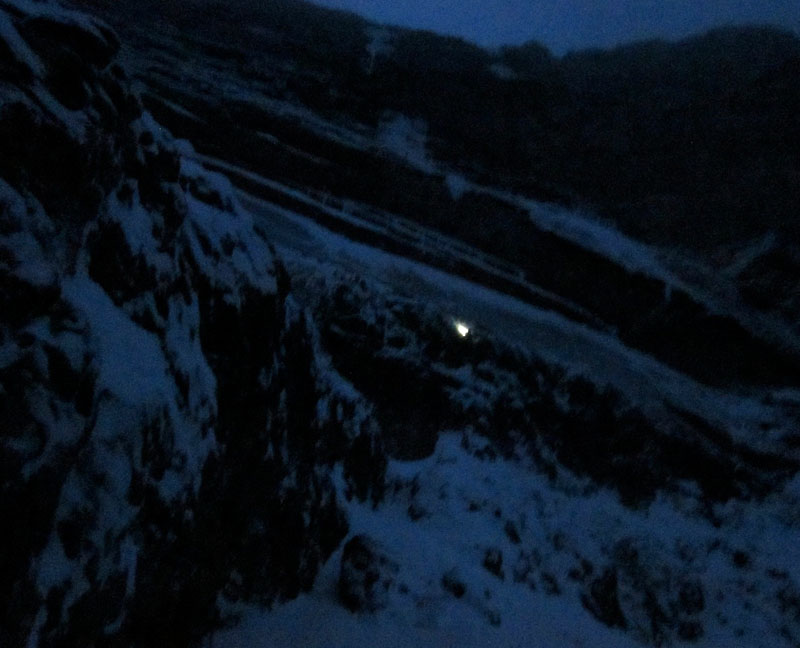 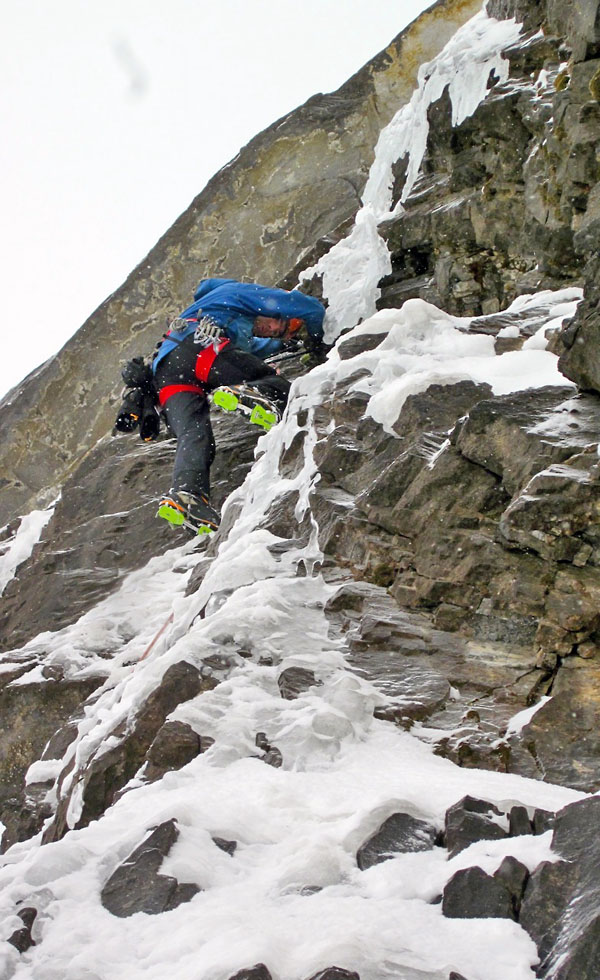