From high above the rusted desert, Canyonlands looked vacant, boundless and wide-open. Massive rock formations down on
the sandy floor—jagged cliffs, rock islands and spires—were as small as Legos on a red carpet. From our view riding the air currents in
a Cessna 210, the power of geologic time’s grind on the stony architecture was almost frighteningly stark. A climber wouldn’t be detectable from up
here, invisible as a bug on a beach. 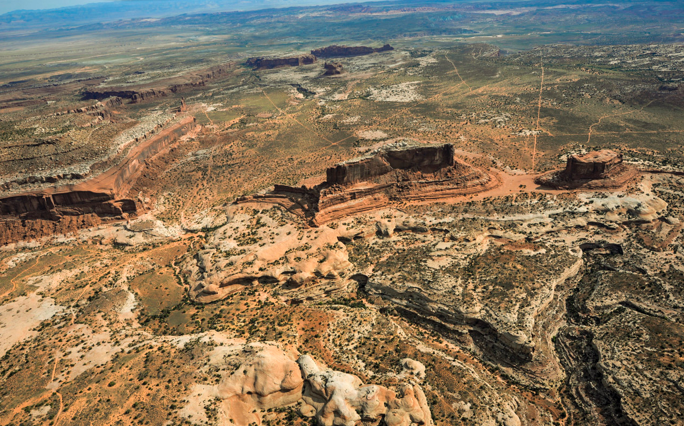 After taking off from Moab, 40 miles to the north, our single-propeller craft shuddered as we banked
left over Indian Creek. The roaring engine was the only sound in the vibrating cabin when Leland Begay, a legal counsel for the Ute tribe, spoke.

“So how hard are the climbs down there?”

Aaron Mike, the Native Lands Coordinator for the Access Fund, began explaining the workings of trad climbing from behind Begay. Mike is Navajo. He was
raised on a reservation, and is eloquently passionate about the economic boost climbing could bring to reservations.

“There’s a disconnect about what rock climbers do,” Mike told me. “It helps to explain that climbers take care of the environment, that for a lot of us
it’s our church.”

In an identical plane ahead of us, Jason Keith, the senior policy advisor to the Access Fund, had been narrating specifics of the geography below on our
crackling headsets as we gazed down upon the great Utah desert.

If congressman Rob Bishop’s Public Lands Initiative passes in the legislature—he’s expected to submit a final proposal soon—portions of this
landscape could be handed over to private companies for energy exploration, livestock grazing and mineral development.

When the crack-climbing mecca of Indian Creek crept smoothly into view beneath my window, it simply looked like tiny burnt-orange walls—just another
section of rock that time forgot to crumble. Unremarkable and lonely on the ancient seafloor, the Creek was soon gobbled up by the blue-banded horizon
as we flew onward. 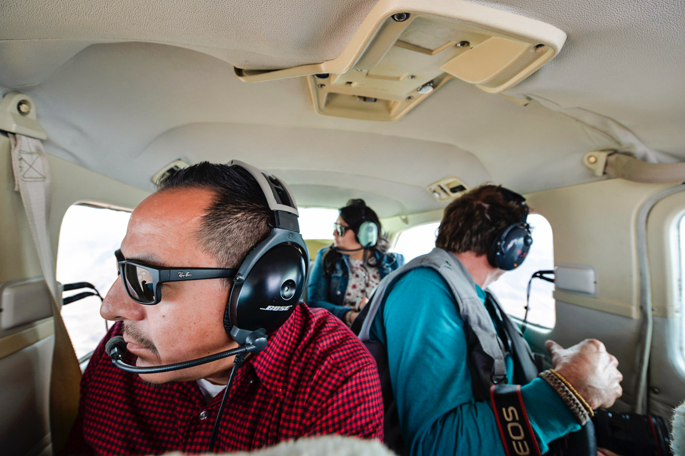 Climbing areas are sacred to climbers, but so are some of the sites they sit on. The flight reinforced
that climbers and Bears Ears Inter-Tribal Coalition don’t just value the crags or archaeology in this region—they covet the history their respective
clans have etched into these rocks.

Bishop, with his Public Lands Initiative, joins the fight for a slice of Utah. Bishop, a Republican
Congressman in Utah, is the chairman of both the Committee on Natural Resources and the Subcommittee on Public Lands and Environmental Regulation.
He created the PLI—a plan intended to balance land protection with enhanced industrial development.

“While many stakeholders and public land supporters argue that the draft PLI is not balanced and will harm irreplaceable public resources,” states Jason
Keith of the Access Fund, “[the draft] doesn’t provide sufficient protections for the Bears Ears region, and does not reflect the three years of local
community input.

“The Access Fund will continue to work with Congress to find the right balance for conservation and climbing access in Eastern Utah,” he stated. He cited
collaboration with colleagues at Outdoor Alliance. The Access Fund has stated that as a general principle it prefers legislative solutions to executive
orders.

The PLI isn’t the only option on the table, however, and the AF is fostering a relationship with the Bears Ears Inter-Tribal Coalition.

The Bears Ears Inter-Tribal Coalition—comprised of tribal leaders
representing a five-tribe federation of Hopi, Navajo, Ute Mountain Ute, Pueblo of Zuni, and Ute Indian Tribe Native Americans—opposes the PLI
and advocates the establishment of the Bears Ears National Monument instead.

The proposed Bears Ears National Monument—a 1.9-million-acre wedge of Utah that politicians, businesspeople and Native American tribes have fought
over for years—encompasses the legendary desert-climbing area of Indian Creek, and the lesser-known but equally important Arch Canyon and Valley
of the Gods. 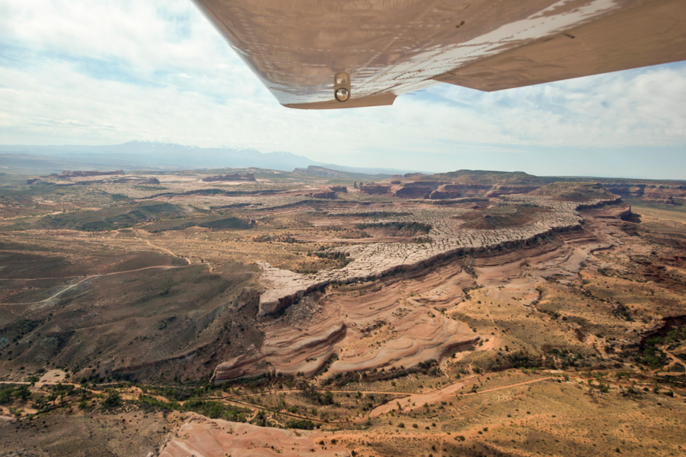 It was for this reason that the Access Fund and American Alpine Club organized an EcoFlight over Utah
with representatives from the Bears Ears Inter-Tribal Coalition.

Two hours after our plane touched down on the scorching tarmac, Octavius Seowtewa, a representative of the Zuni people for the Bears Ears Inter-Tribal
Coalition, sat on a bench under the shade of a tree.

“Looking down at the Bears Ears area, the vast landscape, thinking about the medicinal plants and the animals there, that was special,” he said quietly.

When asked what he hoped to accomplish by viewing the area, Octavius, who is the head of the Zuni’s medicine society, responded: “We know some of the ancestral
archaeology sites down there. Think of the possibility of finding new sites, new petroglyphs, new shrines. All the National Parks have federal agencies
protecting them, but this is a new venture because we want to have a native voice in the decisions. We know what we want protected and how we want
it protected. Who better than the people who know it best?”

Land has always been a volatile issue in Utah, where the federal government manages two-thirds of it. From 1930 to 1980, 14 million acres of previously pristine BLM land felt infrastructure and industrial transformation. Since then, conservationists
have kept most public land from being developed by filing complex lawsuits that slow down the process.

The Bears Ears battle began in 2009 when the Obama
Administration published a shortlist of regions it hoped to designate as national monuments. Cedar Mesa, the plateau in San Juan County that constitutes
much of the proposed Bears Ears National Monument, was on that list. In 2010, then senator Bob Bennett (R-UT) debuted his own land proposal in an effort
to preempt establishment of the national monument. A group of Navajo in San Juan County responded to the proposal by forming a non-profit, Utah Dine Bikeyah, to advocate for enhanced archaeology and rock-art protections in that area. Senator Bennett lost re-election,
a Tea Party member took his place, and Bishop expressed his determination to put forth a land proposal of his own; the eventual proposal was the PLI. 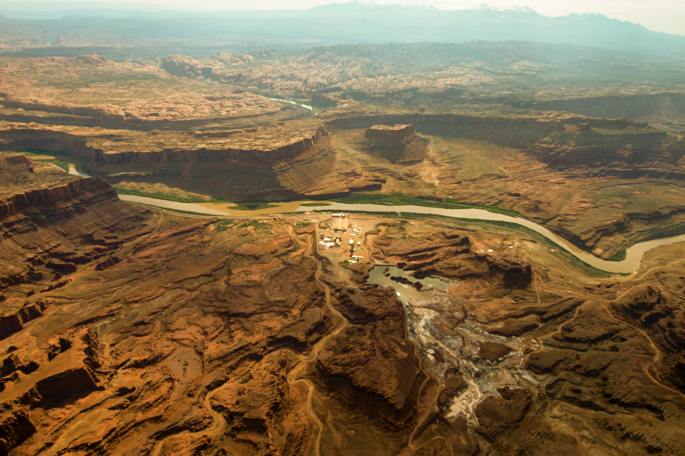 In 2012, the Access Fund began lobbying federal, state and local politicians to consider climbing-access conflicts that could arise, or be solved
by, the new map Bishop hoped to draw. At that point Bishop had not released the PLI and was simply asking various organizations what issues they wanted
the PLI to solve.

Utah Dine Bikeyah, aware of Rob Bishop’s conservative bent, believed the PLI would be an unacceptable plan and rallied other tribes to the cause. In July
2015 the Bears Ears Inter-Tribal Coalition was formed, and Utah Dine Bikeyah turned over leadership to the coalition. Three months later, the new alliance
of tribes proposed the Bears Ears National Monument designation to the Obama Administration, preempting Bishop’s PLI.

In January 2016 Congressman Bishop finally unveiled the long-awaited PLI discussion draft.
The sweeping proposal he claimed would settle Utah’s land disputes once and for all fell flat. The PLI would protect 4.3 million acres in northern
and eastern Utah, but it restricted future administrations from designating any more national monuments, and stripped protections from millions of acres to create roads and dig for oil
and gas. The coalition immediately opposed it.

The Access Fund had worked for nearly three years advocating access considerations the PLI should include, but realized that Bishop’s draft wasn’t the
grand compromise the organization had hoped for. Disappointed but optimistic that a new solution could be found, the AF continues to lobby Bishop.

“The Access Fund is a strong supporter of permanently protecting the Bears Ears region in southeastern Utah from impacts caused by looting, vandalism,
resource extraction and careless or irresponsible visitation,” states Jason Keith of the Access Fund. “We support collaborative management of federal
lands at Bears Ears in a way that honors the traditional and ancestral ties of Native American people to these lands while also protecting this world-class
landscape for all Americans … The Bears Ears area contains many world-class recreation opportunities that the Access Fund believes will benefit from
a protective status and management.” 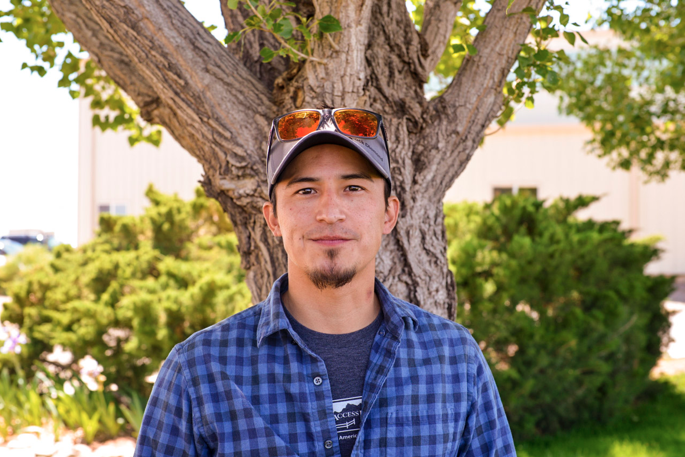 The Access
Fund and Native American tribes have butted agendas in the past, which makes their current collaboration on Bears Ears all the more important. In 1997, a Washoe tribe complained that climbing on Cave Rock,
by Lake Tahoe, Nevada, was sacrilegious, and the sport was banned there, though boating, fishing and picnicking continued. In 2003 the sanction was
upheld in court and despite a 2005 appeal by the Access Fund—which called the ban unconstitutional—the Ninth Circuit Court of Appeals maintained
the injunction.

Sometimes the Access Fund found common ground with tribes. Devils Tower National Monument,
Wyoming, has long been a popular destination for both climbers and native tribes who consider the butte sacred. In 1995, the National Park Service
instituted a voluntary ban on
climbing during June to respect the tribes that practice religious rituals during that month. The Access Fund publicly supports the “voluntary ban.”

Some access disputes span decades; past and potential closures at Hueco Tanks [see Rock and Ice issue 235 (July 2016) for a full report] are an example. At Hueco, a famous climbing area and a sacred tribal site full
of rock art overlap. In 2014, Texas Parks and Wildlife Department (TPWD) began re-evaluating the Public Use Plan at the Tanks, and all boulders in
the park are being scanned with a specialized “DStretch” camera to detect rock art invisible
to the naked eye.

The Bears Ears Inter-Tribal Coalition craves
a national monument because it would protect the 100,000 historical sites the coalition estimates are within the area. Octavius Seowtewa hopes to discover more archaeological sites once Bears Ears is created.

Climbers, Octavius says, are not only welcome allies but they’re also indispensable. “Climbers go to places where ordinary people don’t go. They may find
new archaeology that we don’t know about. We would have a passionate group of people out there, and they would be like an extra pair of eyes,” he mused.
In some areas, climbing may be in conflict with archaeology, but Seowtewa thinks that these access issues should be examined on a case-by-case basis,
rather than banned on climbing within Bears Ears.

Communication between the Access Fund and the coalition may also be a chance for the climbing community to build trust and respect with several tribes
in the West. Both communities share a love of nature and a desire to see as little industrial development as possible on pristine lands. 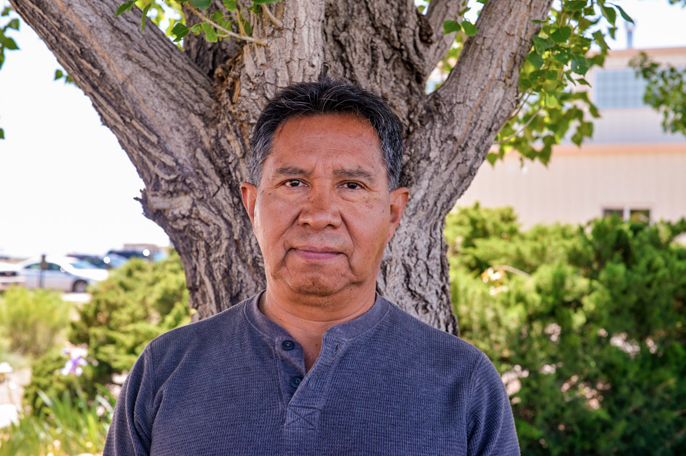 That afternoon at Canyonlands Field Airport, I asked Octavius if he thought climbers and native peoples
could share the Bears Ears area without conflict. Octavius sat with the question for several moments.

“Bishop’s bill [is] talking about improving protections for the land, and improving roads so people can come visit places like this, but it’s not what
they’re really looking at. They’re looking at oil and other resources that would only benefit a few rich people.”

Octavius paused as a helicopter buzzed over us. “I hadn’t heard of the Access Fund before the flight. Talking to them here, I see they hold the same respect
for the land as we do.

“Think of Native Americans as the first rock climbers.”

This article was updated on June 30 to add new information.