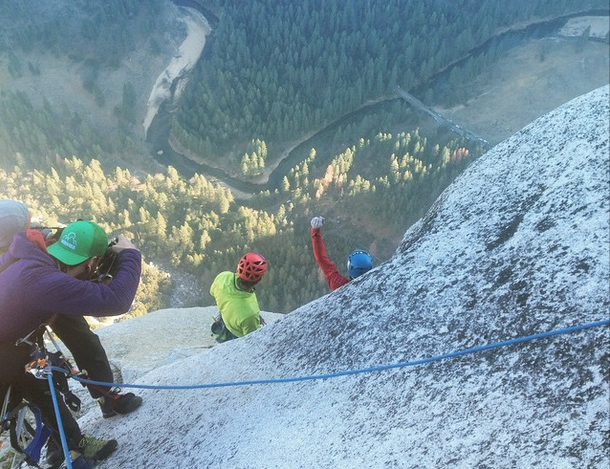 After seven years, and a final push that lasted a solid 19 days, the Dawn Wall has been free climbed by Tommy Caldwell and Kevin Jorgeson.

“So proud of these guys!! ” posted Alex Honnold on Instagram. “So, so psyched!! “

Honnold was among the friends and family of the climbers waiting at the top of El Cap.

While viewers from around the globe tuned in for a live feed, which showed Jorgeson and Caldwell climbing the final four pitches, history was made. Caldwell led the final pitch with Jorgeson following, and the two embraced on the summit of El Cap with the climbing world watching. Now, the Dawn Wall, a 32-pitch big-wall route with 7 pitches of 5.14 (two clocking in at a desperate 5.14d), will likely be touted as the hardest rock climb in the world.

“One man can be a crucial ingredient on a team, but one man cannot make a team ” -Kareem Abdul-Jabbar @kaj33 Beyond words. Incredibly moved. Congratulations @kjorgeson @tommycaldwell you inspire us all! #dawnwall