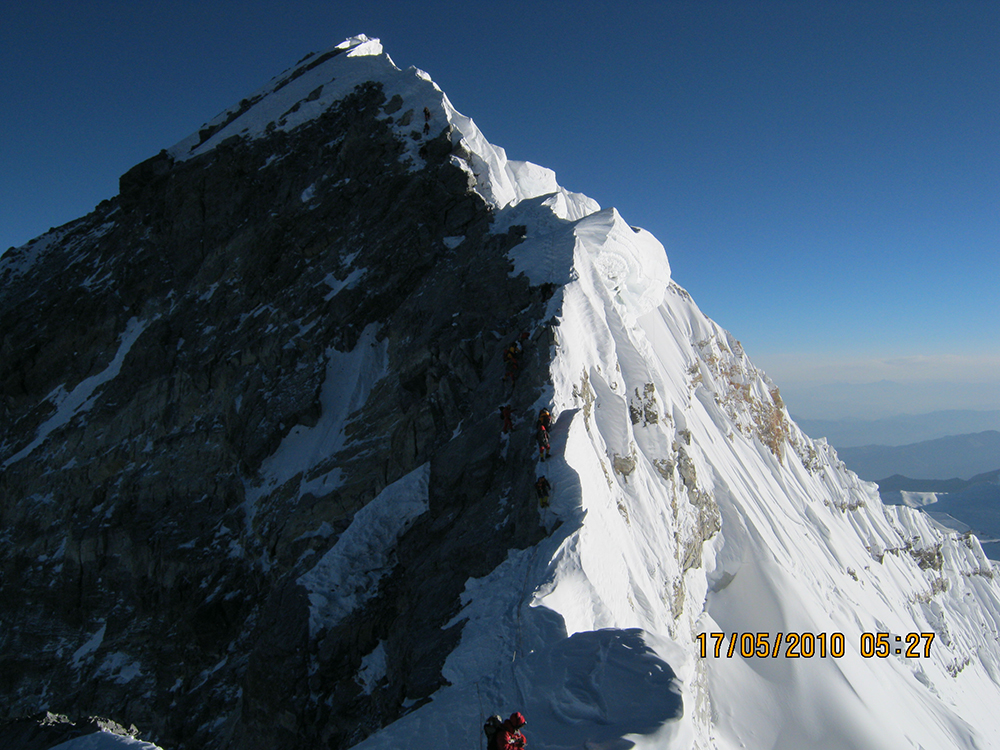 The infamous Hillary Step, the iconic last hurdle to the summit of Mount Everest via the South Col, is gone according
to British mountaineer Tim Mosedale.

The 12-meter near-vertical rocky outcrop, located at 8,790 meters on the south-east ridge of Everest, is named after New Zealand’s Sir Edmund Hillary who,
along with Tenzing Norgay, was the first person to climb the mountain in 1953.

Mosedale, who summited Everest for the sixth time on May 16th, claims that the Hillary Step is gone and was likely to have been destroyed during the
magnitude 7.8 earthquake that struck the region in 2015.

Back in May 2016, the American Himalayan Foundation posted photos that appeared to show that the Hillary Step had changed, but snowfall precluded determining whether this was true or not.
This year, with less snow, according to Mosedale, it is clear the Step has gone.

“It was reported last year, and indeed I climbed it last year, but we weren’t sure for certain that the step had gone because the area was blasted with
snow. This year, however, I can report that the chunk of rock named the Hillary Step is definitely not there any more,” says Mosedale on Facebook.

Nepalese officials and the Sherpa community, however, disagree with Mosedale’s claims. Pasang Tenzing Sherpa, who has just returned from the mountain,
insisted that the step was intact and Ang Tshering Sherpa, President of Nepal Mountaineering Association, said, “This is a false rumor. After this
news surfaced, I checked with Sherpas, climbers, and officials at the Base Camp. Hillary Step is intact.”

He continued to tell BBC Nepali, “Nothing has happened to Hillary Step as a result
of the earthquake. It’s only that only a small portion of the rock is visible, the rest is under snow.”

If Mosedale is correct and the Step is gone, there may be serious repercussions for Everest ascentionists. The new geomorphology may make the climb easier
as it eliminates the section of technical climbing. Alternatively, during low snow years, the loose rock of the broken section could render the climb
more dangerous, and limited space for fixed lines up the new terrain may create an even larger-than-before human traffic jam, forcing climbers to wait
perilously long times in the life-threatening high-altitude conditions.

“It’s easier going up the snow slope and indeed for inexperienced climbers and mountaineers there’s less ‘climbing’ to be done, making it much easier for
them,” Mosedale told Planet Mountain.

“However, it’s going to form a bottleneck. The Hillary Step often formed a bottleneck but some years ago they fixed an up and a down rope. In the current
state it would be difficult to safely negotiate down where the step used to be on account of the huge unstable rocks that are perched on the route.”

The loss of the Step would also be a loss to mountaineering folklore, and it is for this reason that the Nepali sherpas may be reluctant to concede it’s
disappearance. The snow covering, personal opinions and lack of consistent photographs also prevent a definitive answer being obtained. It may be that
the Step has simply changed, with one or more of the boulders that constitute it having been moved or dislodged completely. As the season continues
no doubt new evidence and opinions will be presented to help provide a more definitive answer on the fate of this infamous last obstacle to the roof
of the world.

The 2015 Nepali Earthquake and Everest Avalanche

TNB: Things—Besides Us, That Is—That Fall