Scott Bennett and Brad Gobright have reclaimed their speed record on The Naked Edge (5.11), climbing the 460-foot route in a blistering 26 minutes, 16 seconds. Their climb, on Wednesday, is 15 seconds faster than the previous record set by Jason Wells and Stefan Griebel in August. 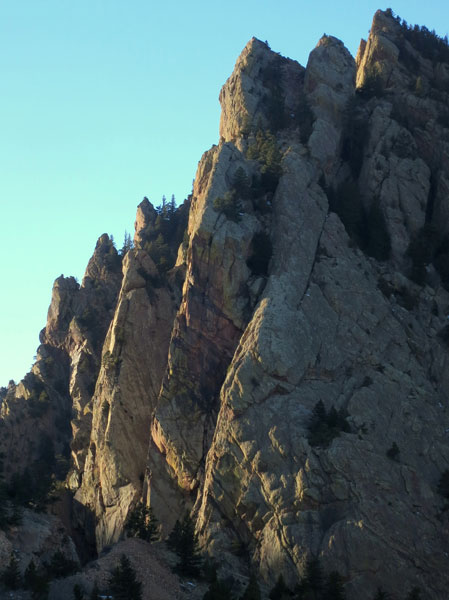 Bennett starting leading immediately after running the approach and soloing some ledges and ramps up to 5.8. “My heart rate and breathing were super high. I had to take a quick rest before entering the most runout section of the route for fear that I wouldn’t be able to stay calm while breathing so hard!” he wrote in an email exchange with Rock and Ice.

Completing Eldorado Canyon’s The Naked Edge, one of the most classic climbs in the United States, involves the time it takes to go “bridge-to-bridge,” or round-trip from the approach/descent trail.

On August 16 Wells and Griebel climbed The Naked Edge in 26:33, breaking Bennett and Gobright’s record of 29:53, which was set on June 10. In January 2013, Bennett and Gobright completed the climb in 44 minutes, which seemed as almost preposterously fast at the time.

Although the rivalry has pushed them ever faster, the climbers remain amicable, even having the competing pair time them.

The evening Bennett and Gobright set the current record, Griebel posted on Mountain Project, “Scott and Brad just lowered [the record] to 26m16s this evening. Wow, speed climbing this thing is so much fun! Go do it!!”