This time last year Craig DeMartino and Matt Hulet were driving to Chris Sharma’s launch party at Sender One in L.A. and were
discussing adaptive climbing. “Hulet asked me what one of the biggest challenges for amputee climbers was,” says Craig DeMartino, a professional adaptive
climber and coach based in Colorado, “I told him the [specialized prosthetic] foot was really expensive, and when I taught folks to climb, they wanted
the same kind I used but the price kept people away.” 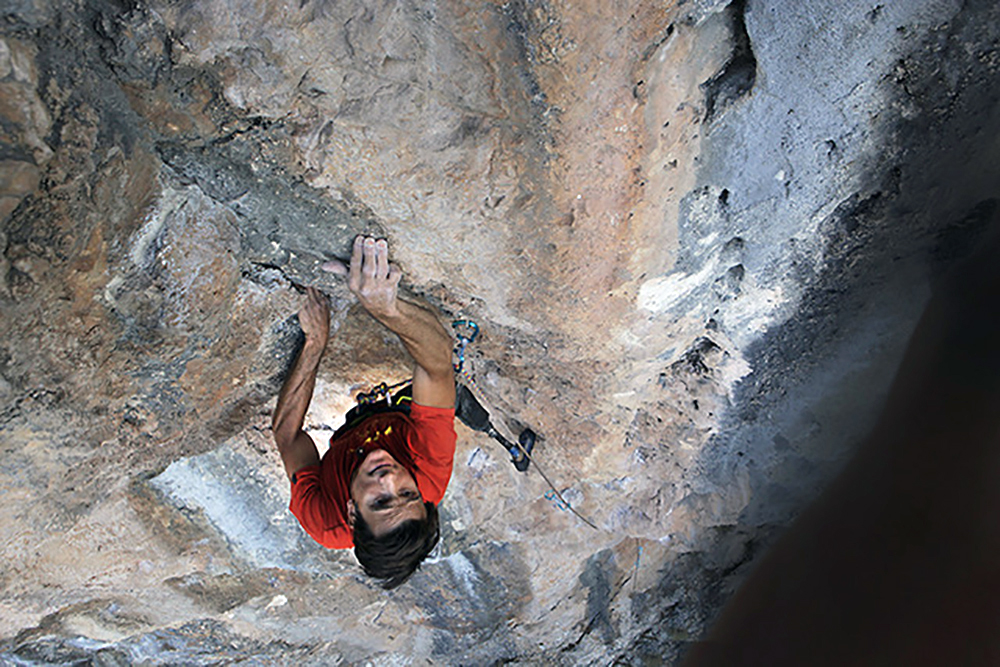 That conversation with Hulet, Brand Manager for Evolv, sparked a yearlong
design project, and last month Evolv revealed the result with the release of the company’s new Adaptive Foot, designed to be an affordable option for lower-limb amputees wanting to get into or improve their climbing.

High manufacturing costs and insurance charges, often reaching thousands of dollars, mean that sport-specific prosthetics are economically infeasible and
a barrier for most adaptive climbers.

“I was going to national level events, and seeing amputees climb with cut 2 × 4’s and some rubber glued to it being used as climbing feet,” Hulet stated
in a press release. “I knew we had to find a better option.”

Evolv has had a longstanding relationship with the adaptive climbing community, and counts more than a dozen adaptive athletes on its elite, national and
international teams. The company worked closely with several adaptive athletes, including Demartino, Ronnie Dickson [see video below] and Malcolm Daly,
when designing and testing the Adaptive Foot.

In 2007 Evolv partnered with TRS Prosthetics to develop the Eldorado Z-Axis Climbing Foot and Eldo Z climbing shoe. However the entry price for this foot, which is classed as a medical prosthetic, is around $1,200 and is
not covered by insurance, rendering it unattainable to many.

Hulet, who has a personal interest in adaptive climbing through his work with amputee veterans, was a driving force in bringing the Adaptive Foot to market.
He says “The design was not the main challenge; the bigger challenge was to make the Adaptive Foot affordable. Normal prosthetic feet cost between
$1,000 and $1,400 and are not covered by insurance. This instantly closes off climbing to a large number of amputees and adaptive climbers.” 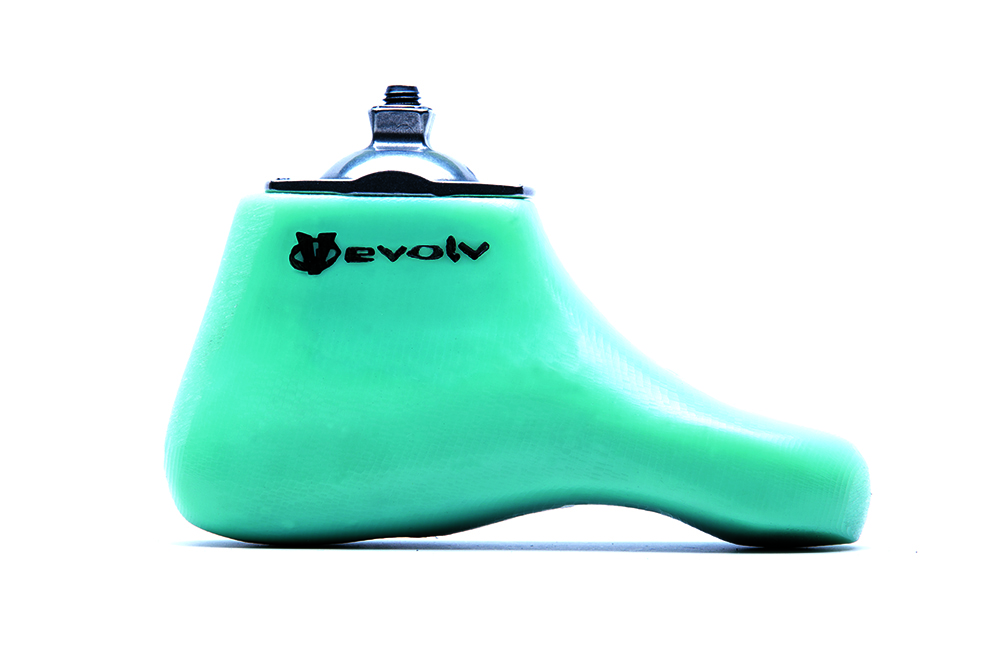 At $200, the Adaptive Foot is priced with no major profit margin and will only be available directly through Evolv, not through third-party retailers,
in order to keep the cost low. It is also not officially classed as a prosthetic, which helps minimize cost. It is designed to be light and unrestrictive,
and to increase performance on the rock. The combination of the foot shell and Evolv’s Eldo Z shoe, which fits it perfectly and features sticky Trax
rubber, allows climbers to use their feet on all varieties of terrain. 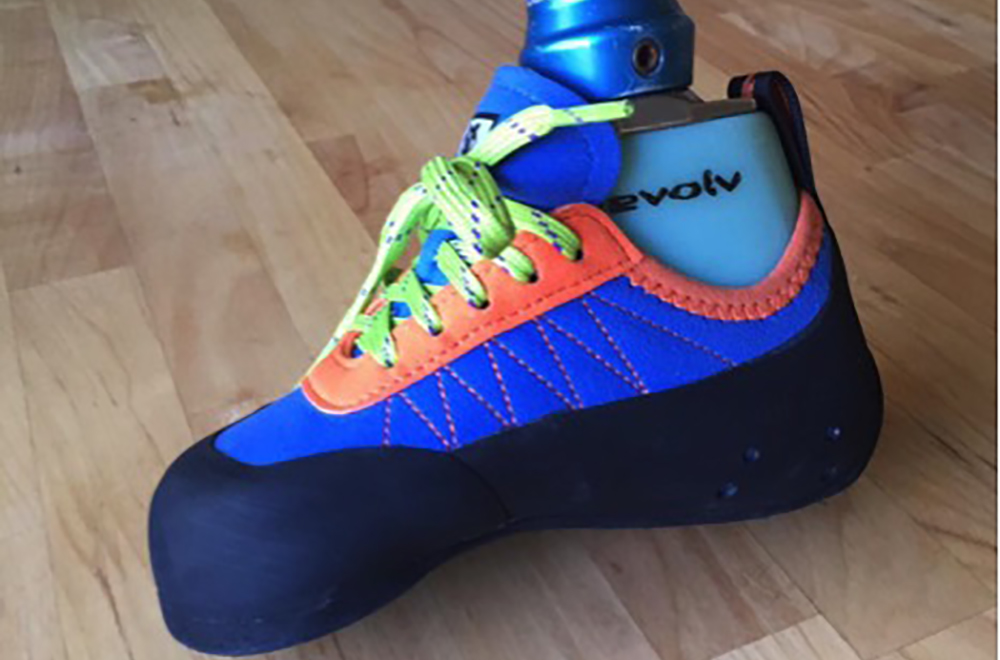 Features of the Adaptive Foot, according to the company, include: a short overall length that helps the climber to smear and high step without the foot
rotating and popping off; a symmetrical round toe, which removes left/right foot differences and helps allow use on all types of terrain; and a high
forward arch so that the adaptive climber can hook the foot over a high edge, then roll up onto it.

“This foot and the shoe make a huge difference in my climbing,” says DeMartino. “I’ve climbed harder routes with this foot than I climbed as an able-bodied
climber! That might say a lot about my footwork when I had all my appendages … but the foot is amazing!” 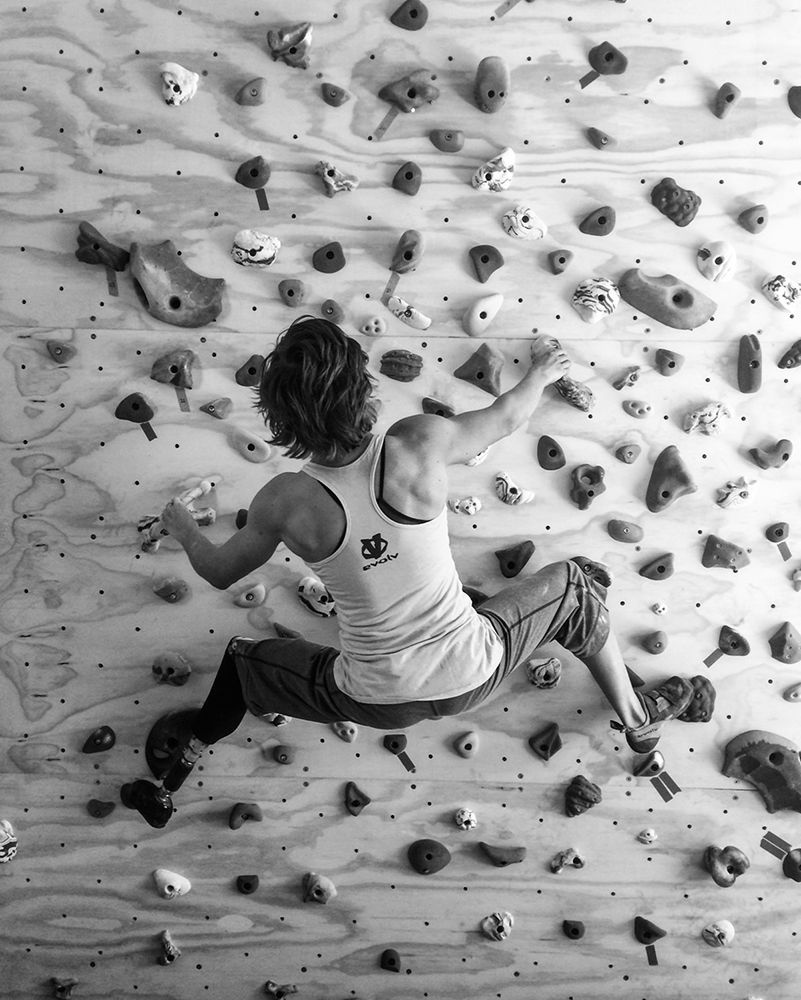 Kate Sawford, a Canadian living in Australia, should be receiving her new Adaptive Foot in the next few weeks. Sawford has been an avid climber for a decade
and is a three-time World Paraclimbing Silver Medalist, taking second place in the 2014, 2015 and 2016 World Championships. She lost her left leg to
cancer as a child and first took up climbing in 2007.

“When I first started I was shoving a climbing shoe onto a [prosthetic] walking foot, which was terrible,” says Sawford. “You can’t get over the toe on
a walking foot. They roll off things. Also, there’s no movement in the ankle, which also prevents putting weight through the toe.”

When asked about the challenges she faces in climbing, Sawford says: “I am very dominant on the non-amputated side of my body, and this affects movement
patterns. I use a systems board to train symmetry every time I train. This helps push my limits about what I can get out of my left foot. Part of that
is having the right tools.”

Sawford has tried the previous Eldorado Z-Axis Climbing Foot and the Evolv Eldo Z shoe, but opted to create her own, making a more flexible foot using
a kid’s prosthetic that she cut to size and which Evolv later covered with its rubber.

She hopes that this affordable EAF will help to make adaptive climbing more accessible, particularly for women and girls.

“Female disabled athletes are less common than male,” Sawford says, “and I’m interested in getting [the Adaptive Foot] out there for that reason. There
is benefit for women, in particular, with disabilities to having better access to climbing.”

“This is going to make climbing quite accessible for people whom it would not have been before, or at least for whom it would have been a lot more difficult,”
she says, commending Evolv for investing “a lot of effort and time into something that won’t bring financial gain.”

DeMartino says, “I don’t know many companies in this day and age who are willing to do something to just help people.”

Based on his experience in coaching, competing and professional adaptive climbing, DeMartino feels that the climbing community as a whole supports adaptive
climbers.

“Getting into climbing is easier than ever now for lower-limb amputees,” he says. “I teach adaptive clinics to people who have gone through trauma and
want to climb, and the interest I see is really growing … Folks from all backgrounds are finding climbing to be a great way to get back to an
active lifestyle or start a life of activity and inclusivity. I think that’s something that climbing does as well: it welcomes all.”