Excerpt from Chapter 4 – Climbing and Chopping the Compressor Route 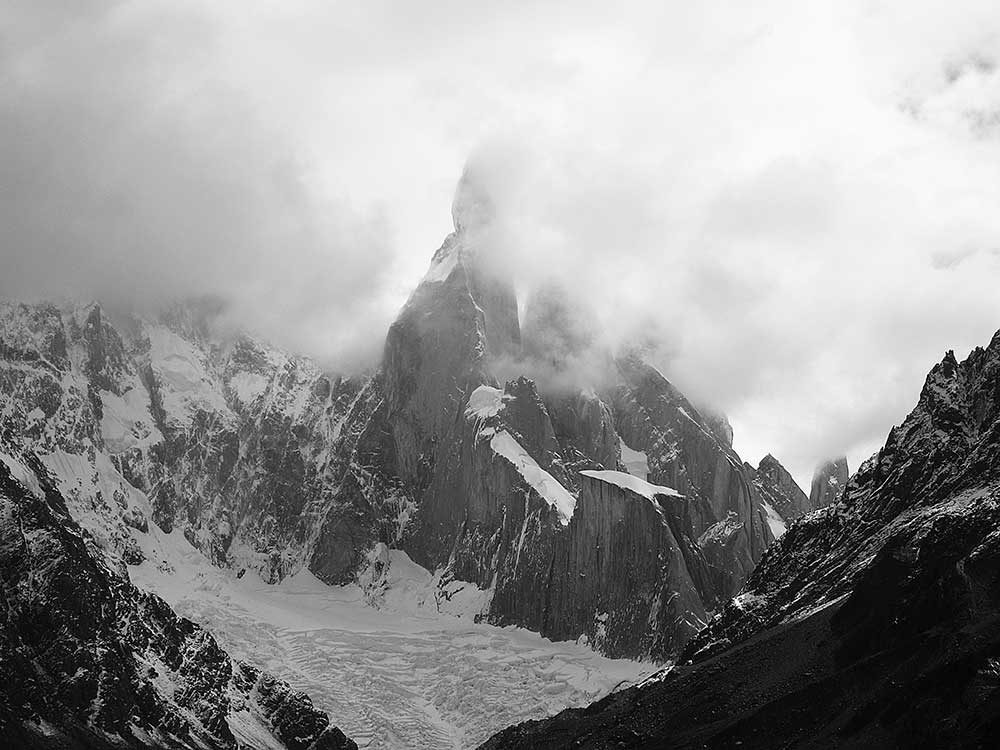 THEY WOKE AT 2:00 A.M. on January 16, brewed coffee, and forty-five minutes later began climbing. Shouts of joy escaped as they swiftly climbed the moderate lower flanks of the ridge, their frozen breath drifting through the beams of their headlamps, perfect cracks leading them to the first major decision point. They’d more than made up for oversleeping, and sat and waited for daylight. Orange alpenglow fluttered low on the horizon, spread out like baseline fires on the curve of the earth.

At dawn they saw the first of Maestri’s bolt ladders, some one hundred bolts, two feet apart, heading up and to the right. Just above them was a natural weakness—a laser-cut seam in the flawless granite. Hayden Kennedy alternately free climbed and aided through the crack using small cams and the occasional knifeblade piton. Higher, the rock unveiled perfect 5.10 edges at ideal intervals. The daunting and frigid south face fell away for four thousand feet to his left. Kennedy short-fixed the rope while Jason Kruk jumared behind. They moved with well-tuned efficiency and soon gained the ice towers.

Kruk was the team’s ice specialist—he’s Canadian, after all—and he smoothly led through ice and mixed terrain, still not clipping any of Maestri’s bolts, looking at the line like it was a natural alpine route. Where another of Maestri’s bolt ladders angled up rightward, around the corner to the left was a brilliant chimney of perfect, solid ice. The ice pitch brought them to the base of Cerro Torre’s famed headwall faster than anybody could have imagined.

Kennedy took the lead again and floated up steep, positive holds, now nearly a mile above the twisting Torre Glacier, going left, then back right, piecing it together, guided by natural features and ignoring the bolt ladders. He climbed flakes and face holds, protected the intermittent cracks, foregoing protection when he had to—nothing more than alpine climbing, really. 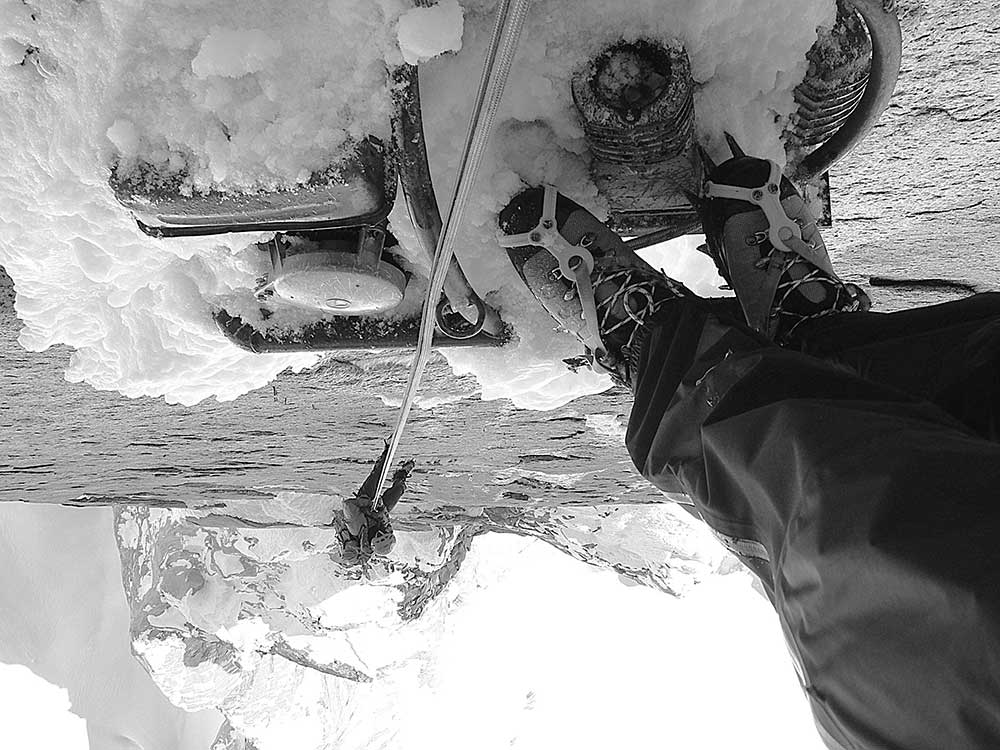 After a wild pendulum, using tension from the rope to run across the vertical wall, he latched a fingertip-edge and climbed to a stance where he set a belay. Discontinuous features rose above, with blobs of rime inexplicably stuck to the ninety-degree reddish-orange rock. Kennedy kept climbing, hanging on the occasional cam to clean ice from the cracks, switching between free and aid, connecting delicate face climbing traverses. Just below and to their right hung the 150-pound engine block, where it had been for four decades.

Suddenly, Kennedy let out a wild series of hoots; he’d topped out the headwall, completing a vision that began before Maestri came along with his compressor. A feat imagined for more than forty years: a fair-means ascent of the gorgeous Southeast Ridge of Cerro Torre. Theirs was a reification of a philosophy of how you climb mountains. In ignoring Maestri’s bolt ladders, they had climbed the line in a style that lived up to anybody’s standard—the way that, one suspects, it would have been climbed had Maestri not come along with his drilling machine. Together they hiked up the easy summit cone, found a flat spot to set down their gear and unrope, and climbed to the summit with one ice tool each.

They’d left their tent at the Col of Patience, 2,600 vertical feet below, merely thirteen hours before. It was only mid-afternoon. The weather was perfect. They could see forever across the ice cap to the west and to the timeless plains to the east.

Within the fuzzier realms of climbing’s mores, they had earned a sort of exclusive “right” by climbing the controversial line cleanly, by proving what had long been suspected: that Maestri’s interminable bolt ladders were unnecessary. Now, it was proven. They spent thirty minutes on the summit, relaxing and talking. An idea came to mind, one that had lurked in the minds of alpinists the world over since Maestri drilled his way up Cerro Torre in 1970. 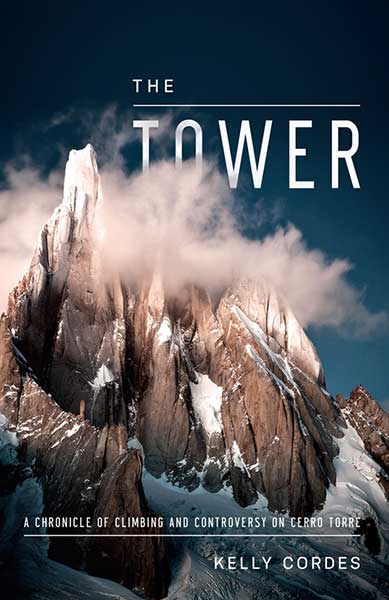 “We had an opportunity to remove the bolts unlike anyone else previously,” Kruk reflected later. “If opportunity presents itself, you must seize it.”

AND SO, ON THE WAY DOWN, they seized the moment and cleaned all of Maestri’s progression bolts from the headwall, and more below. Kennedy and Kruk made it back to their tent at the col with 120 of Maestri’s old bolts on a string in their pack. The next day they returned at a leisurely pace to their bivy camp on the Torre Glacier, where they stayed through unsettled weather. A couple of days later, after a storm left the tips of the spires coated in rime that glowed orange in the sunlight, they loaded their packs and hiked to town. By early evening they finished walking the dusty trail to El Chaltén. Kruk dropped his pack and headed to a nearby phone center, while Kennedy ordered some food, showered, and waited in their rental cabin.

Little did they know that word of their de-bolting the Compressor Route had already made it to town, enraging a group of local climbers—and, soon, plenty more around the globe. By the time Kruk reached the call center, he found himself surrounded by some twenty angry locals. A police car arrived and took Kruk back to the cabin, but the mob grew, shouting and gathering around the pair’s house. Then, to the applause of the crowd, the cops hauled Kennedy and Kruk off to jail. While sitting in the police car, one local came to the car and screamed through the window at Kruk, “I will fuck you in the ass like you fucked me in the ass!”

This tiny, relaxed village in beautiful southern Patagonia immediately became the focus of a global climbing controversy widely considered the biggest in the last decade. Because of some old bolts? It seems absurd, except the roots of the story connect to an outsized mythology that began fifty-odd years earlier, fueled by something more than little pieces of metal, and ignited by the power of anger.

Soon afterward, in what could be called prescience, Hayden Kennedy’s father told him, “Some will call you and Jason heroes. Others will call you villains. Don’t buy into either narrative. Remember one thing: All this noise is someone else’s story, not yours.”

From The Tower: A Chronicle of Climbing and Controversy on Cerro Torre by Kelly Cordes. Copyright © 2014 by Patagonia®. Used by permission of Patagonia®, www.Patagonia.com/Books