Photographer Dustin Moore, who was on a photo shoot in Zion before the storm, captured a time-lapse of the action.

“We finished the shoot and were celebrating over margaritas when the storm rolled into town,” Moore told Rock and Ice. “Then things starting going nuts so I got all the gear back out.”

Just before 10 p.m., a bolt of lightning triggered a fire at what Moore calls the Nagas Wall, located climber’s right of West Temple—one of the largest sandstone walls in Zion.

The fire, dubbed the “Meridian Tower Fire” by Zion National Park Fire Management, was one of the two largest fires ignited that night. The other, named “Phantom Fire”, was located north of Church Mesa near Phantom Valley in the middle of the park—estimated at one half to one acre.

“Some of the smaller ignitions may have already burned themselves out or received precipitation,” says Eaker. 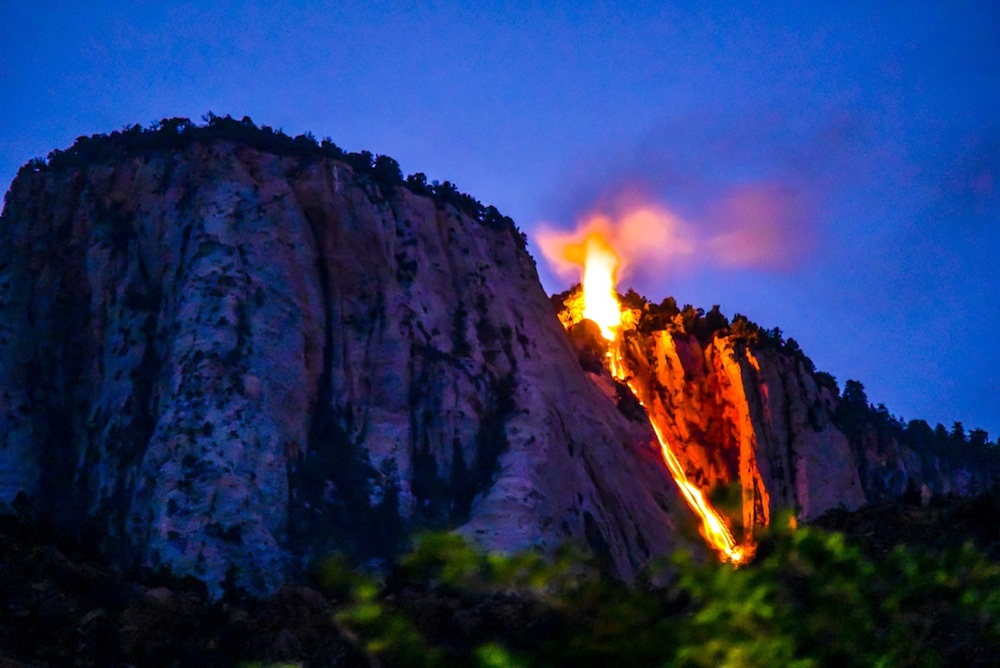 It’s unlikely that the 16 bolted belays of Back Where it All Begins suffered heat damaged, due to the distance between the fire and route. Anyone who wishes to climb in the area, however, should use caution.

In March, a wildfire blazed across the periphery of Cape Town, South Africa, for over six days, covering Table Mountain and the surrounding hills in a deep layer of ash. Rock was charred, new cracks formed and a few climbs lost holds due to exfoliation from the heat of the flames. Moreover, the integrity of bolts and anchors came into question.

Dustin Moore, always in the wrong place at the wrong time—or right, depending on how you look at it—also captured the massive rockfall in Yosemite’s Tenaya Canyon earlier this month.