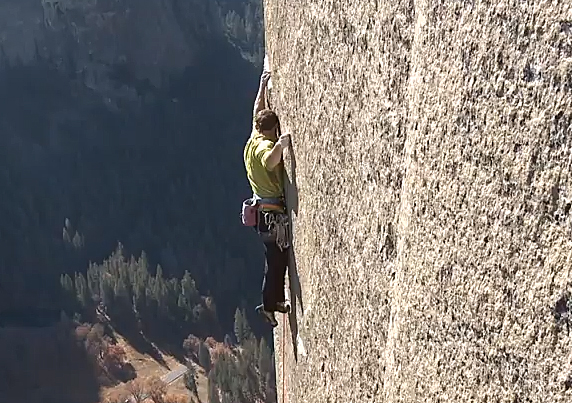 The Path (5.14a/b R) at Back of the Lake in Alberta, Canada. The Path was first established by Sonnie Trotter in 2007, who spotted an old, bolted project and became enticed by the line. One month ago, at Rock and Ice’s annual photo camp (see issue 213), Trotter explained that while he wasn’t opposed to sport climbing he felt that certain routes, such as The Path, are better left traditionally protected simply because they are more fun that way. He decided to remove the existing bolts and establish the route using gear instead.

Caldwell had attempted The Path two years earlier on rest day while working on The Shining (15 pitches, 5.13+) on nearby Mt. Louis. After top-roping the route a couple of times this year, he returned and was able to successfully stick the redpoint on his second lead attempt.

Caldwell has made a name for himself in several facets of the sport, including sport climbing, traditional climbing, and big wall free climbing. He completed the first ascent of Kryptonite (5.14c/d) and Flex Luthor (possibly the first 5.15a in North America and still unrepeated) at Colorado’s Fortress of Solitude. He was also the first person to free climb numerous routes on El Capitan in Yosemite National Park and has set several speed records in Yosemite as well.

As for the future, Caldwell will be traveling to Salt Lake City this week to compete in the Psicobloc Masters Deep Water soloing competition. He will be competing with other top names in climbing, including Chris Sharma, Dave Graham, Daniel Woods, Nalle Hukkataival, James Webb and more. The women’s bracket of this exciting event is equally stacked, drawing competitors like Sasha Diguilian, Emily Harrington, and Lynn Hill. In August, Caldwell plans to return to his home in Estes Park, Colorado to boulder and climb on Longs Peak’s Diamond. Afterwards, he intends to return to Yosemite to continue working on the Dawn Wall project, which if completed could be one of the most difficult big wall free climbs in the world.

Check out this video of Sonnie Trotter establishing The Path:

THE PATH from Sonnie Trotter on Vimeo.