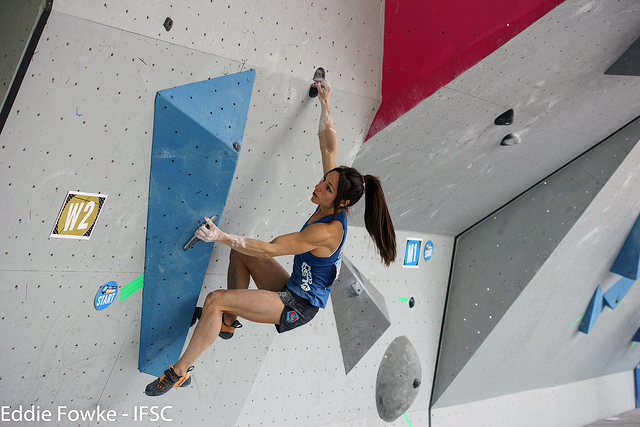 Top athletes from around the world will congregate in Vail, Colorado this weekend for a fierce round of world cup competition.

This Friday and Saturday (June 9th-10th) Vail will host the International Federation of Sport Climbing (IFSC) Bouldering World Cup for the fifth event
of the 2017 season. Men’s qualifying rounds will start at 9:00 a.m. and women begin at 3:00 p.m. on Friday. Semifinals are at 10:00 a.m., followed
by finals at 4:30 p.m. Saturday.

From team U.S.A., Margo Hayes, who swept the 2016 Youth World Championships in Guangzhou, China and recently became the first woman to climb 5.15a,
will climb with Alex Puccio—thwarted from the podium in recent years by a torn ACL/MCL in 2015 and a spinal injury in 2016—as well as Brooke Raboutou and Megan Mascarenas. Kai Lighter, who also performed
well in Guangzhou, will be joined by Daniel Woods, Nathaniel Coleman and Sean Bailey, among others.

The U.S. will be defending its home turf against the likes of Shauna Coxsey of Great Britain, who has already taken home first in Nanjing, China and Meiringen, Switzerland—half of the World Cup events of the 2017 season. Slovenian Janja Garnbret claimed the other two titles
for women, and will also be in attendance. The Japanese team has four of the top six slots in the men’s bouldering rankings, led by Keita Watabe in
first. Alexey Rubtsov of Russia is also worth watching. He took first in Tokyo last month. For a full list of competitors, visit ifsc-climbing.org.

In addition to the bouldering competition, the GoPro Mountain Games will be packed with whitewater
events, canine competitions, slacklining, free music and more. Be sure to stop by the Rock and Ice booth next to the climbing wall to say
hello and for free magazines!

Watch the highlights from last year: