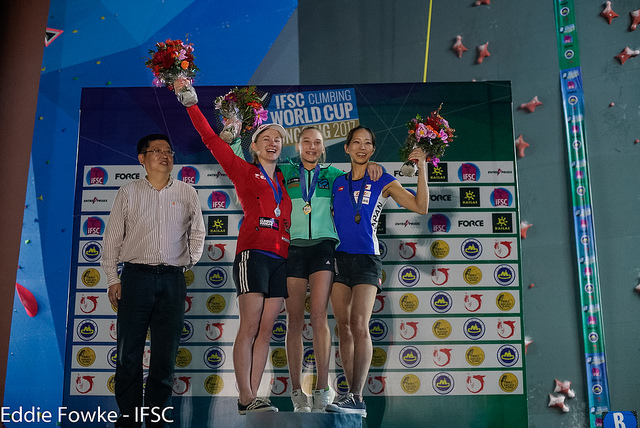 Thousands watched the free online streaming of the IFSC World Cup this weekend in
Chongqing, China, after the IFSC went back on their decision to charge for the service. This was also a historical broadcast in that it was the first IFSC World
Cup to be streamed live on YouTube from China.

Garnbret was joined on the podium by reigning World Cup Champion Shauna Coxsey (GBR) in second and Japan’s Aikyo Noguchi in third, while Tomoa Narasaki
of Japan placed second in the Men’s event, followed by Alexsei Rubstov of Russia, who took Gold in the last World Cup round in Meiringen, in third.

In an excellent display of competition climbing, Garnbret flashed every problem in Qualifiers, entering the Semi Finals in first place. She continued this
performance by topping all four problems in the Semi Finals and then was the only athlete to top all four Final’s problems, earning her well-deserved
Gold medal. Coxsey also climbing beautifully throughout the competition and topped three problems in the Final, including a flash of W4. Noguchi also
topped three of the Final’s problems. 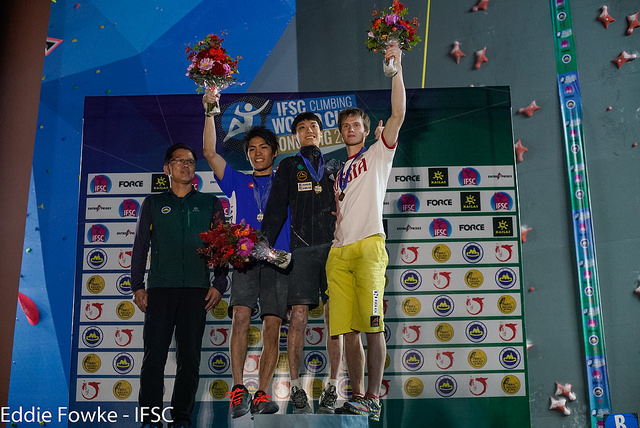 In the men’s finals Chon was unrivalled as the only competitor to top all four problems, including
the tricky M3 slab, which was not surmounted by any other climber. Narasaki and Rubstov both flashed the first two problems in the Final and reached
the bonus hold on the powerful M4. Narasaki took second place based on count back.

In the Women’s Speed event, reigning champion Iuliia Kaplina of Russia took first place, and even broke her own World Record by .07 seconds with a time
of 7.46 seconds. Mariia Krasavina (RUS) took 2nd place and Alla Marenych (UKR) took 3rd.

This was the first of two Bouldering and Speed World Cup rounds to take place in China, the second will take place in Nanjing next weekend.

Team U.S.A. did not compete in this event but will be present at the Nanjing round next weekend.