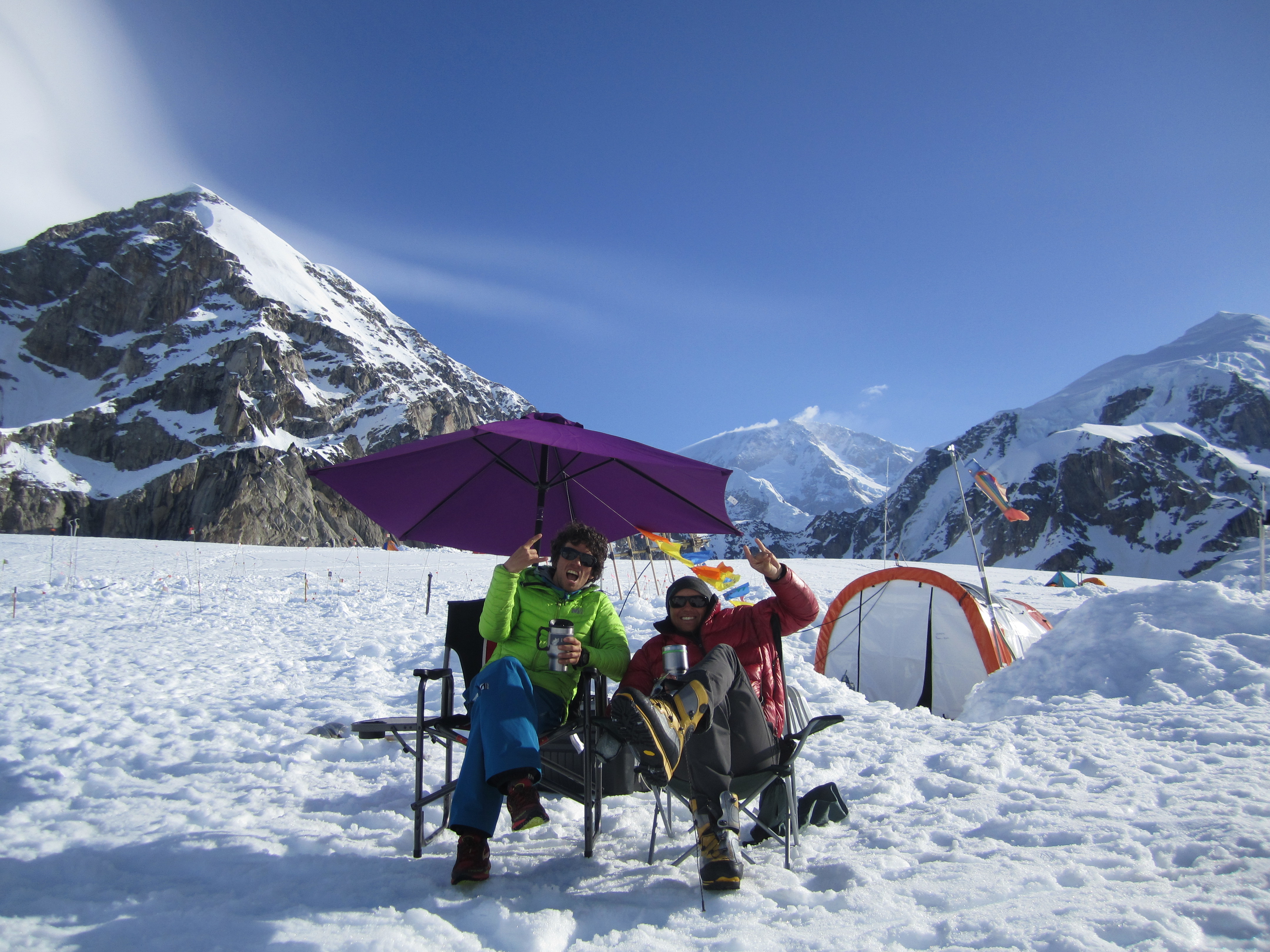 This past May, Andres Marin and I made a short, but exhilarating expedition in to the Alaska Range. Our goal was to explore the East Fork of the Kahiltna Glacier for new routes. Despite its immediate proximity from Kahiltna Base Camp in the Southeast Fork, the East Fork receives little traffic. Based off of several photographs Andres had seen from friends who had previously ventured into the area, we decided to take a look. After much reconnoitering, we found a hidden gem that we had initially overlooked.

Unseasonably warm temperatures in the Alaska Range made climbing on nearly every aspect at lower elevations questionable. Regardless, we skied past the south faces of East and West Kahiltna Peaks, Vince Andreson and Barry Blanchard established several lines in the early 2000s. South facing routes were more or less out of the question, as every steep mixed line was seemingly bare; only defined by traces of slush avalanches and rock fall. Further up glacier, we scouted Mount Andrews, which is a prominent sub peak on Denali’s South Buttress. Going Monk, established by Kelly Cordes and Jonny Copp, is the mountain’s only line, but contains well over 4,000-feet of relief. Other magnificent lines were just barely threatened by one of several large seracs that adorn the upper wall.

We moved further up the glacier, but the conditions were the same. Feeling slightly disheartened, we skied back to our camp under the East Ridge col of Mount Francis. Temperatures were so warm that it didn’t even freeze at night. As we weighed our next move, we looked at the snaking hoards undulating up the well-worn trail of Denali’s West Buttress. Suddenly, I found myself tracing a line up a rocky buttress on the north side of Mount Francis. Although significantly shorter than any line we were hoping to climb, it seemed like a worthy consolation and a fun day out.

The next morning, we left at the leisurely hour of 11 a.m. and began climbing a deep wallow in slush over the schrund and enjoyed some simul-climbing up a right-trending snow ledge lead to a weakness in the first steep rock band. Andres lead an amazing 65 meter pitch up a steep corner and then up a wide left-facing chimney that required an array of techniques, including placing both feet against the opposite wall and moving into an almost completely horizontal body position.

Almost every pitch contained some kind of technical 5-to-15-meter crux section of engaging M5/6 climbing. Just as one option closed, another opened. As the sun set, we found ourselves near the top, but the climbing remained stiff. After about nine hours, we topped out on the pointed buttress. Several rappels on rock gear led to an easy descent down an adjacent ice gully where, after eleven 65-meter rappels we crossed the schrund. 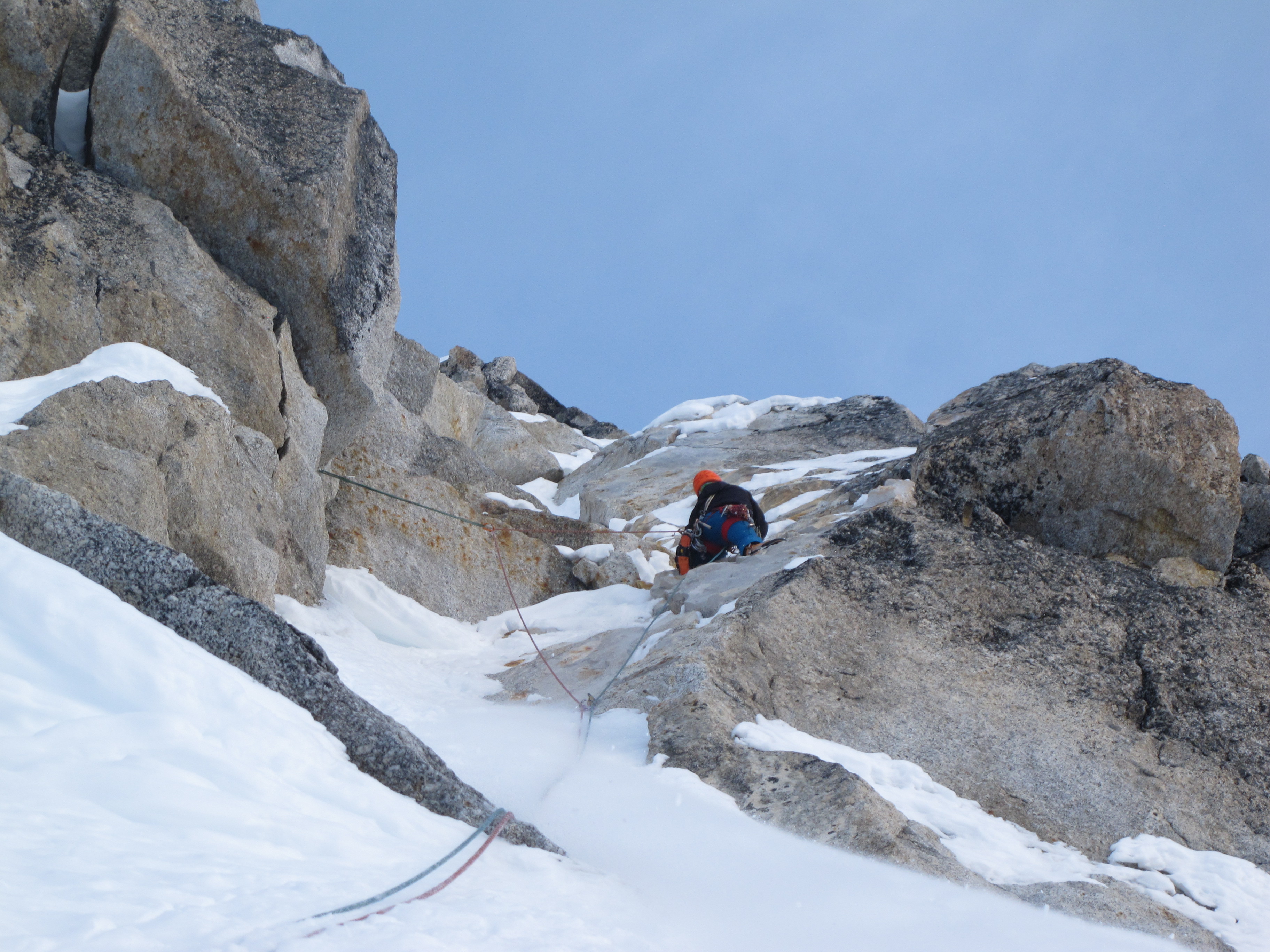 The next morning we skied back to Kahiltna base camp and concluded that conditions were not ideal for further pursuits. Regardless, we both left with a feeling of joy and accomplishment. While we were unable to attempt any of the intimidating and challenging 4000-foot climbs we had planned on, we discovered that big things come in small packages. Our new route Scratch and Sniff (IV/V M6 5.8 1200′) on Stubbs’ Buttress (named in honor of Talkeetna’s world famous cat mayor) contained twelve pitches of incredible climbing on a previously untouched feature, less than two hours from Kahilta Base Camp.

Andres and I have been friends for the better part of a decade. We first met in 2005 while working on Mount Rainier. In the wake of the Liberty Ridge tragedy (where we both lost our good friend Eitan Greene), we felt truly satisfied to share a wonderful day on a steep face together, relishing the exquisite climbing almost as much as the reaffirmed friendship.