America’s Tommy Caldwell and Josh Wharton and Canada’s Sonnie Trotter established You Cannoli Die Once (5.12d/5.13a) on June 9 while vacationing with their families at San Vito Lo Capo in Sicily, Italy.

This six-pitch route wanders up the left side of the town’s most famous landmark, the cliff of Monte Monaco. The climb is on compact stone with great friction and varied moves on a multitude of tufas and pockets.

Trotter tells Rock and Ice, “Bolting and climbing a new route is definitely in my blood, but I haven’t always had the opportunity to equip something in a foreign country. It seems like a really nice thing to do, to offer something back when you can. I hope people will enjoy it.”

You Cannoli Die Once, bolted over two days of the climbers’ two-and-a-half week stay, shares its first four bolts with Lingua Pura (5.12d), established by Albert Leichtfried. The new line then traverses left.

Sadly, the name You Cannoli Die Once does not have a great back story. No. It’s just fun to say.

“We had a few good name choices, but nothing that jumped out, so I decided to ask for ideas from the climbing community,” Trotter wrote in an e-mail. “We got some hilarious feedback, as well as some great more serious names too, but in the end we all agreed that You Cannoli Die Once made us smile or laugh every time we said it, so that’s how we decided.”

The 5.12d/5.13a route wasn’t very challenging for these longtime top climbers. They all managed to climb every pitch, even the two pumpy crux pitches, first try. Except Trotter: He did the third pitch on his second try because a tufa broke. We’ll count it.

As for other routes climbed during their stay, Trotter claims they did “nothing worth mentioning.” All of the climbers simply took advantage of the sport-climbing paradise that is Sicily during their vacation. 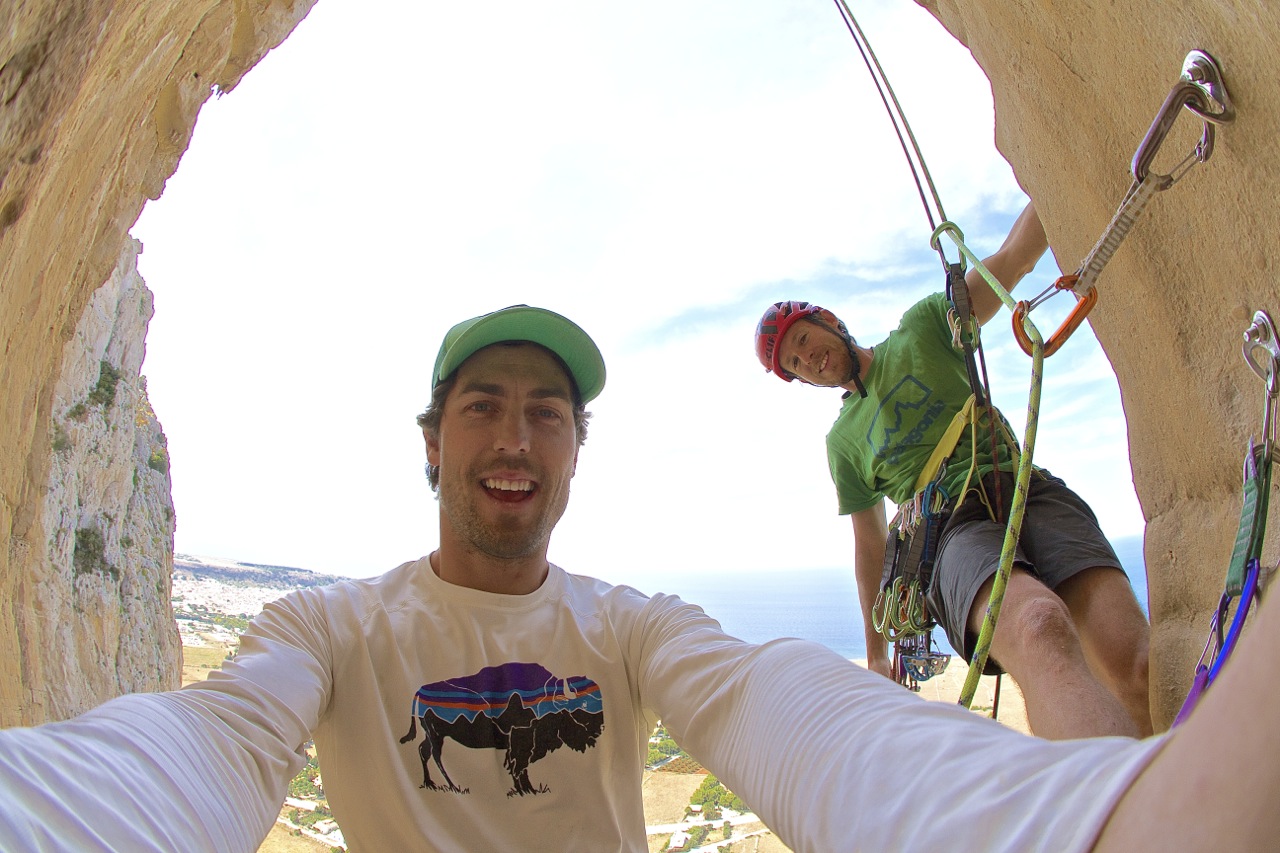 “We mostly just clipped a lot of bolts and tried to get up whatever looked like the best lines,” Trotter wrote.

The three and their wives all have small children, and all stayed together in the same house. The whole crew has moved on to Switzerland now.

“It was a bit crazy at times ha ha ha,” Trotter wrote. “San Vito is a great hang for families with sandy beaches, short approaches, and beautiful weather.”

You Cannoli Die Once allowed Trotter, a 17-year new-route “addict,” yet another fix. Among many other routes by the members of this trio, Trotter and Caldwell established The Shining, a 15-pitch 5.13+ on the Diamond Face of Mount Louis in Alberta, Canada, in August 2011(see Rock and Ice 199 for Trotter’s feature article).