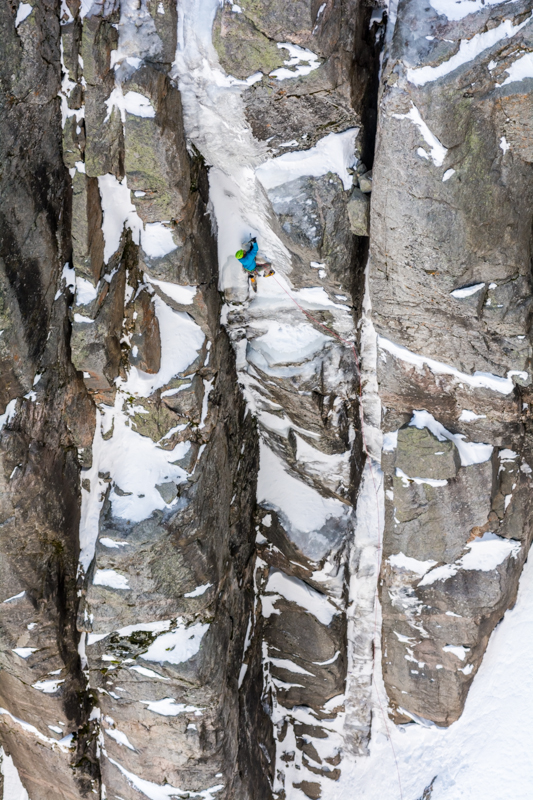 Photo by Dan Gambino
The good fall alpine ice conditions on the Front Range are continuing to make for some notable first ascents in ice and mixed climbing.

Black and White was the first line to go down. Taylor Brown, Collett’s partner for the climb, had scoped the route’s third and final pitch earlier in the season before the road to Mt. Evans had closed, and though the climbers were unsure of the line’s difficulty, they rapped in to give it a go anyway.

“It turned out,” wrote Collett to Rock and Ice, “that the first pitch had an M6ish roof/chockstone encounter. This led to easier terrain on the second pitch followed by a steep smear of ice on the last pitch ending below a wee M5 roof.”

A week after sending Black and White, Collett returned to Mt. Evans with Will Mayo, a fellow Colorado-based climber, to complete Silhouette (WI6+, M9). Collett detailed the story of this committing route in his e-mail to Rock and Ice.

“During the week previous to Black and White, Will Mayo, Josh Finkelstein and I had climbed the Smear of Fear [a classic Longs Peak ice line (WI5, M6 R)]. On that day, Will mentioned that he was in the market for something steep and wild. From Black and White … I couldn’t help looking at the enticing icicles of Silhouette and thinking that they were probably the sort of things that he was talking about. So we went back and did them. There is a bit of an approach pitch to a stance below the hangers. The crux pitch was around 100 feet long, climbing overhanging rock onto free hanging icicles and then finishing up some steep, strenuous ice to a belay. Thankfully, the final pitch was a bit easier-5+ or so.” 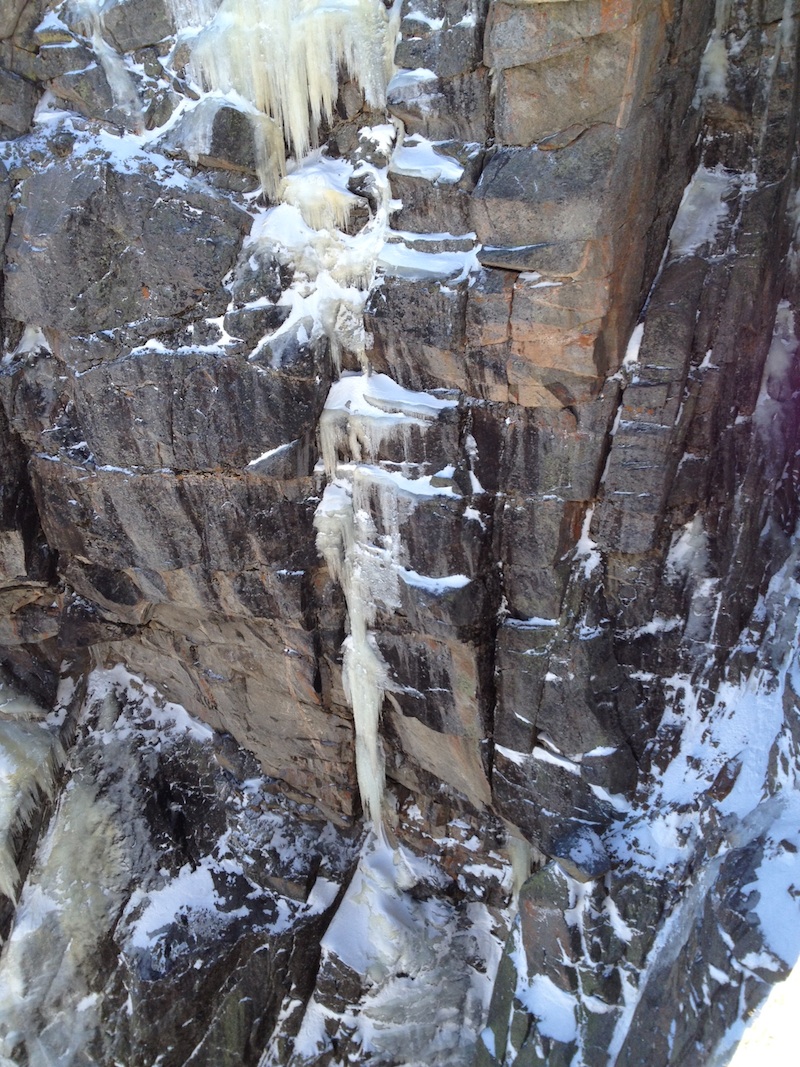 Mayo gave Rock and Ice his take on the climb as well:

“Silhouette was perhaps my best effort to date in the traditional mixed game. It was the apotheosis of all that I value about this sport and the culmination of the dozens of traditional mixed climbs that I have established over the years,” he wrote in an e-mail.

He continued on to describe his headspace during the onsight of Silhouette:

“[It] was definitely my proudest onsight to date and was one of those rare moments when one manages the gear and the fear on terrain that is right at the upper limits of one’s onsight capacity and somehow everything comes together, but only just. Such moments are the experiences that I believe are the prime motivator for many climbers. It’s the essence of the sport and perhaps the reason why we all devote so much time and energy to these climbing games. It’s these types of experiences that we treasure most.”

And those weren’t the only first ascents on Mt. Evans this fall, either. According to Collett, two other climbers, Doug Shepherd and Scott Bennett, also established Monochrome (WI4, M5), climbed in the period between the first ascents of Black and White and Silhouette.

In his e-mail, Collett noted that ice climbing at Mt. Evans first began in the 1980s when Mike Bearzi, a veteran Himalayan climber who tragically died in Tibet in 2002, and partners ascended a few ice routes on the Black Wall. Though it’s not known what routes they actually climbed, Bearzi and his fellow climbers arrived at these climbs via a 10 mile winter approach through the Chicago Lakes area, the traditional launching point for Black Wall climbs in the summer when the road is open. This year’s climbers, though, opted to use a different approach from Guanella Pass:

“Not being as hardcore, talented, or motivated as Bearzi, the 10 mile approach seemed a bit much. Taylor suggested going in from Guanella Pass. This takes about two hours … What is strange about the location is that you do a long approach and then rap into the routes down the summer rap line for the left side of the Black Wall. It felt kind of committing since we had no idea how hard it would be,” Collett told Rock and Ice.

The ascents at Mt. Evans came alongside other first ice ascents as well. In mid-October, Topher Donahue and Kevin Cooper climbed a new route on the Diamond. See the Rock and Ice article here for more information.

As for the remainder of the season, now seems to be the time for high alpine ice climbing. 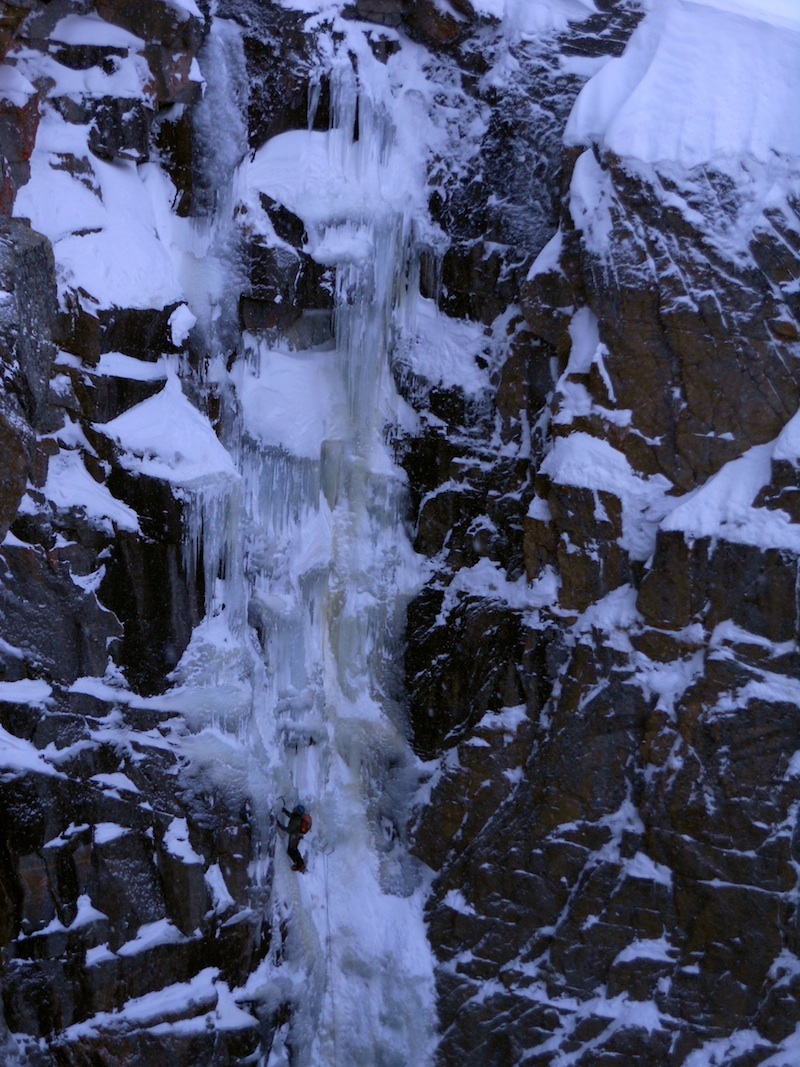 “This fall has been great from an ice perspective in part due to all the moisture that we had in September and in part due to the consistent cool temps we have had on the Front Range. The ground is still somewhat saturated which should help some as we head into winter, but many of the high altitude smears that formed are starting to dry out and will not stay good for much longer. The good ice climbing on this side of the state really only occurs in the spring and fall. I don’t know whether our wet autumn will have any effect on the spring season,” he wrote in his e-mail to Rock and Ice.

Even if the high-altitude smears are nearing their end, there’s still plenty to look forward to for ice climbers across Colorado. The Ouray Ice Park opens December 14 as long as conditions allow and the Ouray Ice Festival will take place from January 9-12, 2014. Get ready for what is shaping up to be a year of fat ice and solid conditions.

UPDATE: Taylor Brown recently contacted Rock and Ice with news of even more first ascents besides the three listed above. In fact, there are three more possible FA’s listed on the CO Ice and Mixed section of Mountain Project, the most difficult being Taylor Brown and Jessica Young’s Ursa Major (WI 3-4 PG13 M4+, 900 feet). Other first ascents were Ruckus (M4+, PG13) and M2 (M2+ PG13) by Chris Snobeck, J. Antin, and J. Parkinson, and Yukon Jack (WI 3, M3-4) by Taylor Brown and Alex Banas.
Doable ice climbs are there for the taking. Get out there before the ice dries out!