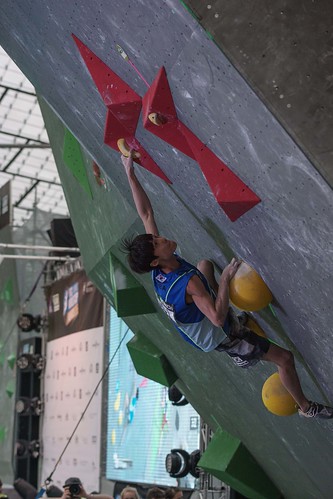 Competitions are broken in to three age groups for each gender: Youth B (ages 14-15), Youth A (ages 16-17), and Junior (ages 18-19). Junior climbers are also eligible for the IFSC World Cup circuit, depending on their performance in qualifying rounds. This accounts for young climbers like Jongwon Chon and Jessica Pilz competing in both tours.

USA’s Margo Hayes performed strongly in the Female Youth A category, claiming silver with two flashes on the finals problems. Janja Garnbret secured a gold medal for the Slovenian team by topping out three of the final boulders, the only Female Youth A competitor to do so.

Japan dominated the Male Youth categories, winning two silvers and a gold medal between the Youth A and B competitions. USA’s Shawn Raboutou (brother of Brooke Raboutou) barely missed the podium in the Male Youth B final, giving up the bronze to France’s Hugo Parmentier. Parmentier completed two problems in four attempts; Raboutou, in five.

Perhaps the most predictable performance came from Korea’s Jongwon Chon, age 19. Fresh from his gold medal victory in the Bouldering World Cup Championships, Chon edged out France’s Nicolas Pelorson by one attempt in the Junior age category and took his second first-place title of the season.