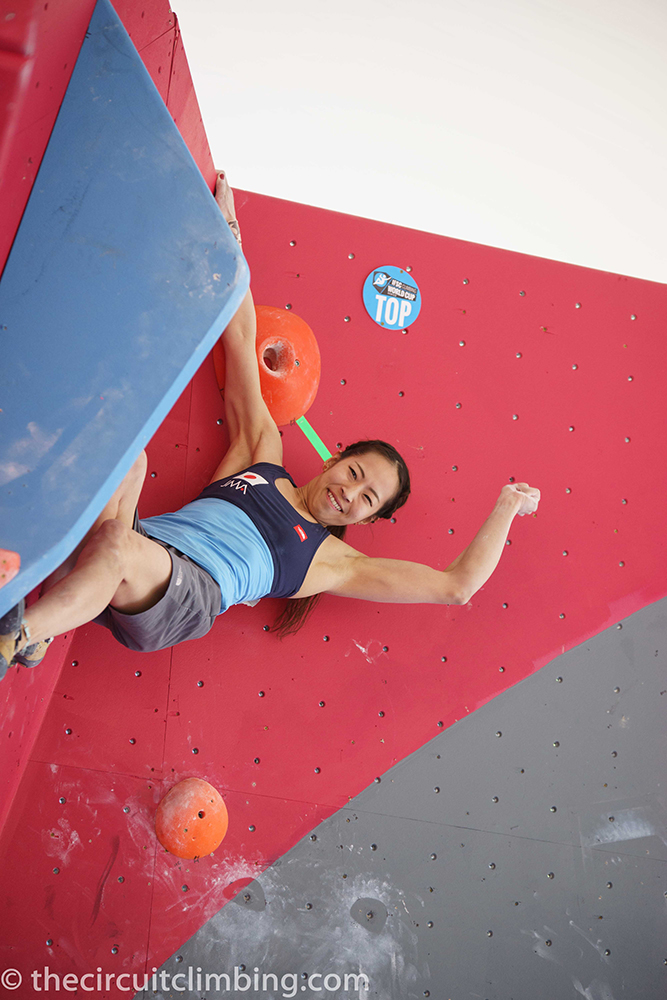 Ah, early rounds. If first rounds were last rounds, today Alex Puccio, the only woman to flash all boulder problems in the qualifier at the GoPro Mountain Games Bouldering World Cup, would have won. An emergent 19-year-old American, Michael O’Rourke, would be top 10, and Vasya Vorotnikov, a veteran American climber, would be ninth.

But those aren’t the rounds that count. At this June 6 to 7 event in Vail, Colorado, a well-deserved victory among women went to Japan’s Akiyo Noguchi, who had just won at the World Cup in Toronto last weekend, and who flashed all but one of the finals problems. Also ruling, the only male to top all four finals problems, was Russia’s Dmitri Sharafutdinov, who took first at Vail last year, and is a three-time overall World Cup winner. The men’s win in Toronto had gone to Guillaume Glairon Mondet, France, who was a strong second here in Vail.

A new star is born in Fanny Gibert of France, in second place after solid and cool-headed climbing, making hard moves look easy, while the redoubtable Anna Stohr of Austria, who won this event the last three years and has been overall World Cup champion four times, was third; and a new American star was the world-class Megan Mascarenas, 16, of Colorado Springs, who finished fourth but had entered the finals round sitting as high as second. Possibly the cutest thing at the whole comp were all the little kids screaming for her. Sean McColl, who led the standings after semis (those early rounds again) was third both in Vail and in his home country, Canada, the weekend before.

Noguchi , it should be noted, is also a top lead-comp climber. She hadn’t won a bouldering event since 2012 but was reliably up there, with five second places and four thirds, and she is certainly rolling after her North American tour.

In semis, Puccio didn’t complete tricky problem number 2; nor did Shauna Coxsey of the UK, who has finished the last three comps 1-1-2. Coxsey eked into the finals in sixth, and Puccio, who has won this event in 2009 (gaining 11 podiums since), after squeaking into finals herself that time, settled for 10th.

These things are decided by the tiny-tiniest margins and decisions: for example, if Angie Payne had finished the last problem (and she was close) she’d have been in finals, as per last year; she still finished strong in eighth. If Puccio, despite missing number 2, had flashed number 4 instead of teetering off the lower move, she’d be in. And if Coxsey had flashed 4, instead of being called off it for a false start (a climber’s limbs must be placed on certain taped holds to begin), Puccio would have had no chance at finals, flash or not.

In the women’s field, a pack of about five, led by Coxsey, who arrived in Vail in the lead in the overall rankings, are consistent finalists. The others are Noguchi, Anna Stohr, Juliane Wurm (GER) and Puccio, who placed third in Toronto and entered Vail fifth in the overall standings. Then again, Wurm too was out of finals in Vail, and Stohr had been out in Toronto. 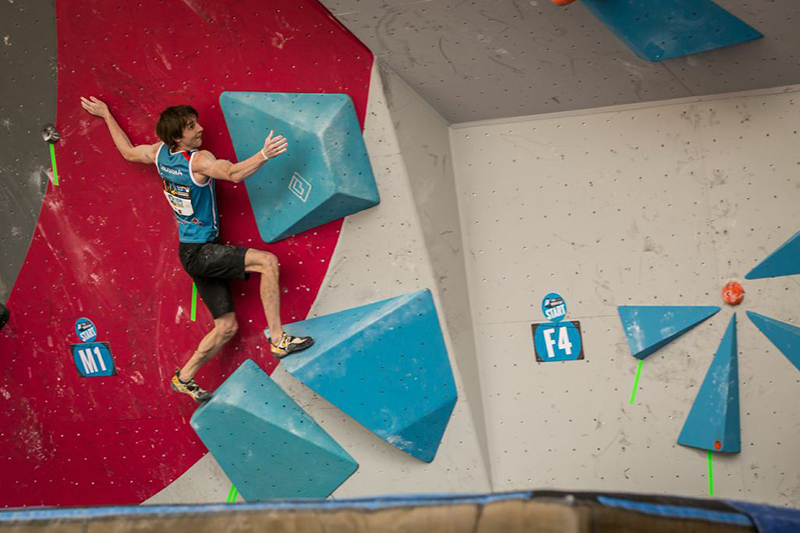 In the men’s field, you have a dozen-plus absolutely top contenders, and indeed the big surprise of the event would be Jan Hojer (GER), who entered the event leading the World Cup rankings, but was just out of finals in seventh.

The event drew 48 men and 42 women to the quarterfinal, from which six American men and seven women made it to the next round. Carlo Traversi of Boulder reached the top 10 in 10th.

McColl had one of the most exciting moments of the event, a buzzer beater to beat all. Three years ago he missed finals here in Vail when he matched on a top hold just after timing out. Today he climbed men’s number 2 glancing three times at the time clock off to the side.

“I saw 17 seconds and thought, plenty of time,” he said afterward. Then he matched on a pinch that was harder and took him longer than he expected. “Then I saw seven seconds.” He booked it, matching the top hold with two seconds left. Of that past finish after the buzzer, he said with a laugh, “I should have climbed faster.”

Managing the event were the International Federation of Sport Climbing and USA Climbing. Chris Danielson, Matthias Woitzuck, Martin Hammerer, Jeremy Hardin and Jonny Hork as coursesetters, created intriguing problems that baffled some and suited others, with visually spectacular flying dynos and unbelievable upside-down pinches and compression moves. Forerunning was by Flannery Shay-Nemirow and Garrett Gregor.

The Mountain Games comp, while protected by a massive metal structure, is at an outdoor venue, usually sun-drenched and set among green mountains, with a festival vibe. 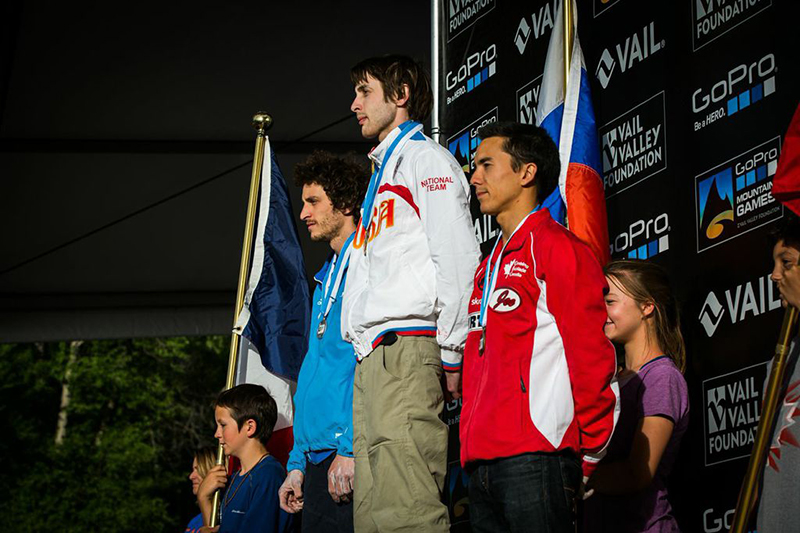 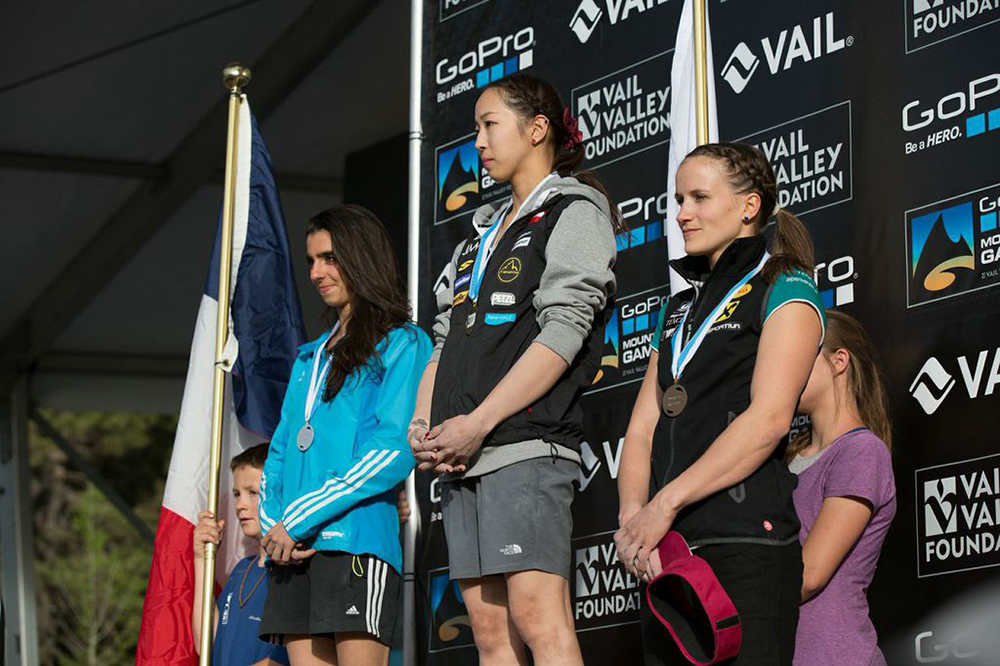