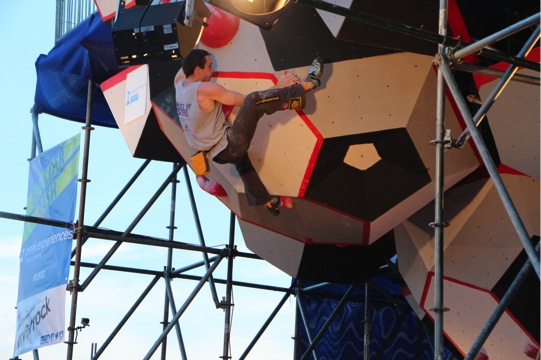 Spectators and participants amassed in numbers near 100,000 in Richmond, Virginia this year for the seventh annual Dominion Riverrock Festival—the largest outdoor sports and music festival in the United States.

Over the three-day weekend, some of the country’s top boulders went head to head on the futuristic, overhanging “bouldering cages” in the Boulder Bash and Speed Bouldering competitions.

For the difficulty comp, Vasya Vorotnikov captured first place for the second straight year on the men’s side, while Claire Bresnan took the women’s title.

From there, the top 15 men and women moved on to Semifinals on Saturday. Afterwards, the top 10 men and eight women duked it out on a single boulder problem for Finals—see results below:

Following the Boulder Bash, the Speed Comp was held on Sunday, with qualifying rounds on Sunday afternoon and the intense finals on Sunday evening. Results:

Riverrock will return to Brown’s Island and Historic Tredegar next year on May 20-22.

Check back for video highlights