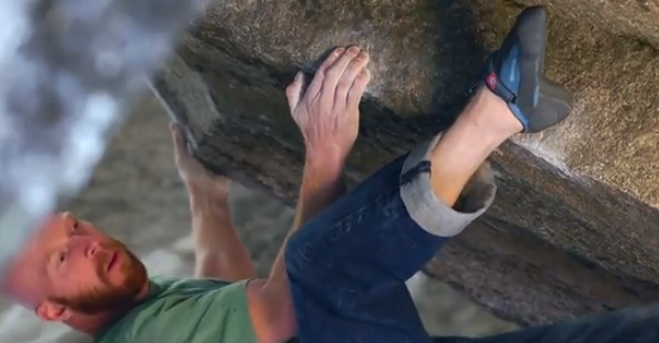 “The only thing I’m fighting is me.”

So says Chris Schulte in this new Louder Than 11 film (see below) about hard bouldering in the deep and labyrinthine cleft of the Ice Caves, Independence Pass, Colorado. He drops into the grotto from the forest above, after trekking there hilariously mule-loaded with crash pads.

The film is also a story of what to Schulte, 35, a prolific first ascentionist with hundreds of FAs of difficulty up to some unrepeated potential V14s, is an often solitary pursuit. Schulte, originally from Texas, learned to climb as a teenager in Durango and now lives in Boulder, establishing routes across Colorado and in Bishop and Hueco, describes the hyper “sensitive state… this really high vibration” of difficult bouldering, in which micro adjustments make every difference and the presence of others can be a distraction.

Rock and Ice reached Schulte in Europe, where he had fled foul weather in Fontainebleau, France, for blue skies and more bouldering in Ticino, Switzerland.

“Ticino is awesome,” he reports. “So glad to be here now, there’s so much I want to try and conditions are great!” Asked what he has on the agenda, he replies: “I’ve been before in hot weather, so there are a few things I want to do that I came close to before: The Dagger, Confessions, General Disarray, Amber, Boogalagga … to name a few. I’ll go back to Font in a couple weeks if the weather clears.

“I’ve spent a lot of time in Font, and what’s left there for me right now is The Big Island, which is why I’ve returned this year. I had one great session on it, then I got the flu and it started into a six-day snowstorm. The forest is soaked and frozen, but I’ll be back.”

Schulte has done most of his Indy Pass bouldering solo, though also climbed there with a “dedicated crew” of locals, as well as Jackie Hueftle and Ben Spannuth, who have their own FAs there, and some friends from Durango. Jon Glassberg of Louder Than 11 put up a nice v8 and a huge dyno while there for the filming.

The film shows Schulte’s wild-looking possible V13 The Crucible, which is apparently unrepeated: “No one else has tried it to my knowledge,” he tells us.

“The hardest thing was to commit to a sequence,” he comments of the problem. “I was very close to a different method, so I spent the bulk of the time trying that method. When I finally switched to a method I’d tried briefly a season or two back, but abandoned because it hurt my finger, I did the move right away and the problem immediately after. That’s how it goes with new routes, and even more so with climbing solo. Tunnel vision strikes often.

“I never graded the route. It could be V11 for all I know. But it seemed harder that other V12s I’ve done, and about the same as Don’t Get Too Greedy in RMNP, which gets V13. You just gotta guess, and in this case, I guessed by comparison. I don’t really care. I just wanted to climb that amazing line.”