Rumbling Bald, a climbing area in western North Carolina, is caught in the center of a wildfire that is currently ravaging
the surrounding landscape. The fire, located on state park land in the Party Rock area of Lake Lure, North Carolina, began on November 5.

The fire engulfing the picturesque cliff is just one of a series of conflagrations that are sweeping the southeastern U.S. A lengthy drought left the region
at far greater risk for wildfires than normal this year. Along with North Carolina, both Kentucky and Tennessee are beset with serious fires. 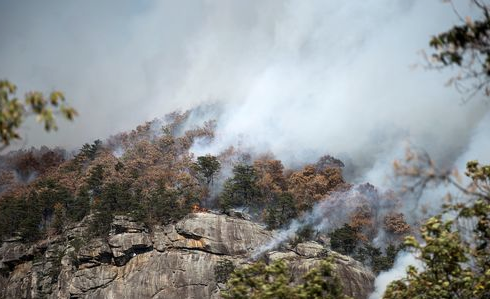 Rumbling Bald is a popular climbing destinations on the East Coast, offering climbs of all styles—trad, sport, and bouldering—on high-quality
gneiss. Following a brief closure in the 1990s due to access issues, the area has recently become a famous bouldering area, and is known for its playful
names on the popular Cereal Buttress, such as Fruit Loops (5.7+), Shredded Wheat (5.11a) and Whiskey for Breakfast (5.10d).
The climactic scene of the 1992 Daniel Day-Lewis-starrer The Last of the Mohicans was filmed in Chimney Rock State Park.

When asked if the fire was actually on or near the climbs at Rumbling Bald, Sean Coburn, an attorney and local North Carolina climber, told Rock and Ice,
“Yes. Above. Below. And on climbs. Both sides of mountain. [We’re] trying to figure out if fire affects bolts. And [we’re] assuming most top tree anchors
will need [replacing] soon.”

The extent of the damage to climbing hardware is unknown at present, and will likely remain so for the near future. Once the fires have been brought under
control, and once Rumbling Bald is open to climbing again, climbers should be wary of fixed anchors and gear, bolts included. The intense heats created
by forest fires can have wide-ranging effects on exfoliation and other processes of erosion, as well—another reason that extra caution should
be taken. Climbers should check the Carolina Climbers’ Coalition website for damage reports and updates
on the closure of Rumbling Bald before entering the area. (Conditions across the southeastern U.S. remain dry—all recreationalists should be
particularly careful lighting any campfires and abide by any local campfire/burn bans in place.)

The New York Times reports that many of the fires across the
Southeast are currently being investigated as acts of arson. Campfire and burn bans have been instituted in dozens of counties in several states. While
more than 5,000 firefighters work to contain the various blazes, the effects of the fires are already being felt across a wide swath of the region.