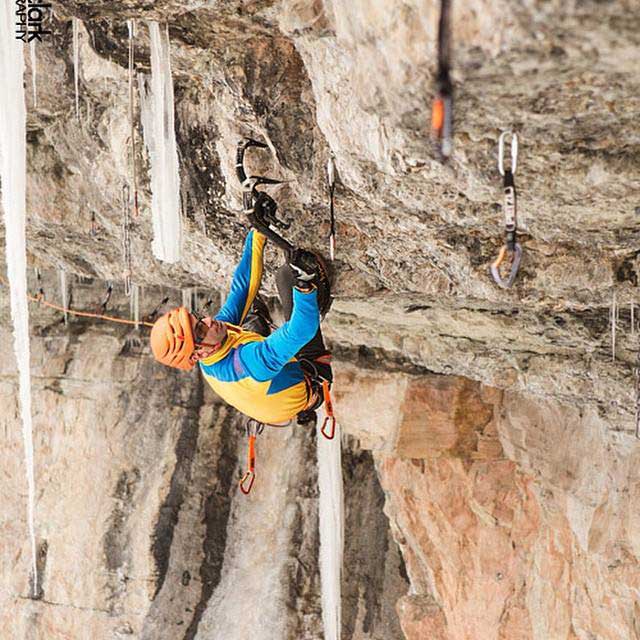 “I have long desired to make the arduous approach to the remote Jedi Mind Tricks, but somehow I never found the time nor the motivation,” Mayo told Rock and Ice. “Friends kept asking me, ‘Have you done Jedi?’

First climbed by Ryan Nelson and Jared Ogden in 2002, Jedi Mind Tricks sits in the remote God’s Cave south of Lake City, Colorado. Once Ryan Vachon climbed the route this past November, he convinced Mayo to make the effort.

“He raved about the route in a spectacular location on beautiful pocketed volcanic rock,” says Mayo. “I was motivated by the healthy and friendly competition between me and Ryan and simply to see for myself, ‘Is it really the hardest route around?'”

On December 3, Mayo made the trek to God’s Cave, and aided by Vachon’s tick-marks, he quickly dialed-in the moves on his first try.

“Then, everything just came together and I managed to pull it off second try,” says Mayo.

Though Jedi Mind Tricks has been suggested to be M14 when climbed in the now modern style of no heal-spurs, Mayo believes that the route doesn’t quite stack up to the other M14’s of the world.

“I was pumped, no doubt about it, but I just know that I am not strong enough to do an M14 second try,” says Mayo. “Ryan and I agree, it’s M13, and a mega-classic M13 at that. It requires endurance, for sure, but not to the degree that The Mustang or Ironman (M14+ in Eptigen, Switzerland).”

Five days after sending Jedi Mind Tricks, Mayo decided to put his fitness to the test and try his two-year project, The Mustang, in the Rigid Designator Amphitheater of East Vail.

“The Mustang is essentially a link-up of Stratofortress (M13+) and The Lightning (M13+),” says Mayo. “I made the first ascents of all three of these routes last year. However, when I did The Mustang first, I was able to stem to The Fang (WI 5) and recover throughly mid-route. I rated it M14- at the time, knowing that I could up the ante by doing it without the stem, before The Fang forms.”

On December 8, Mayo cranked The Mustang without using the stem, claiming his hardest mixed-climbing redpoint of his career.

“I have developed the kind of power-endurance that I have been lacking and it is really paying off mixed climbing,” says Mayo. “It seems strange, but I can’t explain it otherwise.”

Mayo, 42, is originally from Vermont, but now calls Erie, Colorado, home. At last year’s elite mixed climbing competition in Ouray, Colorado, Mayo took third place. This year he is scheduled to compete at both Bozeman, Montana’s World Cup mixed-comp and Ouray. But Mayo’s bigger projects are in the greater ranges.

“I hope to go to Eptigen, Switzerland, if possible, to send Ironman. Also, there is a giant project in Canada that I may get to try. Otherwise, I’ll be training in the mountains with Josh Wharton and Stanislav Vrba for an attempt at the unclimbed North Face of the Ogre II in Pakistan next summer.