William Bosi, 17, clipped the chains on Rainshadow in Malham Cove to become the youngest Brit ever to
climb 5.14d/9a.

His is the sixth ascent of Rainshadow, established by Steve McClure in 2012 after two years of hard work. Adam Ondra, Jordan Buys,
Ben Moon and Stu Littlefair have also sent the route. 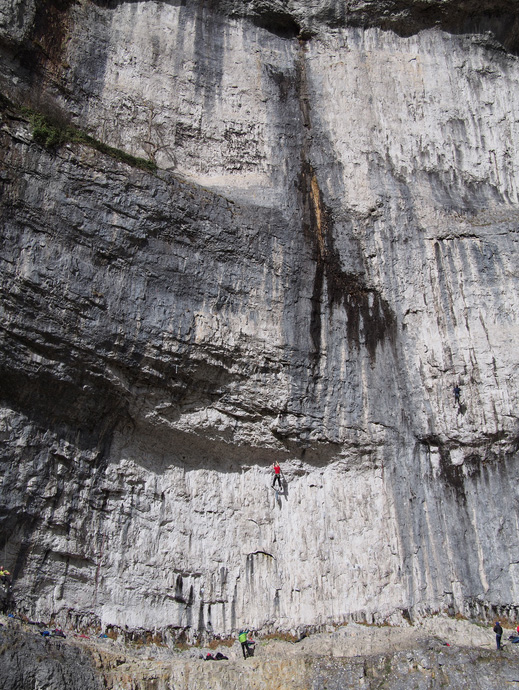 Bosi worked the route for about four days and almost succeeded on his 10th attempt, but fell five moves below the top.

He said later he had never spent so long on a climb: “The hardest route I have ever done was out in Mallorca and took about two days of work,” he told
UKClimbing. “That was only 8c so this is a bit of a step up, over double
the time I’ve ever spent on a route!” He completed the route on May 1.

Rainshadow is one of the most coveted climbs at the steep and legendary Malham Cove, a 300-foot curved white-and-black limestone cliff in Yorkshire,
England. The route is an extension of Raindogs (5.13b/8a), adding a bulging V11/12 crux of crimps and pinches followed by a 5.13b/c headwall.

Bosi has competed for Great Britain’s Junior Bouldering team for five years. A climber since age six, he has ticked off Transformer (5.14b/8c)
in Malham, Monk Life (V14/8B+) in Northumberland, Slow Food (5.14a/8b+) in Ceuse, and Sufferance (5.13b/8a) in Dumbarton.

In 1992, Malcom Smith sent Ben Moon’s
Hubble, the first 5.14c/8c+ ever established. Smith, 18, had trained obsessively for the climb, working the moves on an indoor replica for
two years. He was the youngest Brit ever to climb 5.14c, but 24 years later, that honor now goes to William Bosi.

Check out William Bosi on the crux of Rainshadow below.