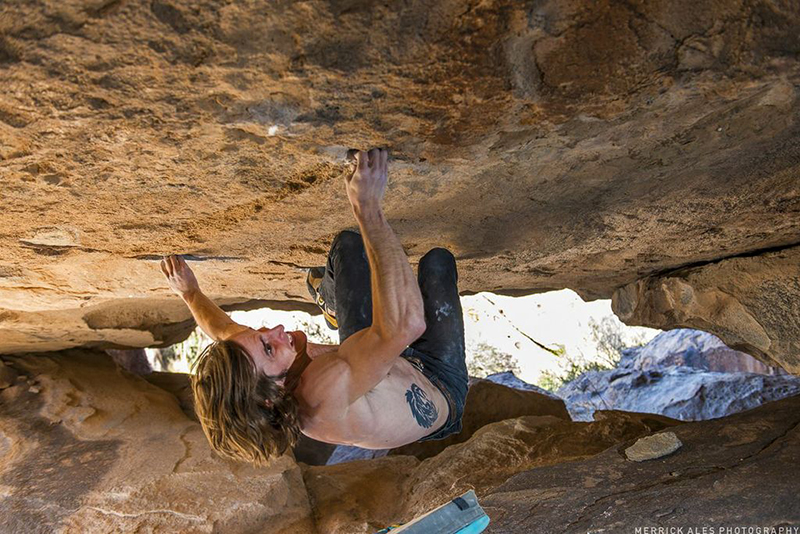 House of Doom (V14). Photo by Merrick AlesThe 21st Annual Hueco Rock Rodeo (HRR) once again lived up to its iconic status, with this year’s event having the largest turnout in Hueco history. The Hueco Tanks State Historic Site allowed 10 extra spots in the backcountry and five extra spots on North Mountain allowing for the biggest Rock Rodeo ever, with 175 competitors and a full registration a week before comp.

The fun began on Friday night with Fat Tire beer, pre-registration, the El Paso Food Truck Circus and slideshows. Local Sam Davis mesmerized the crowd with his amazing photography, showing them a unique perspective of desert life and Hueco living, as well as sharing images from his travels. Mina Leslie-Wujastyk also spoke, sharing a video and her insight on self-efficacy of climbing—some great advice before a comp. Dave Graham sped down from Colorado to show us the first cut of footage from his film project The Island 2.

A heat wave blew into El Paso, Texas, prior to the Hueco Rock Rodeo and the conditions went from good to bad quickly as the weather changed from a pleasant 50 degrees into the high 70’s and on Saturday, February 15, during the competition it was up to 80 degress. However, the athletes and guides braved it out on the rocks on this incredibly hot day and gave it their all. 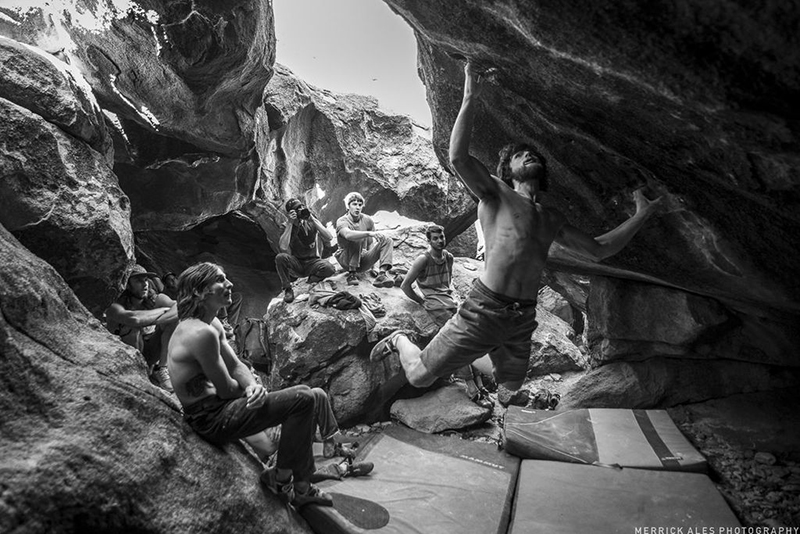 Photo by Merrick AlesSean McColl came in third with 7420 points for his top six problems, and for the day he climbed an impressive 83 V-points. McColl’s problems were, Better Build your Woodies (V11) for 1140 points, Crown Royal and Flamignon (in one go) both V13 for 1340 points, Flame V11 for 1120 points, Thrilla in Manilla (V12)—the James Litz right exit of Rumble in the Jungle—for 1280 points, Chupacabra Right (V11) for 1130 and the Full Monty (V12) for 1200 points. Paul Robinson came in fourth—his top six problems giving him 7210 points, just 210 points behind McColl with 50 Shades of Red, Nagual (V13), Better Build Your Woodies, High Scream, Scream, The Flame and Full Monty climbing 80 V-points for the day. 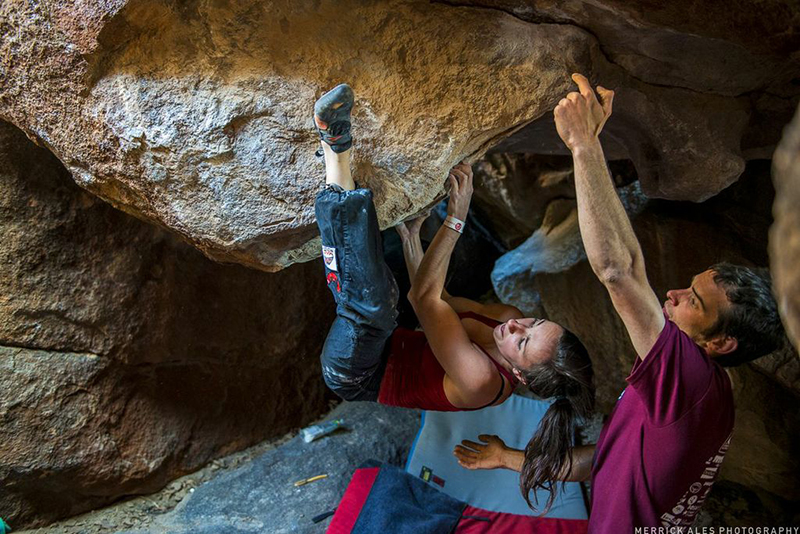 Photo by Merrick AlesIn the ladie’s open category the women ripped it up as well. Jule Wurm from Germany took first place with her top six problems adding up to 6100 points of climbing and a very impressive 83-V points for the day! Wurm climbed Better Eat Your Wheaties (V8) for 820 points, Glass Roof (V9) for 905 points, Flower Power (V10) for 1010 points, The Egg (V8) for 820 points, Funk Moe’s Extension V9 for 990, and flashed The Hand (V10) for 1050 points and Ministry of Truth (V9) for 940 points as well as Doggie Jump for 990 points. She finished up on The Flame sending the V11 in just two goes! 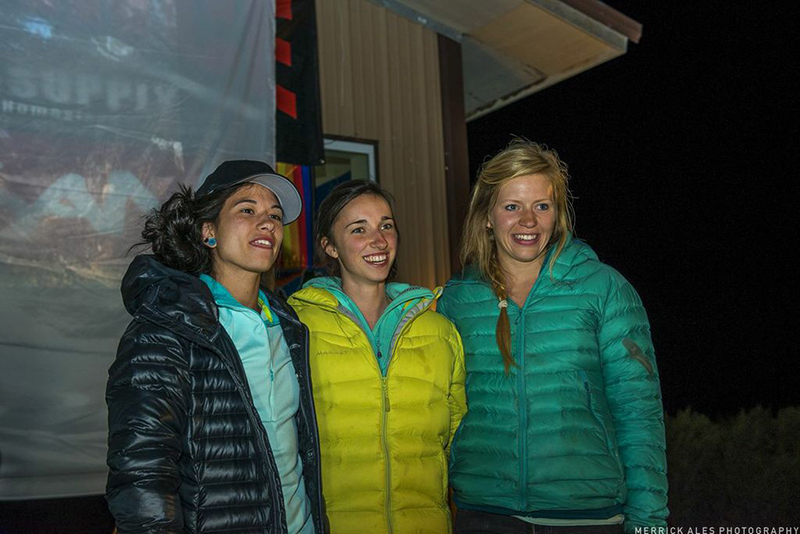 Photo by Merrick AlesMina Leslie-Wujastyk of Britain kept up with Wurm until the end. The ladies climbed with each other all day, sharing beta and encouragement. They climbed all of the same problems until the end of the day where Leslie-Wujastyk did The Flame from one move in and then was too knackered (as she would say) to send. Leslie-Wujastyk took second with 5715 points climbing 64 V-points. Leslie-Wujastyk climbed all of her climbs first go except Ministry of Truth, which went on the second go. Nina Willliams also had a great day of climbing, coming in third with her top six problems totaling 4430 climbing 43 V-points. Williams climbed with Wurm and Leslie-Wujastyk for most of the day, sending The Hand, Wheaties, The Egg, Ministry of Truth and Mr. Serious (V8) for 800 points. Jill Waters came in fourth with 3460 and 33 V-points for the day by climbing Mr. Serious, Uncut Funk, Funk Moe’s Extension and The Egg.

The weary climbers trickled back to the American Alpine Club’s Hueco Rock Ranch a little earlier than usual tuckered out from the heat. To greet them, the El Paso Food Truck Circus came back with four trucks and a cupcake truck and there was plenty of Fat Tire beer flowing to take the edge off the day. The HRR was on the local NBC and ABC channels Friday night helping to make it one of the largest Rodeo parties, drawing a lot of curious locals into Hueco Tanks. 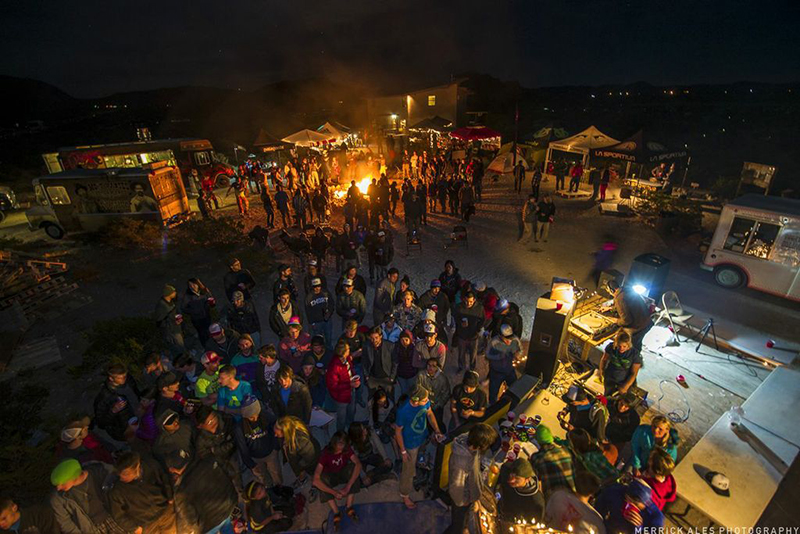 Photo by Merrick AlesWe were proud to make a donation to Hueco Tanks State Histroic Park, The Climbers of Hueco Tanks Coalition and to the Ciudad Nueva—the local youth outreach program whose kids came out to the kids comp on Sunday.

The party continued with awards and the dyno contest, where local Oscar Gaytan won the men’s comp in a sudden death battle against Conner Love, and Victoria Gezel won for the ladies. Cletus Wilcox came from Chattanooga to DJ the Rodeo and took us into the wee early hours of Sunday as the bonfire raged.

Sunday’s breakfast began at 9:00 am with Brittany Griffith and Justin Wood cooking Nutella Crepes at the Patagonia booth. People gathered for the clinics with Daniel Woods, Sean McColl, Paul Robinson, and Nick Duttle and the kids got into high gear for the youth comp. The youth comp featured some serious climbers and also beginners out to have fun and learn about climbing. Victoria Gezel took first in the advanced youth category with 1290 points, winning a climbing training camp with team ABC in Boulder, Colorado. Marissa Mur was not too far behind with 1240 points, and won a kids climbing training camp with the Spot in Boulder. Through the Rodeo Raffle we were able to raise money to waive the entrance fee of the competitors, and make a donation of cash and products to the kids of the local El Paso youth outreach program Ciudad Nueva.

For the past three years I have helped run the Hueco Rock Rodeo, and after each event I have had the privilege of saying it was the best Hueco Rock Rodeo yet. Once again the 21st Hueco Rock Rodeo gave me the opportunity to say it was the largest and most excellent rodeo to date. Without my predecessors, sponsors and volunteers it would be impossible. Thanks everyone especially 5.10, Adidas, the AAC and HTSHP. “

6. No more scores turned in

No other score cards turned in

Men most climbs not points