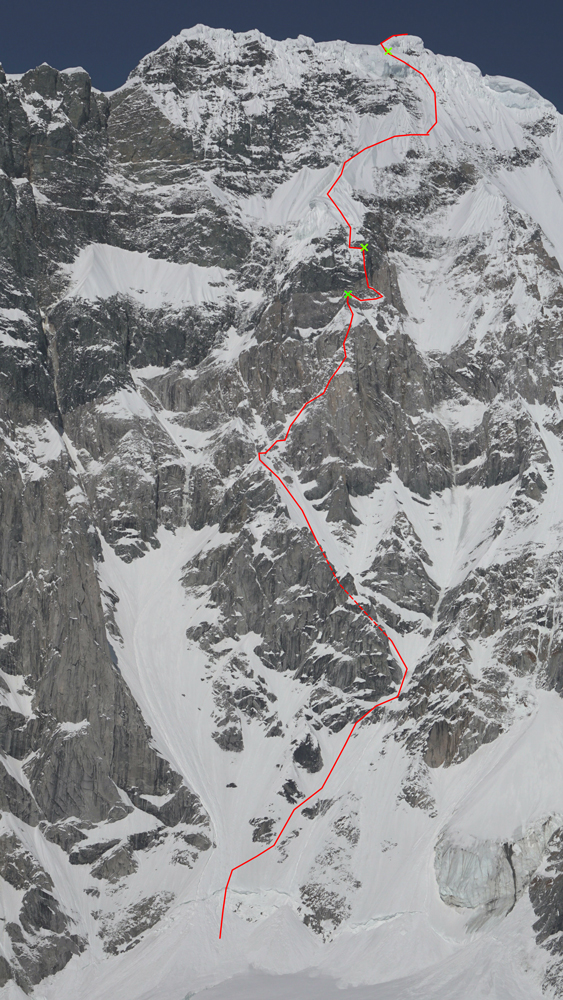 When they began their climb on May 12, at 1:00 a.m., the snowpack was firm and stable. After 2,000
feet of un-roped snow climbing, Zimmerman took the first block of leads up a mixed buttress, with several pitches of M4, M5 and M6. Wright took the
sharp end for two more pitches to gain a small snow arête where they bivied for the night at 10,500 feet. They had gained roughly 3,000 feet since
starting out that morning.

At 2:00 a.m., Wright continued his block through two pitches of increasingly loose rock before reaching a shift in rock type from granite to a black metamorphic
rock. “The granite was mostly good quality, with some loose bits,” says Zimmerman. “The black rock higher up was pretty much just unstable junk.” Wright
spent more than three hours battling up a single pitch of 5.10 X A2+, the crux of the climb.

“It was really clear between us that it would be OK if we weren’t able to climb that pitch, and had to bail from the climb,” Zimmerman says. “Chris just
tread super carefully and put out an amazing effort. I’m honestly surprised he made it!”

Aiding through the final roof, Wright knocked off several large blocks that fell, crushed a carabineer and nicked a coreshot into the rope. Luckily, the
coreshot was close to one end.

Zimmerman took the lead for the final two (more moderate) pitches of the day, at which point the team chose a small rock ledge to bivy
at 11,000 feet. The ledge, at three feet by four feet, was just big enough for both climbers to sit and melt snow for water.

“It would have been horrendous if the weather wasn’t so good,” says Zimmerman, since the ledge offered little protection from the elements. “But we were
safe from objective hazard, and were able to enjoy spectacular views of the surrounding mountain range.” The gains that day were only 500 feet, but
by far the hardest and most dangerous pitches. 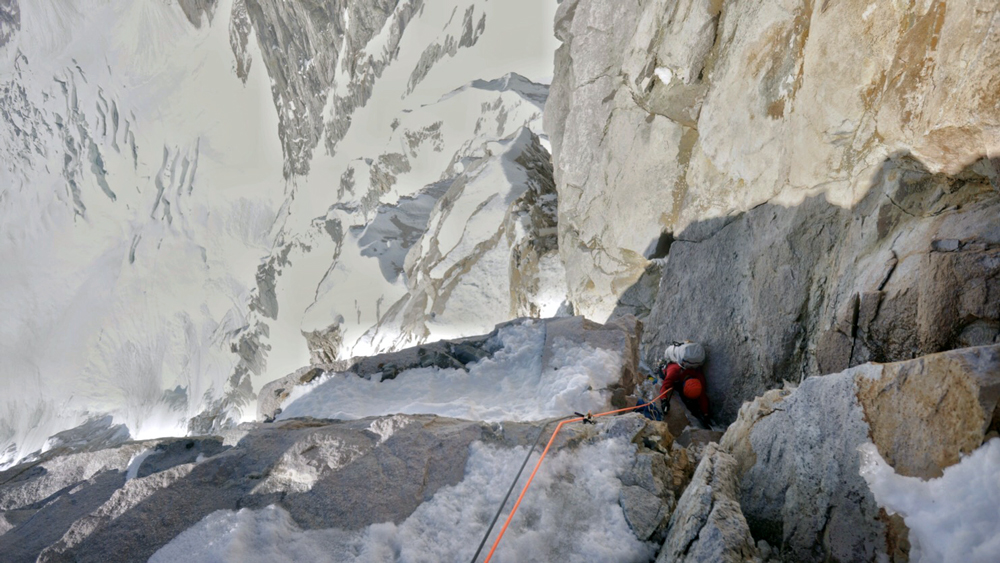 The following
morning, Zimmerman led several more pitches of easy mixed terrain before they reached a 70-degree snow and ice slope. After several hundred feet of
simul-climbing, they traversed right to an ice gully, moving quickly beneath a serac. “It was the most obvious line,” says Zimmerman. The only way
to avoid traversing beneath the serac would have involved several more technical pitches through the same junk-rock as below. “We didn’t have any interest
in that,” he says.

They reached the top of the ice gully that afternoon and bivied on a snow ledge at 13,100 feet, just below the summit. “We were bivying in a cloud, which
reduced visibility to less than 100-feet,” says Zimmerman. “If we hadn’t known that the radar was completely clear, we would have been very stressed
about that. But we knew that there wasn’t any bad weather anywhere on the radar, so we were able to sit back and enjoy the eeriness of being inside
this cloud.”

Early on May 15 they climbed the remaining 200 feet to the summit, where they were rewarded with epic sunrise views of Mt. Logan, University Peak, Mt.
Saint Elias and the Atna Peaks. 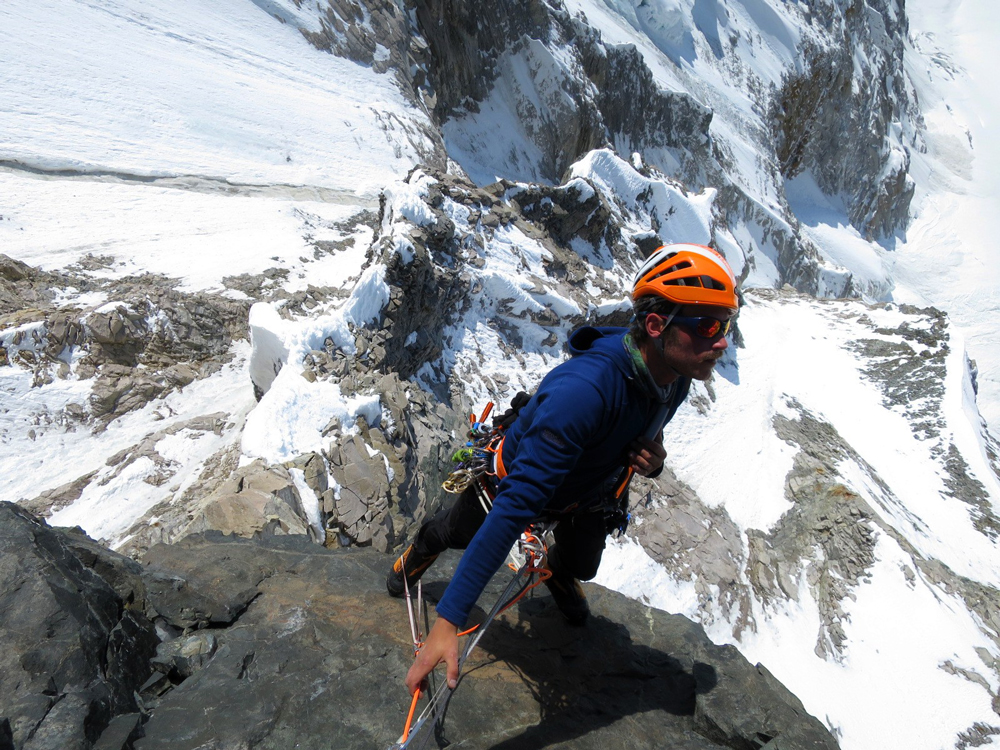 Using Claus’ beta for
the descent, the team started off with three miles of what Zimmerman refers to as “stunning, classic ridge climbing.” They waited until nightfall to
rappel and downclimb a 4,000-foot couloir, which landed them at the base of the glacier. Even in the cold of night, Zimmerman says that the couloir
was “still pretty harrowing, with lots of loose material coming off.” They made their rappel stations in protected spots, in order to limit their exposure
to rockfall and were back to base camp by 12:30 a.m.

“It was a great experience,” Zimmerman says. “Chris and I had a lot of fun together, and besides the loose junk in the middle, the climbing was quite good.
There were some great ice climbs up higher.

“The Saint Elias Mountains are stunning and ripe for adventure and while I don’t have any immediate plans to return, I would absolutely encourage others
to go and get involved. Also, huge thanks to the folks at Ultima Thule for getting us in and out of there safely and efficiently.”*

Ariella Gintzler is a freelance writer based in Carbondale, Colorado. Find more of her work on her website, slowapproach.com.