A donkey wanders across the road and slips from one patch of shade to the next, soft brown muzzle lipping at the ocotillo buds just beginning to bloom in the canyon. I wince, wondering how he isn’t stabbing himself with each nibble. Pro climber and social activist, Tiffany Hensley, and I stand, like statues, our backs to the early morning sun, our blond hair whipping around our faces in the wind. We look west. Our eyes trace the dust trail that announces the arrival of Escalando Fronteras, and I feel a small jitter of excitement dance its way down my spine.

A minute later the great laboring beast of a bus shudders to a halt in the rocks and thirty excited, elementary-age kids tumble out onto the desert floor. Tiffany and I are immediately surrounded—small hands pluck at us, removing our hats and replacing them with their own; sticky fingers tangle in my hair and twist it into what might be considered a braid. I am at their mercy. There is a moment of confusion. Son gemelas? They think we are twins. A girl who is hugging my legs suddenly steps back realizing she doesn’t know me and turns to Tiffany with a confused expression on her face. They trust her, the huera, the light skinned one, among the masses of small inquisitive Latino faces. 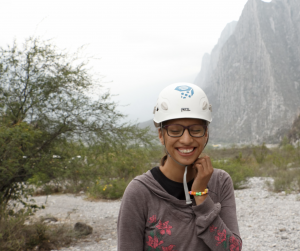 Tiffany smiles, at ease among this bustling crowd, and asks one particularly disheveled looking tyke, Veronica, if she is ready to go climbing. ¿Cómo estás hoy? ¿Estás lista para escalar? Veronica’s head bounces up and down so enthusiastically I momentarily fear she might suffer whiplash.

A year ago Tiffany invited me out to visit and see how I could help with Escalando Fronteras (promoted in the English speaking world as Climbing Borders). After dancing around the idea, I was finally able to pull together a last minute trip down to Monterrey, Mexico—the land of fabled limestone walls and street tacos. I’ve only had feet on the ground for twenty-four hours, but am already itching to tie into the sharp end and test the endurance of my fingertips against the jagged rock that thrusts itself into the blue bird sky in every direction. Yet, as I catch sight of the aggressive, seemingly out of place gestures of some of the kids, I am reminded that, for many, the large city right outside the walls of the canyon, isn’t just the idyllic launch point for a long-dreamt-about climbing trip to Potrero Chico or El Salto.

Alex Honnold brought Potrero Chico into the eye of the general public after his famed free solo of El Sendero Luminoso, which climbs at 5.12+ and rises more than 1,700 feet above the valley floor. Sport climbers looking for long scenic lines come here for a one of a kind experience; clipping bolts on routes that can last for more pitches than one cares to count. Potrero Chico boasts some solid and steep cragging but climbers flock here from across the world for the multi-pitch sport routes.

El Salto, situated on the opposite side of Monterrey, changes character entirely from the harsh desert-scape of Potrero Chico. Although still limestone, the walls swing well past vertical, the mountains become full and lush with vegetation. For many, El Salto is the proving ground of hard Mexican sport climbing. For a solid pump and lots of airtime El Salto—with its giant tuffas and iconic red and black walls—is the place to go.

Monterrey, however, is not just the epicenter of these beautiful climbing areas. It has a darker and more volatile side. According to the Organisation for Economic Cooperation and Development (OECD) of Mexico, 47% of Mexico’s youth drop out of school before graduating.The OECD has also found that kids who display anti-social behavior are four times more likely to become addicted to drugs, thus beginning a vicious cycle. Tiffany has told me that due to the soaring rate of high-school dropouts, easy access to drugs and alcohol, bad economic situations, and violent domestic life, many of Monterrey’s youth end up on the streets. There they often fall into a rhythm of further violence, substance abuse, unprotected sex and gang life.

Started by climber Nadia Vazquez (a Monterrey native) and the U.S. climber Rory Smith, Escalando Fronteras aims to give kids an alternative to gang life in the booming city. Research done by the United Nations has shown that sports have a positive effect on youth and can aid in reversing a plethora of negative life patterns. Many of us know that climbing encourages discipline, teamwork, self-esteem, confidence and humility. For the kids in the program it might be the first time in their lives they are given the opportunity to exercise control, to be courageous and to work together towards a positive end goal.

Tiffany begins to walk with a kid of about seventeen or so, whom everyone calls Oso, over to a pile of climbing gear. I lag a little behind them, both eavesdropping on their conversation and taking in the breathtaking view of the canyon sprawling before me. Tiffany is asking the boy about a recent experiential leadership course he had taken through Escalando Fronteras. His face lights up as he recalls the previous weekend where he had the opportunity to guide inexperienced climbers up a mountain outside of Monterrey. The boy tells Tiffany how he came to realize what comes easily for him was not only difficult for the adults but was scary, too. During the course he discovered that not only could he help the adults face their fears, but also that his encouragement helped them push their limits and succeed. Tiffany looks at him thoughtfully and asks if he feels like what he learned is applicable to our climbing activity for the day. Oso studies the younger kids scampering around him. “Yeah,” he replies, “I suppose I could encourage these guys in the same way and it might help them get up the climbs today.”

Tiffany and Oso are close. I can tell by the way they crouch on the ground together, hands casually sorting climbing gear, their bodies nearly touching. He trusts her. Eventually Oso rises, stretches his long arms over his head, lets out an enormous yawn and gears up to lead a few routes. I take his place squatting on the ground beside Tiffany.

“What is his story?” I thrust my chin towards Oso who is effortlessly flowing up one of Huasteca’s white walls. “Oso?” Tiffany’s eyes follow mine, “He was one of the first kids in the program four years ago. We were going around to the schools in Monterrey recruiting and Nadia found him in a stairwell selling drugs. He had a monopoly on selling toluene.” I raise my eyebrows at this. Tiffany explains. “It’s a pretty cheap paint thinner that gives a slight high; inhale enough of it though and it will kill you. Oso was only fourteen when we got to him.”

Oso has made it to the anchor and is beginning to set up the rope for the younger kids to top-rope the climb. “And now?” It wasn’t a question that needed to be asked and Tiffany lets it go unanswered. I can see what the now is for myself. Oso is at ease on the rock, his hands work quickly and confidently at the anchor and before long he is ready to lower. I marvel at how much he knows about climbing and how much he must have learned in four short years.

Once the ropes are up, the other volunteers and I get every kid into a harness and shoes (gear that has been generously donated over the years to the program). I search for a minute before realizing that there aren’t enough helmets to go around and only the kids actually climbing wear one. Everyone else has to content themselves with staying a safe distance back from the rock. You can imagine what it is like keeping twenty-five unoccupied kids from standing under the climbs—where a rock might hit them —yelling a mixture of insults and encouragement up at their friends who are on the wall. I am flippantly ignored when I ask them to take a few steps back to a safer distance. Eventually I give up, take off my own helmet and buckle it onto the tiny head of Pablito who, so far, has refused to leave my side. The helmet dwarfs him so I can barely see his sparkling brown eyes below the rim.

I spend the rest of the day belaying as one shy child after another steps up to try climbing the rock. They are a bubbling mixture of excited anticipation and fear. I shout words of encouragement from below and keep my belay tight. For many of them this is their first time climbing. It takes a moment, but eventually the bodies on the other end of the rope stop hanging so much, stop speaking and begin climbing for real. With each movement they become stronger, more confident.  I lower kid after kid from the anchors. By the time their feet touch flat earth again they are totally transformed. They high-five me, sending a small puff of chalk into the air before the next kid lines up to take his or her place on the rope. 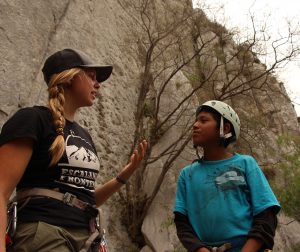 Tiffany Hensley came on board shortly after Escalando Fronteras was conceived and has been the program’s champion both on the ground in Mexico and abroad where she seeks sponsors, volunteers and support from climbers across the world. With her connections in the climbing industry Tiffany is uniquely positioned to connect these communities that reside on opposite sides of the border. Her work has allowed dozens of kids the opportunity to choose a life separate from the one of violence that the city promotes.

Escalando Fronteras just launched a new gofundme campaign aimed at raising enough funds to register the organization under the name “Climbing Borders”  as a 501(c)(3) in the United States. Climbing Borders will become a sister organization for Escalando Fronteras and promote at inner city youth climbing programs both abroad and in the United States.

Jess Lewis is a Colorado native who has spent her life chasing adventure both at home and abroad. She is currently pursuing her MFA in Creative Writing and works as a rock climbing and river guide both in the United States and Chile. Climbing has taken Jess to some of the more remote corners of the world. Inspired by her adventuring and the people she meets along the way, Jess strives to connect people divided by political, cultural and social borders through her writing. Follow her adventures on Instagram at @wandering_tattler.

My Epic: Heart-Stopper in the Potrero