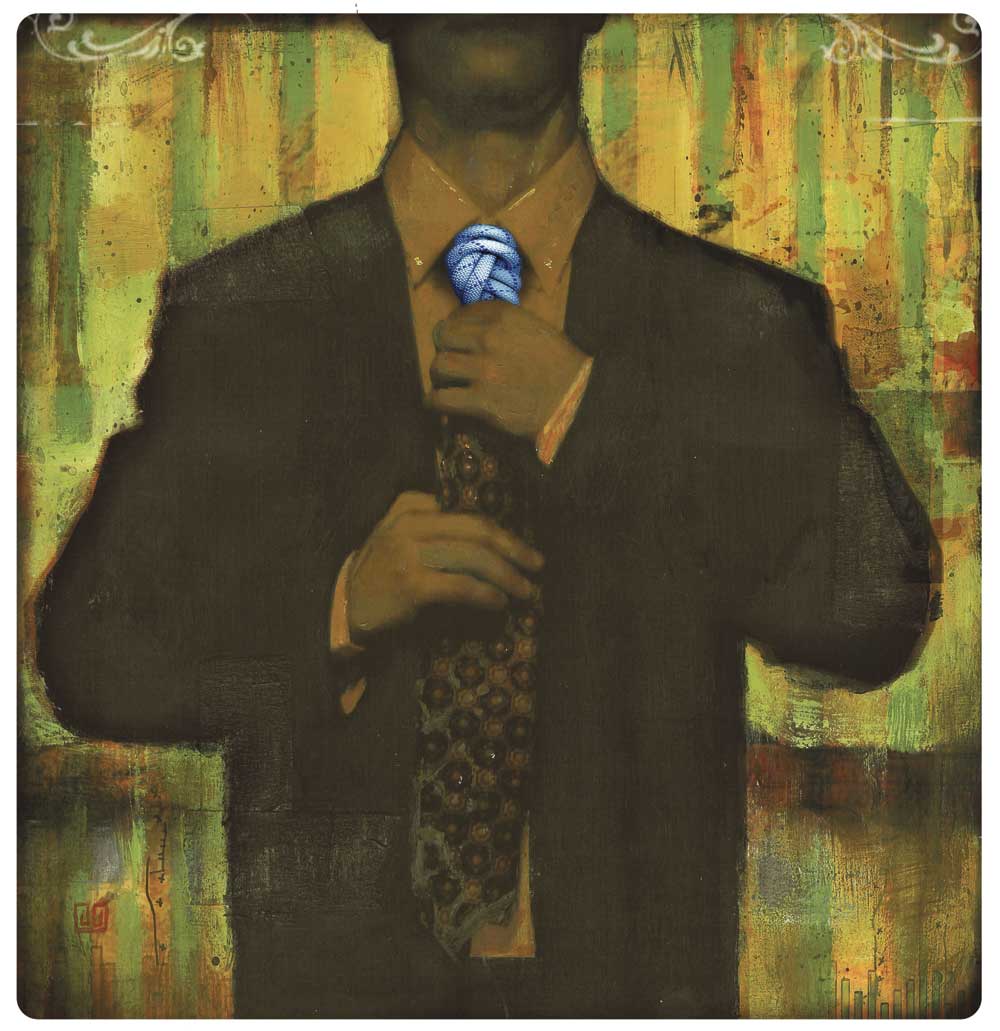 IT’S ALL BUSINESS (UNTIL HE FORGETS ABOUT IT)

“What do I take zinc for?” he asks, rooting among the bottles.

“Compassion and empathy,” I reply.

He looks momentarily disconcerted and then swallows two. Just in case.

It’s not that my husband doesn’t care that I am sick. He does. Passionately. He is this close to sending his project—and a cold at this point would be disastrous. It would serve him right, but I realize how dreadful my life would become if he lost any Training time.

Living with a Very Serious Climber (VSC) is not easy. Life falls into two categories: Diet and Routine. Actual climbing is pretty far down the list. (Don’t confuse climbing with Redpointing, Training or Training For Training.) I’ve been climbing for over 10 years—did my apprenticeship on “VS” in Britain, spent three winters at Hueco and sport climbed 5.12—but our different views of the sport mean that we rarely climb together anymore. Recently, I suggested that we just go to the crag and enjoy ourselves. VSC looked at me as though I had suggested he lose weight by sawing off his leg.

The hardest thing about living with a VSC is Diet. I like to cook and like to think that I am rather good at it. Truth is, I have learned to reject any
obviously “bad” recipes, such as roast chicken in Gruyere—stock, wine and cream, with just a dash of Pernod (add some chopped tarragon and a
handful of rough bread crumbs, and pop in the oven until bubbly and crispy)—and save them for when he goes away on climbing trips. When VSC is home, I concentrate on the “good” cuisines of the Far East: sharp, clean flavors of lime, ginger and chili—with not a gobbet of fat in sight.

VSC’s favorite meal, mind you, is a huge rare steak with a sprinkling of salad.

“Steak,” he informs me, “is a great natural source of creatine.”

A weird dichotomy exists between the diet VSC follows and the one he thinks he follows.

“I’m not really a bread or pasta person,” he once solemnly told me. Yet each day we go through roughly half a loaf of bread plus various bagels, tortillas and pita pockets. For two years, I took him at his word about the pasta, then, suddenly having a hankering for spaghetti al’ arrabiatta, threw caution to the wind.

“Why don’t we ever have pasta?” he mumbled, hoovering it up. “I love pasta!”

This dichotomy extends into tangential areas of his life as well. Last week he proudly announced that he had “a totally Zen lifestyle.” I pointed out that owning nine pairs of climbing pants hardly qualified as Zen minimalism.

Redpoint Mode goes like this. Day One: Try to redpoint The Project. Day Two: Train on an exact replica of The Project that you have built on your climbing wall. This can be varied only if the first redpoint attempt is so wildly dreadful that Day One gets reclassified as a “Working The Moves” day. Day Three is a Total Rest Day, when even unpacking the dishwasher is out of the question. Day Four is My Body Is A Temple Day and very strict. Run, stretch, hot tub, no alcohol, early night. All necessary steps are taken to prevent Day Four from coinciding with any Denver Broncos games, ever.

Training Mode is the same as Redpoint Mode, except you only climb routes and gym problems that you have ruthlessly wired and can do with ease.

“That’s not the point,” explains VSC. “‘Training to failure is failing to train.’”

Usually this means desperately clawing your way up a route you have done a million times, screaming, “Why am I so shit? What is my problem?” etc., until you are fit enough to hike the route.

Only when you can do your pre-training routes without getting even the slightest bit pumped are you ready for Training Mode. Training for Training is the least entertaining phase in the series. (If you have ever wondered why Easy Skanking (5.12b) at Rifle is so polished, that’s because it’s part of both my husband’s Training and Training For Training sets. That’s 300 ascents, by just one person, per year.)

There are rare changes to the Routine. One came up recently, on a cleaning day, when I grabbed the broom only to find that the head was missing. I found this peculiar but not really disturbing, and decided to tackle the bathrooms instead, only to discover that my bucket and rubber gloves had vanished. Now this was really odd because, although in my heart of hearts I knew that VSC was at the bottom of all this, I could not imagine how. I am sorry if this sounds sexist, but he does not clean much around here. I took a closer stock of my environment and found other small discrepancies: where were the plastic yoghurt containers from the recycling pile? Where was the hammer I had put out to remind me to fix the clothes dryer?

I challenged VSC with these mysteries as soon as he walked in the door.

After several moments of pointed silence he grasped that this explanation might not be entirely adequate and in rather a hurt tone said, “The Intifada, darling.”

“My route! My route at Rifle!”

Good. God. Of course. The bolting moratorium at Rifle has just been lifted and VSC was bolting his new überclassic of this name. However, this still didn’t, in my mind, clear up the cleaning-products business.

By which I divined that we were now in the rare situation of being not just in Redpoint Mode, but in First Ascent and Redpoint Mode. I’m not going to give you the details of First Ascent Modes—because, to be frank, they’re not pretty, and can last for years.

The point is that VSC enjoys working routes. When asked why, he replied that working a route was like a relationship: It took hard work, curiosity and even love to figure out the nuances and the moves required for success. By comparison, a vue was like a one-night stand. Slam, bam, thank you, ma’am. (Besides, if you only really climb close to home, a routine barely interrupted by trips for the past seven years, your opportunities for on-sights are pretty much exhausted.)

Eventually, the day arrives when he redpoints his project. VSC wanders around in a post-coital haze for a few days, but like any small-town Lothario, he already has his eye on another project. Back we go to Training Mode.

Fiona Lloyd lives in New Castle, Colorado. Dave Pegg, the VSC in this story and a former editor at Climbing and Rock and Ice writer, passed away in 2014.