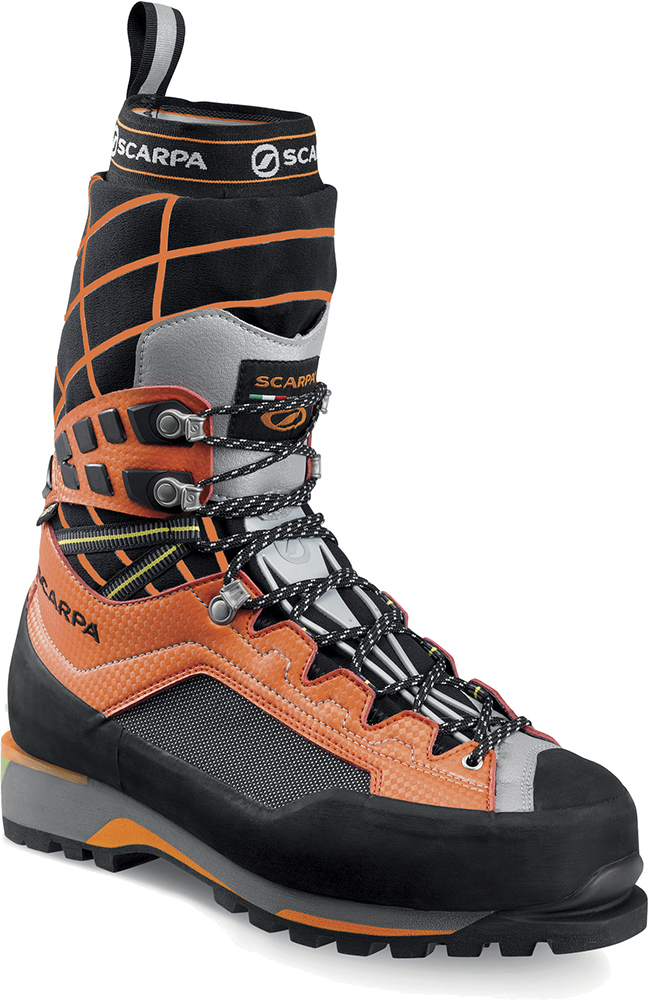 Last winter, Rock and Ice tested and reviewed the Asolo Eiger, a forward-leaning ice and alpine boot that was lighter, less bulky and more agile than anything out there. The boot was so impressive we gave it a Best In Gear (B.I.G.) award, an accolade as hard-earned as spousal praise.

Now, Scarpa has unveiled the Rebel Ultra GTX, a model that is in the same class as the Eiger, but about four ounces lighter per boot and even trimmer. Caveat: The Rebel is lighter and trimmer because there’s no spat over the laces, the rands are shorter, it lacks a conventional tongue, and the upper is all synthetic. The Rebel is also less warm.

I wore the Rebel on a variety of terrain, 39 pitches that included slabby WI 2, vertical WI 5+, overhanging M8 drytooling and traditional mixed. I also hiked a lot, and was out in temperatures below zero.

I’ve heard the svelte Rebel lauded as having “mixed boot” performance. I wouldn’t go that far, but the Rebel does climb closer to a mixed boot than it does a mountaineering boot. It is agile and so light on the foot it doesn’t feel at all like a boot. It’s more like a shoe. Still, compared to any mixed boot, the Rebel is a step down in performance, as a boot with a crampon clipped to it can never keep up with a shoe and integrated crampon.

For old- and new-school mixed, the Rebel is an excellent choice for someone considering a mixed boot, but who prefers the practicality of being able to remove the crampon to hike or drive or rock climb.

The Rebel did well for me on steep waterfalls. It was plenty rigid provided I cranked down the ankle laces, and toe protection was good. I got very little heel lift. Anyone who has climbed in a traditional leather or double boot will find the Rebel as liberating as sawing a cast off a leg.

Part of the reason the Rebel climbs and feels so good is because it is soft. A carbon-fiber insole makes the boot rigid heel to toe, but the upper is Cordura and Kevlar with a thin layer of insulation. Most interestingly, the boot lacks a conventional gusseted or bellows tongue. Instead, the upper is essentially a mono-sock that you slip on—it’s the slipper of the boot world. Because of all the foot-conforming synthetic materials, and because the ankle is also unconventional with floating “wings” instead of a rigid cuff, slipping into the boot is like sliding into the cockpit of an F1 racing machine.

A mid-shin-high, built-in stretchy Gore-Tex gaiter seals around your leg like a hungry remora. A flake of snow turned edgewise could not squeeze past this security system. I like that, but the gaiter makes the boot desperate to pull on, and at times I strained so hard I thought I might rip either the finger loop right off the boot or my fingers right off my hand.

Once the Rebels are on, the wrestling match is behind you, so it isn’t a big deal, just something to note if you are expecting a boot that you can quickly slip into. The gaiter is also so snug you will be inclined to keep your pants on the outside. Tucking them into the gaiter is tough, especially with pants that have a bulky crampon-protection patch. This means, if you have pants with wide cuffs, you sometimes can’t see your feet as well as you’d like.

I wore the Rebel down to slightly below 0 degrees F and that was pushing it, unless I was active, either climbing or hiking. Down to 10 degrees F (or so) I was usually fine, depending on other conditions such as wind and whether I was standing in deep snow. In Colorado, the Rebel is a four-season boot if you are moving. In colder climes such as Canada, I’d think of the Rebel as a three-season boot. It is warmer than a single boot, but not as warm as a double boot. To be more precise, the insulation in the Rebel seemed about what you would expect from wearing a second pair of thick socks.

I used the BD Stinger crampon and it attached securely although I was worried because the boot sole is so thin at the toe there’s scant material to hold a bail. I can see a crampon popping off if it isn’t really cranked down—I had mine so tight I could barely engage the heel lever. I also used the crampon toe strap (some people hate these and cut them off) and reefed that down so tight I could feel it through the boot.

The really bad news is that the Rebel is already being discontinued, replaced by a more familiar design, the “Pro.” (Look for a review of the Pro in an upcoming issue.) This is, I think, a shame because the Rebel is the most technically advanced boot yet to set foot in the mountains. I guess there just aren’t that many climbers willing to try something so outside the box. The good news is that Scarpa is going to keep selling the boot until their inventory is depleted.

ABOUT THE RATING: The Rebel received four out of five possible stars, with one star deducted because it is so blasted hard to put on.

• Unconventional design, with no tongue and a floating ankle.

• Three-season warmth, but pushable to four-seasons in most lower-48 conditions.

• European fit on the narrow side, but the boot forms to your foot and can widen with use.