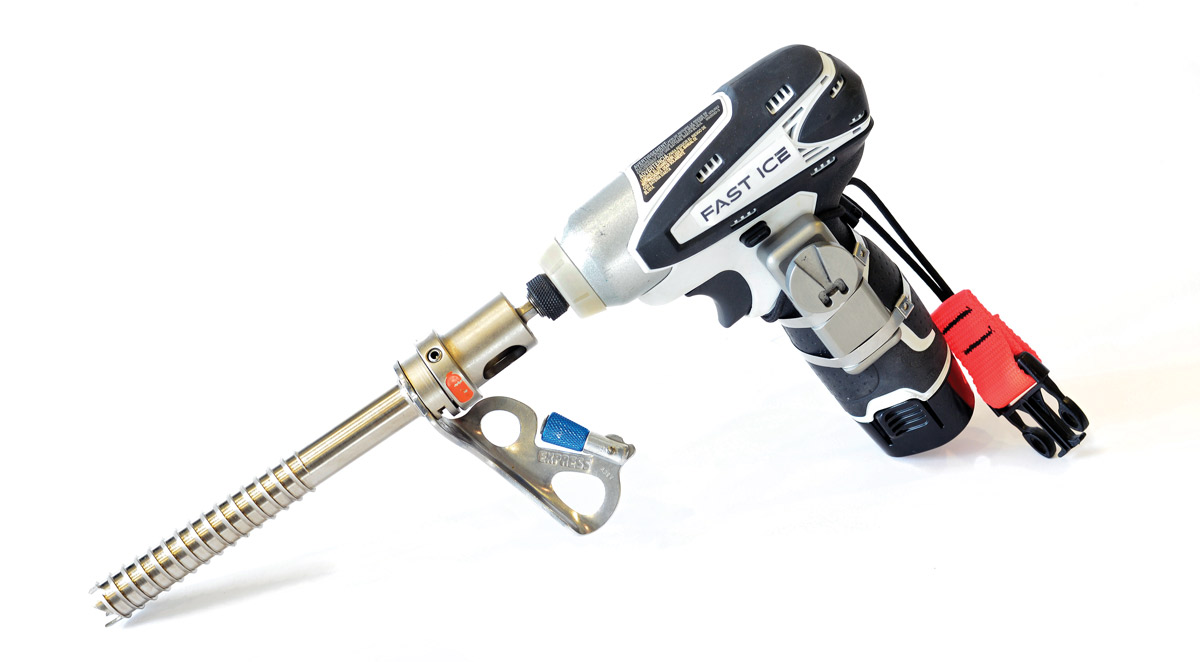 Reviewing gear is like getting old. Changes in the equipment
are gradual. Then you look at a photo from a decade ago, gasp and say, “Oh, man, I used to have hair!” or, “We climbed in those!”

The Fast Ice cordless drill offers an alternate reality, one where everything is completely different at a snap of the fingers. The Fast Ice screws ice
screws into ice for you. With the Fast Ice you often don’t have to chop away surface ice or peck a pilot hole. Nor are you forced to place the screw
at chest level or below and immediately be run out. The Fast Ice blasts the screw right through most surface crud or even between icicles without damaging
precious ice, and you can place pro as high as you can reach, up or way off to the side. Instead of getting pumped twisting in the screw, you just
pull the drill trigger. Want a screw over the lip of that ice curtain? ZAP!

The new system does take practice. Loading the screw into the drill isn’t hard, but you can fumble. Extracting the drill from its chest holster is a subtle
lift and turn, an operation you can flub in a moment of panic. It took me several days to become adept. You probably won’t like the Fast Ice the first
day, maybe two. Stay with it. I can now load a screw and unholster the drill in seconds. It helps to keep the drill adapter and chuck slicked up with
the included lube, and adjust the holster and harness just right for you.

Drilling a screw into ice takes 10 to 20 seconds, depending on the ice hardness and screw length. One battery will zip in 15 to 25 6-inch screws in water
ice, with performance varying due to ice conditions, screw length and whether the spinning hanger has to carve away ice. Carry the second pocket-sized
battery and you have enough power for a full day of ice climbing. The Makita impact drill used for the Fast Ice arrives with two lithium-ion batteries
that weigh six ounces each and juice up on the included charger in an hour. I used the drill in single-digit temps and found the cold didn’t appreciably
affect battery performance.

Ice climbing is all about sensory input from tools, crampons and ice screws. Hand place a screw and you feel whether the ice is dense or soft, solid or
hollow, or in between. Although the Fast Ice is a power tool, you do develop a feel for ice quality and placement reliability.

Weight is over three pounds and up to four for a large rack of screws. The drill with the special ice-screw chuck is 2 pounds 2 ounces. Add 13 ounces for
the shoulder holster, and 1.4 ounces per screw for the drill adapter that slots onto either a Black Diamond or Petzl screw. The adapters are $19.95
each and don’t alter screw performance— you can still place and remove the screws by hand. If you decide you don’t want to carry the drill on
an alpine route, you can remove the adapters in a few seconds.

Ice climbing inherently requires a lot of gear and junk, and the Fast Ice adds more to that: You wear a drill under your arm, and have more straps and
cords and stuff to deal with. Most of the time the Fast Ice isn’t a big bother or in the way, but when you are in close quarters it can be.

Worth it? A confident, seasoned ice climber can place a screw by hand almost as quickly as with the Fast Ice—this won’t be a game changer for that
crowd. For everyone else, the Fast Ice can make a difference. The mere thought of being able to place a screw anywhere the ice is good and with little
effort is a serious bump in confidence. The screw gun can also improve safety: Instead of running it out because you get too pumped placing screws,
you can zip them in every body length if you desire, and before you know it, you’ll be looking at photos, gasping and saying, “Oh, man, I used to place
screws by hand!”