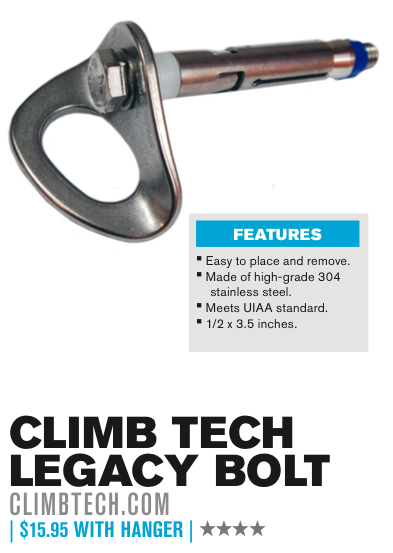 Growing up in the 1990’s wasn’t easy—just look at the pants we wore. Thankfully, most of us have changed our pants. The same can’t be said, however, for many old sport crags, where bolts can be dangerously manky.

Fact is, the only way to keep routes safe over time is to monitor the bolts and replace them when needed. Unfortunately, this process can require chopping an old bolt, patching the hole and moving the bolt. With the Legacy Bolt, Climb Tech gives first ascentionists and route refurbishers another choice.

The Legacy Bolt is the first fully removable hanger/bolt combo. The Legacy is made of high-grade stainless steel, meets the UIAA standard of 20 kN for tension loading, and is placed nearly the same way as your standard mechanical bolt.

The difference is when you need to replace it. Then you essentially loosen the Legacy and wiggle the entire bolt out of the hole. The removal process can take patience, prying, tapping and jiggling, but is still miles easier and better environmentally and aesthetically than the old chop-and-patch method.

At $15.95 each, the Legacy costs more than three times as much as a plated half-inch Powers 5-piece/hanger combo, the current go-to for most climbers putting up routes. This might be cost-prohibitive for dirtbags, but organizations such as the Access Fund and American Safe Climbing Association have reviewed the Legacy Bolts and are considering them for their rebolting efforts. You should, too.

Ratings range from one to five stars. 5 stars The best in its class, with no major shortcomings and
competitive pricing. 4 stars Product is among the best and innovative, but can have one or two minor
flaws. An overly high price can count as a flaw. 3 stars Good but average, with no standout or innovative feature. Might have more than two minor flaws. 2 stars Has a serious flaw or shortcoming that compromises performance. 1 star Gear has serious issues and
isn’t recommended.