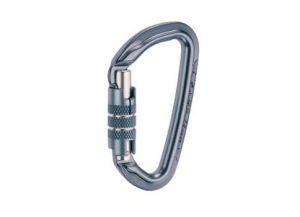 The past couple of years, carabiner manufacturers have burned the midnight oil liposuctioning away precious grams. Now, CAMP has unleashed its latest creation, the Orbit Twist Lock, which, weighing 1.85 ounces, is the world’s lightest twistlock carabiner (there are lighter screwlocks, such as the 1.46-ounce DMM Phantom.)

About 3.85 inches long and with a gate opening of .7 inches, the Orbit Twist Lock is a small carabiner. The Orbit isn’t designed for large locking-carabiner applications, such as connecting to an anchor master point; rather, its domain is for personal anchoring, such as attaching your daisies/slings to ascenders or clipping yourself in to an anchor. For those purposes, the small size isn’t a bother and the carabiner is so lightweight you can carry multiples and, like silver dollars, never have enough of them. I also liked that, whether due to the carabiner’s small frame, shape or light weight, the Orbit was less prone to flip and cross-load, making it my choice for use with a Grigri. The Orbit, however, didn’t work well with wide-frame devices such as the Petzl Mini Traxion, the carabiner’s acute contours caused it to bind when clipped through the device.

I’ve always been a twistlock fan, but am often frustrated by the multiple awkward gyrations some require to twist, push and pull them open. The Orbit’s opening mechanism, rotate the collar and pull the gate back, is simple and I could even easily do it in gloves. However, the Orbit, like every twistlock carabiner I’ve used, can freeze up, becoming inoperable in icy conditions. New for 2010, the Orbit Twist Lock sports a keylock nose, a nifty bit of sleekness that prevents ropes, cordage and wires from snagging.