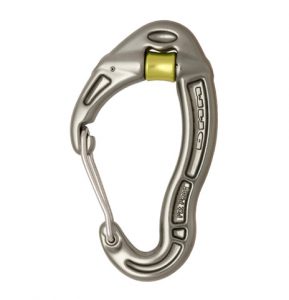 Friction, the resistance of motion to surfaces that touch, is paradoxically a friend and foe. Underfoot, we can’t get enough sticky friction. But when we drag the rope up rock, we do anything possible to avoid it. Though reviewed just three issues ago, the DMM Revolver is worth a second look, being the first–and only–carabiner built to fight friction. An integrated, self-lubricating pulley wheel in the Revolver’s rope-bearing arm reduces rope drag 40 to 47 percent, according to DMM. To test the claim, I clipped an 80-pound load to a rope and ran the rope up and through a regular carabiner clipped to an overhead sling, hauling-style. Even with both hands clamped firmly on the rope, I couldn’t budge the weight. Next, I replaced the regular carabiner with the Revolver and easily hand-hauled the weight.

The amount of friction-reducing benefit you see on lead varies according to how much or little the rope twists and turns, and whether the rope tracks completely or only partly across the pulley. In ideal conditions, the Revolution reduces rope drag as much as a single over-the-shoulder runner with biners. At $03 a pop, you’d go broke rigging every draw and sling with a Revolver, but it’s great to have a few on hand for those pesky off-to-the-side pieces, or for using as impromptu pulleys for hand-hauling.